The UK Centre for Ecology & Hydrology (UKCEH) has made a major contribution to a series of new reports for the Government’s independent advisory body on climate change. The research commissioned by the Committee on Climate Change aims to address gaps in knowledge about the potential risks posed by global warming to humans and the environment.

UKCEH led one of the six reports, which investigated the impact of climate change on the natural environment, while our experts on flooding, hydrological analysis and greenhouse emissions from land use contributed to some of the other reports.

The reports, along with other research published over the next year by a total of more than 130 organisations, will be incorporated into an Evidence Report produced by Committee on Climate Change (CCC) in July 2021. This will inform the Government’s official third UK Climate Change Risk Assessment (CCRA3), leading to new plans and policies to build the country’s resilience as the climate changes.

The UKCEH-led report on impacts on the natural environment gathered new evidence on the thresholds at which ‘non linear' changes – where the effects are complex and not proportional with an increase in temperature – take place in an ecosystem. It then estimated the economic cost, including lost production of crops, milk, timber and fish, and increased water treatment due to more algal blooms.

The scientists involved in the report looked at different temperature scenarios, and found the environmental tipping points and costs varied between regions of the UK.

Alice Fitch, one of the UKCEH authors of Climate-driven threshold effects in the natural environment, explains: “Our analysis found the impacts caused by climate changes are expected to increase in frequency and severity in the future, potentially leading to irreversible changes such as peatland loss, permanent loss of topsoil, shifts in ranges of species and loss of the economic viability of certain trees.

“Economic damages vary from tens of millions to billions of pounds annually for each threshold.”

The impacts caused by climate changes are expected to increase in frequency and severity, potentially leading to irreversible changes - Alice Fitch, geospatial modeller at UKCEH

The report highlighted a range of options to limit the damaging effects, including: reducing nutrient pollution from fertilisers into lakes and rivers; rewetting of peatlands; planting trees next to water courses for shading; and using species that are more resilient to climate change when woodland planting.

Another of the reports, led by Sayers and Partners, which investigated projections of future flood risk, was co-authored by UKCEH senior mathematical modeller Dr Alison Kay. This warned the cost of the combined damage from coastal, surface water, river and groundwater flooding could potentially double in the UK, to around £4 billion by the end of the century without strong action. Projections of Future Flood Risk said damage could only be kept to a relatively low level by cutting greenhouse gas emissions in order to limit global warning to 2 degrees Celsius, combined with significant measures to reduce the flooding risk to homes and businesses.

Three of the four other reports commissioned by CCC also drew on UKCEH’s scientific expertise:

The sixth report commissioned by the CCC investigated projections of future water availability, and was led by HR Wallingford.

All the research can be found on a new website dedicated to CCRA3 Evidence Report. See www.ukclimaterisk.org

The new pieces of research commissioned by the Committee on Climate Change were part-funded by Defra, the Devolved Administrations in Scotland, Wales and Northern Ireland, plus the UK’s research councils. 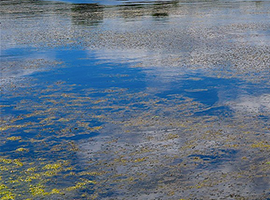 Climate change is predicted to cause an increase in algal blooms, threatening biodiversity and meaning water treatment costs rise