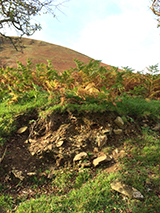 What is the UKCEH Countryside Survey?

It is a globally unique audit of the soil and vegetation of Britain. It began in 1978 with further surveys in 1990, 1998 and 2007.  Since 2019 the monitoring has transformed into a NERC funded research platform based on an annual rolling program to measure soils and vegetation that will repeat ~5 years. This makes the program more resilient to annual weather events such as flood and drought.

How does it work?

Soil and plant species composition are recorded in five random quadrats within a sample of 1km squares scattered across England, Wales and Scotland. These squares are stratified by Land Classes1 that divide up the land surface of Britain into areas with similar climate, geology and soils. 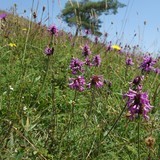 The robust statistical design of the survey, that co-locates plant and soil measurements, offers opportunities to study how the plant-soil-system is responding to climate, land use change and other drivers. For example, air pollutants impact soils and plants directly and indirectly. By combining UKCEHCS with UKCEH air and water quality monitoring, it is possible to determine impacts of pollutants on vulnerable systems.   Being able to simultaneously measure their changes can answer questions about the recovery of soils from historically high sulphur deposition.  UKCEHCS can also help us assess whether external drivers have held back or facilitated land management for food and timber production, or influenced other public goods such as nectar production and habitat restoration. In addition, the data have historically provided input to other national initiatives such as the Office for National Statistics environmental accounts. Internationally, it provides a response to the United Nations F.A.O. call to monitor the status and trend of soils, and the IPBES.

Because the UKCEH Countryside Survey is an unbiased sample of the soils and common plants of the wider countryside it also tends to focus on those habitats that occupy the largest land area. These constitute the rural factory floor of the British countryside. They have attracted billions in agricultural support and agri-environment funding, produce respectively 52% and 30% of the nation’s annual demand for food and wood and provide the ecological fabric within which rarer habitats and species as well as human settlements are embedded.

Why plants and soils?

The UKCEH Countryside Survey measures the way common plants are distributed across the countryside and how they have changed in abundance over time. Common plants are important because they make a disproportionately large contribution to ecosystem functioning and therefore to the delivery of services that benefit humans (grassland agriculture, carbon storage, nectar provision, soil stabilisation, noise mitigation, air pollution and lowland flooding reduction and provision of a breeding habitat for many bird species).  Rare species are the jewels in the crown, but the more common plants are the heavy lifters that freely deliver many aspects of human life support. It is therefore vital to know how they are changing and why.

Soils grow our food, store more carbon than forests for combating climate change, contain a quarter of global biodiversity and provide important resources such as antibiotics but are vulnerable to human activity and degradation.  Monitoring the state and trend of soils is the only way to assess their condition and protect this valuable resource. Caring for soil and the ecosystems they support must rank alongside air, water and biodiversity for maintaining earth's life support systems and our nation’s heritage.

See the UKCEH Countryside Survey website which contains a wealth of information and detail on the earlier Surveys. It provides access to findings, reports, data and analyses.