*This is part of an overall MOT4Rivers project led by the University of Stirling.

For centuries, human activities have impacted our rivers by shifting the sources and combinations of physical, biological and chemical drivers and pressures. However, our understanding of the impact of these pressures on ecosystems has been limited by viewing each in isolation and not considering their combined effects.

There have been significant reductions in some pollutants (such as nitrogen and phosphorus) in recent decades but the picture of water quality in rivers has been made more complex by increasing numbers of emerging contaminants of concern (for example, pharmaceuticals, pesticides, illicit drugs, microplastics). This means that freshwater species are being challenged by a combination of pollutant cocktails (mixtures) whose effects are poorly understood. At the same time, climate-change driven shifts in water quantity (more frequent floods, longer periods of low flow) and warming waters are expected not only to be influencing the function, physiology, abundance and biological timings of freshwater ecological communities directly, but also the delivery and potential toxicity of these cocktails.

Our wastewater systems and combined sewer overflows transport these emerging pollutants from our cities and towns into our freshwater environment. Increasing urbanisation and changes in rainfall intensity and its seasonality, plus different catchment processes all have the potential to increase inputs of these emerging contaminants to the environment and freshwater species that live there.

There are substantial knowledge gaps around the effects of hydro-climatic and land use changes in combination with different mixtures of chemicals on freshwater species. Our research will address these gaps through innovative technologies and transformative data analytics to deliver a step change in our knowledge and understanding.

Our approach has three strands:

This research will develop the evidence base to understand changing pollutant sources, delivery pathways and the environmental tolerances and boundaries within which organisms can thrive and flourish. Together, MOT4Rivers will inform priorities for policy, regulation and investment to design cost-effective measures to promote and enhance sustainable freshwater ecosystems under a changing climate. 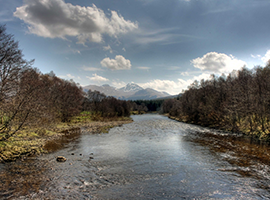