Targeted local action would be the most effective way to protect UK nature conservation sites from atmospheric nitrogen pollution, according to new research that will inform government policies.

Nitrogen pollution from agriculture, industry and road traffic is a major driver of biodiversity loss in the UK, and a study led by the UK Centre for Ecology & Hydrology (UKCEH) explored options for mitigating its impacts on sensitive habitats and species.

The research was carried out for the Joint Nature Conservation Committee (JNCC) as part of the Defra-funded Nitrogen Futures project. It provides each of the four UK nations with up-to-date evidence to design measures that further reduce the impact of air pollution on sensitive habitats.

The modelling study indicates that while national measures have an important role to play in reducing background pollution levels that can harm sensitive habitats, a ‘one size fits all’ approach is not the best way to combat the complex mixture of UK pollution sources. It found that focusing mitigation efforts on the immediate surroundings of conservation sites close to nitrogen pollution sources would produce the maximum benefit, while by contrast, sites in more remote locations would benefit most from emission reductions across the UK and from abroad.

Spatial targeting options that were tested in the modelling included introducing low emission 'buffer zones' around nature conservation sites, or planting trees to intercept airborne nitrogen before it reaches the sites.

“The project allows us to demonstrate that, depending on where you are, and what the main sources of nitrogen input are locally, different measures are needed to protect each site. A ‘tool-box’ approach where you can choose the most effective measures for a particular area will not just maximise benefit to each site, but also be most cost-effective.”

In 2017, over 57 per cent of the area of sensitive habitat in the UK had deposited pollution above thresholds where it is harmful to sensitive habitats, the UKCEH-led Trends Report 2020 for Defra found. There is increasing evidence that nitrogen pollution has driven local extinctions of sensitive plant species across the UK, reducing the richness of habitats and contributing to declines in populations of insects and other animals that depend on nitrogen sensitive species for food and habitat.

Professor Alan Jenkins, Science Director at UKCEH, says: “Our research into mitigating the environmental impacts of atmospheric nitrogen pollution, such as this latest study, includes finding solutions to biodiversity loss.”

Choosing the most effective measures for a particular area will not just maximise benefit to each site, but also be most cost-effective - Dr Ulli Dragosits

The Nitrogen Futures project is coordinated by JNCC in partnership with Defra, the UK Devolved Administrations and the Country Nature Conservation Bodies. The scenario modelling was undertaken by a consortium led by UKCEH in collaboration with Rothamsted Research, Aether, Air Quality Consultants (AQC), Lancaster University and Manchester Metropolitan University.

Environment Minister Rebecca Pow says: “Projects like Nitrogen Futures will be critical in helping us find the best ways to not only meet our emission reduction targets, but also to most effectively support wildlife and the countryside. Air pollution overall has fallen in the UK since 2010, but more action is required both here and abroad to protect precious areas of natural beauty which have been damaged by decades of harmful emissions. Through sharing our knowledge and expertise with other countries, we can lead the way in tackling it.”

JNCC Chief Executive Marcus Yeo adds: “Nitrogen Futures is a ground-breaking project that will support policy development to decrease air pollution emissions and protect biodiversity. Air pollution has no boundaries, and we are delighted the UK countries are working together to tackle this important issue.”

A variety of human activities such as fertiliser use, livestock rearing, transport, waste processing, industry and power generation release nitrogen into the air, in the form of either ammonia (mainly from agriculture or waste management) or nitrogen oxides (mainly from combustion processes).

The different forms of nitrogen emissions can have an impact on sensitive ecosystems through increased nitrogen concentrations in the air and when the nitrogen compounds are deposited onto vegetation and soils. This leads to over-enrichment (eutrophication) and acidification.

This atmospheric nitrogen input to ecosystems affects ecological functions, mainly by allowing nitrogen-tolerant plants to out-compete more sensitive species. This results in negative impacts on the plants themselves or animals within the food web, including vegetation change, local extinction, increased sensitivity to frost, drought or diseases.

The Nitrogen Futures project was one of the projects explored in the December 2020 edition of CIEEM's InPractice magazine. Read the article Use it or lose it: making our evidence about air pollution work for beneficial ecosystem change (PDF, reproduced with kind permission of CIEEM) 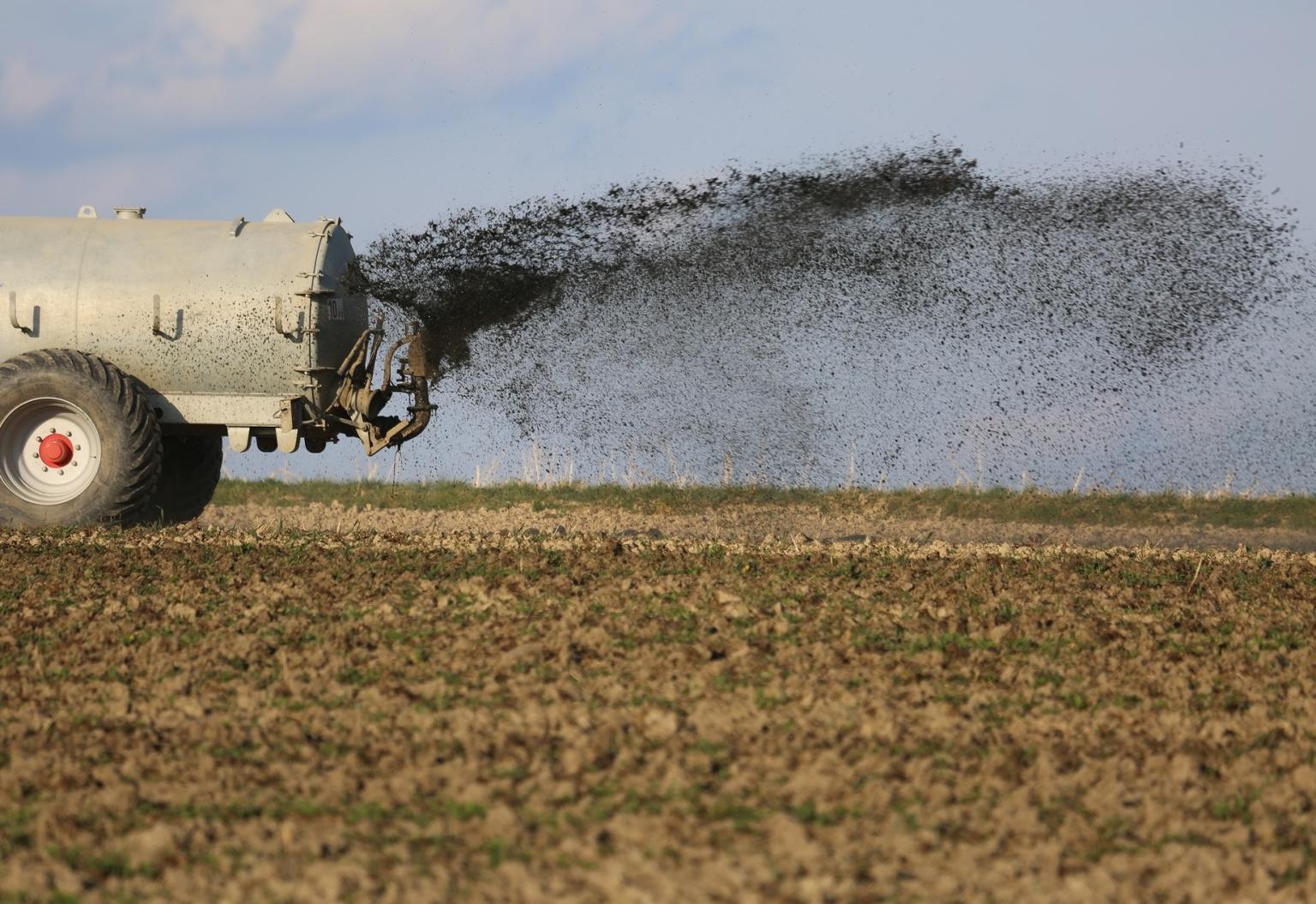 Slurry spreading is a significant source of ammonia pollution, though many farms are moving away from splash plate machinery, above, to lower emissions systems. Below, examples of healthy and decomposing Sphagnum moss 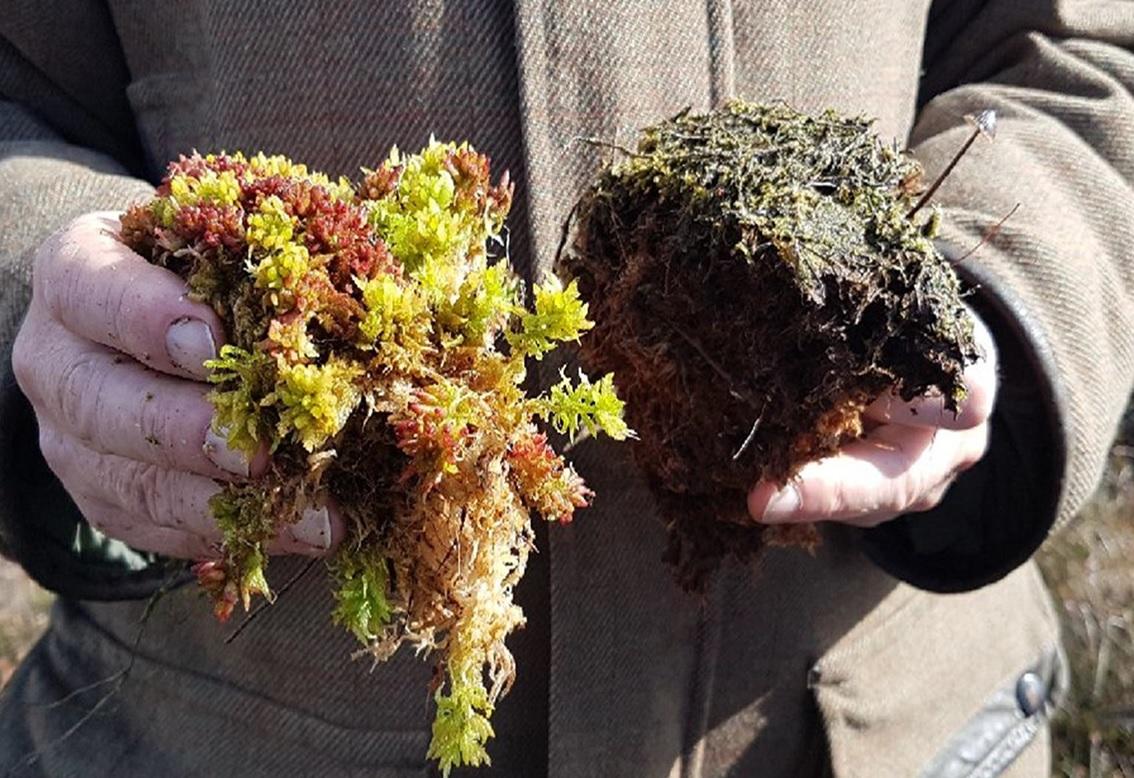