Sarah Burthe and Stefanie Schafer of CEH provide the latest update from the MonkeyFeverRisk project, a collaboration between UK and Indian researchers to investigate Kyasanur Forest Disease (KFD), an emerging tick-borne disease in India..

The first two weeks of October 2018 saw the initial stages of the ecological data collection part of the MonkeyFeverRisk project. This project, funded by the UK Global Challenges Research Fund, aims to understand why the potentially deadly Kyasanur Forest Disease, also known as Monkey Fever, is spreading in forest ecosystems in India.

The project will collect both social data, to understand why particular people are most at risk of contracting KFD, and ecological data, to look at whether changes in tick or host abundance or diversity associated with deforestation, may be behind the disease spread.

Although lots of information has been published on which tick and host species are susceptible to KFD infection, we currently lack good understanding of how different hosts and vectors are associated with particular habitats and how these differ between sites that have seen human cases of KFD and sites where KFD appears to be absent.

"...we currently lack good understanding of how different hosts and vectors are associated with particular habitats and how these differ between sites that have seen human cases of KFD and sites where KFD appears to be absent."

Our initial fieldwork pilot aimed to test and refine methods for effectively collecting samples and data from villages across the Western Ghats area of India and took place close to Thirthahalli in the Shimoga District, an area which has seen high numbers of human cases of KFD in recent years.

These now field-tested and optimised protocols will be used to collect data on ticks and hosts during the upcoming key period when KFD risk is high, between December and February. 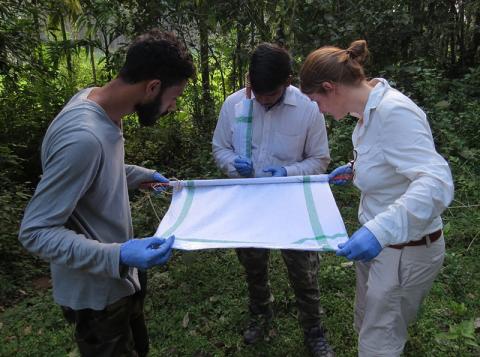 Cattle are thought to be important in the KFD cycle if they act as hosts for adult ticks and therefore increase tick numbers, even though they are not thought to get infected with KFD. In order to relate cattle habitat use to the risk of them acquiring ticks, cows were fitted with GPS collars and their movements tracked for three days. Ticks were counted and removed from the neck area of each cow before and after the GPS tracking, allowing us to quantify the acquired tick burden during these three days and relate it to the cow’s movements. 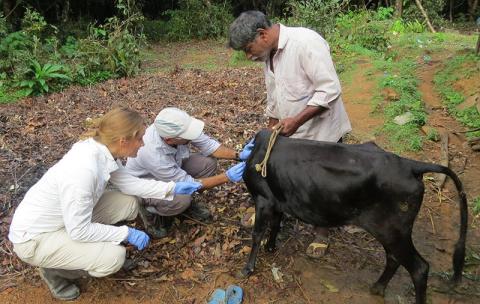 Photo: Ticks were counted and removed from the neck area of each cow before and after three days of GPS tracking

Rodent species are thought to be natural wildlife hosts for KFD but little is known about which species are found in particular habitats or whether density or species diversity vary between villages. We trapped rodents in a variety of habitats surrounding the village in order to look at rodent abundance and diversity and to estimate the number of ticks on each rodent.

The main species found so far on the pilot trapping were white-bellied wood rats (shown in photo above), house shrews and small Indian field mice. Larval ticks were found on a number of rodents.

Finally, as the project also aims to understand how the risk of acquiring ticks by humans varies between habitats and activities at different times of the tick season, we directly sampled ticks from the clothing of humans going about their everyday activities in order to relate this to use of different habitats such as rice paddies or forest plantations.

With the methods now established and the data collection teams fully trained the next steps in the project will be to collect similar data across a large number of villages across the Western Ghats region, comparing between villages where moderate or large numbers of KFD cases have recently been reported and villages where there has been no evidence of KFD. This work will start in December 2018.

If you are a stakeholder or researcher in OneHealth or zoonotic disease and would like to join our OneHealth network, or simply find out a bit more information on our project then please get in touch with us by email to beth@ceh.ac.uk or slhoti@yahoo.com

The MonkeyFeverRisk project is supported by the Global Challenges Research Fund and funded by the MRC, AHRC, BBSRC, ESRC and NERC [grant number MR/P024335/1].

Bringing together a One Health network of stakeholders 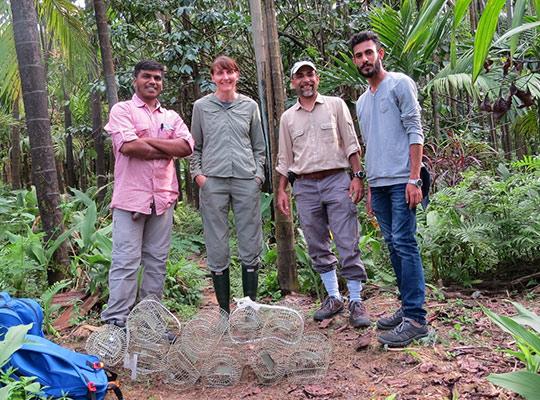 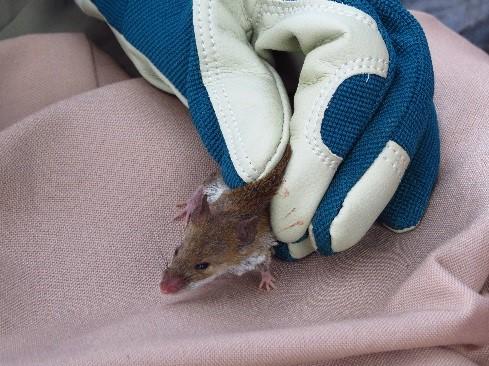