Dr France Gerard provides the latest update from the MonkeyFeverRisk project, a collaboration between UK and Indian researchers to investigate Kyansur Forest Disease (KFD) or Monkey Fever, an emerging tick-borne haemorrhagic disease in India. The MonkeyFeverRisk project will ultimately provide tools and information to be used by disease managers working directly with affected communities. One of the strands of work is a field campaign to understand and map human and ecological risk factors across affected areas...

Following the project’s first stakeholder workshop in Bangalore in early August 2018, I left with four ATREE Research Associates (Gowri Uday, Anusha Chaudhary, Abhijit Kumar and Mujeeb Rehman) for a five-day field survey in the Shivamogga District. Our team set out to collect the location of areas, representative of the land cover and land use types present within Shivamogga, for the validation and improvement of our brand new satellite-derived land cover and use maps. 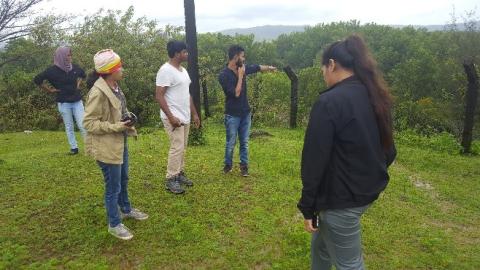 The presence or absence of types of land cover and use, and their relative position in the landscape, is expected to be a major driver of Kyansur Forest Disease. Humans are exposed to KFD as they use forests in different ways, while the tick vectors and mammal hosts involved in spreading KFD are also sensitive to the available forest and cropland habitats. Accurate land use maps are therefore vital to create the geographical models that will identify which communities are most vulnerable to KFD.

The presence or absence of types of land cover and use, and their relative position in the landscape, is expected to be a major driver of Kyansur Forest Disease.

Existing maps are either not suitable, not up to date, or lack the spatial detail that could reveal important links between the disease and landscape patterns, such as deforestation or agriculture-forest-human interfaces.

We chose to use satellite imagery acquired in 2017 and 2018, and tried out a variety of classification options and imagery, to produce the required land cover and use maps. The collection of reference points in the field (i.e. the observed land cover or use type with recorded GPS location) forms part of the mapping process called ground-truthing, and enables us to work out which classification serves best to validate the resulting maps. 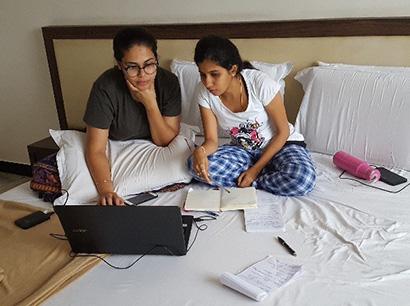 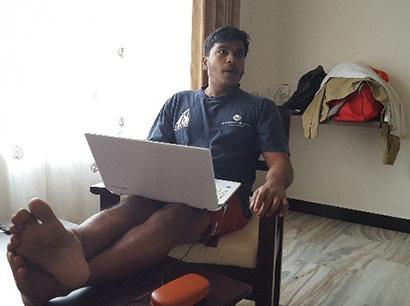 No respite for the team: Whilst Anusha, Gowri are evaluating the reference points collected on our first day, Abijit is improving the App ready for the next day.

The field survey also allowed us to test an App designed by one of our team to effectively and quickly collect these reference points on a Google Earth backdrop. It is important to collect a large number of points that are distributed across the entire district area and have a good representation of the land cover and use types of interest and those found within the district. 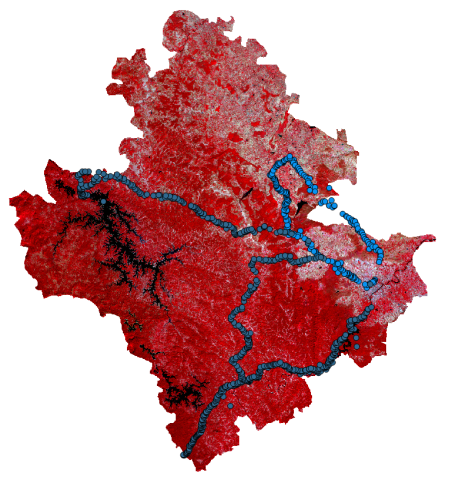 Above: Satellite image of Shivamogga District showing the distribution of the >1200 reference points collected during our field survey. Shivamogga spans an area of 8,495 km2 in Karnataka state

Although this year’s exceptional Monsoon rains forced us to stick to the main roads to avoid dangerously flooded areas and muddy routes, we collected more than 1200 reference points (shown on the map). Our next steps are to evaluate the quality of the collected data, further improve the App and then carry out two more field surveys. These will collect reference points for Wayanad and Sindhurdurg districts, in Kerala and Maharashtra states respectively, that have also been hit hard by KFD.

The MonkeyFeverRisk project is supported by the Global Challenges Research Fund and funded by the MRC, AHRC, BBSRC, ESRC and NERC [grant number MR/P024335/1].