An unsettled and wet period since late September followed by persistent heavy rainfall in late October and early November has caused severe flooding across northern and central England.

Our hydrologists have provided the following background information, based on provisional data provided by the Environment Agency and the Met Office, and ongoing flood research carried out at the Centre for Ecology & Hydrology.

The summer and autumn so far (June-September 2019) have been exceptionally wet in northern, central and eastern England, resulting in widespread and severe flooding. In the summer, localised but severe flooding occurred in Lincolnshire in June and in the western Peak District and Yorkshire Dales from late July to early August, as reported in our monthly Hydrological Summaries. In October, the jet stream adopted an anomalous southern track propelling a series of cyclonic systems across the UK. The prolonged and persistent rainfall contributed to substantial rainfall totals in many regions and, in conjunction with saturated soils, many catchments were susceptible to flooding. Notable rainfall on 7th November prompted exceptionally high river flows in central and northern England, with a number of catchments in South Yorkshire, Derbyshire and Nottinghamshire recording their highest ever peak flows. There has been flooding of properties and significant disruption to transport.

Here, we present some preliminary analysis of the November flooding, in terms of rainfall and river flows, and briefly consider the impacts. We also discuss the question of the role of climate change in extreme floods such as these.

On 7th November, an occluded front remained largely stationary across central England for around 24 hours, bringing persistent heavy rainfall. At Gringley-on-the-Hill (Nottinghamshire), 63.2mm fell in the 24-hour period from 03:00 on the 7th. This 24-hour total equates to 122% of the typical rainfall for November as a whole (based on the 1981-2010 long-term average).

Over the same time period, a raingauge near Doncaster recorded 77.8mm. Using the FEH13 rainfall frequency model (Stewart et al, 2013) we estimate that this observation has a return period of more than 60 years at this particular location. This means the chances of rainfall again at this level or higher on one day, in any given year, is just 1.6%.

At another raingauge in Sheffield, 82.2mm was recorded. This has an estimated return period of more than 40 years, and therefore a 2.5% chance of the 24-hour rainfall total being larger than 82.2mm at this location in future years.

The highest ever recorded 24-hour rainfall total in the UK remains at 341.4mm. This was recorded on 5th December 2015 at Honister Pass in the Lake District. This rainfall event had a calculated return period of around 1,000 years, meaning the probability of a repeat occurrence is incredibly slim (0.1%).

November (so far) follows a succession of wet months. In our October 2019 Hydrological Summary we reported that October concluded an exceptionally wet summer and autumn so far (June‑October) in northern, central and eastern England, with many parts receiving more than twice the average rainfall for this period. For the Severn-Trent region (covering a large area of central England), it was the wettest June-October on record (in a series from 1910). These wet conditions in early autumn meant that soils in these areas were already saturated at the start of November, reducing their capacity to store rainfall, therefore increasing runoff and exacerbating flooding.

The exceptional rainfall described above generated new record river levels and flows for many catchments around the Peak District. We do not yet have access to all of the processed river flow data to confirm how widespread new record flows are, but have obtained data for a selection in consultation with the Environment Agency (Table 1). The map below is taken from the UK Water Resources Portal and shows the hydrological situation in England on 7th November 2019, with a large part of central and northern areas reporting exceptionally high river flows. 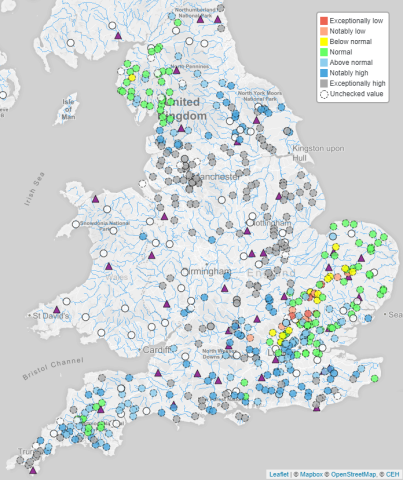 Due to the inherent difficulties of river flow measurement during flood conditions, the data used in Table 1 below are provisional and estimates may be revised by the Environment Agency after quality control procedures have been completed. To provide a rapid, broad-scale assessment of event severity, we have computed provisional return period estimates using the standard Flood Estimation Handbook (FEH) enhanced single site method (Table 1). These initial estimates will undoubtedly be superseded by more comprehensive, locally-informed assessments of event severity when available (such work is currently already underway within the Environment Agency).

Table 1: Peak flows and calculated return periods for selected gauging stations. The data used here are provisional and may be revised by the Environment Agency:

While not comprehensive, the following gives an overview of the wide range of flooding impacts based on early assessments.

Six Severe Flood Warnings — the most serious warning category issued by the Environment Agency — were issued on the River Don on 8 November (meaning there was an imminent threat to life) and these remained in force until the following week. Alongside these warnings, more than 150 Flood Warnings and Alerts were issued across central England.

Following 7th November, widespread flooding occurred across central England, with Fishlake, Doncaster and Worksop among some of the worst hit areas. Initial estimates indicate that ~1000 properties were flooded, with thousands more households evacuated. The Armed Forces were mobilised to assist with distribution of sandbags and large-scale pumping operations which continued for several days afterwards. Although many properties have been flooded, the Environment Agency reported that more than 22,000 properties had been protected by flood defence schemes and warnings.

Travel by road was disrupted with major routes closed and people stranded in Meadowhall shopping centre (Sheffield) overnight as waters in the River Don rose, isolating the area. There were also significant disruptions to rail services lasting several days as lines were flooded or blocked by landslides preventing travel on most routes around Sheffield, Derby and Nottingham.

Was the flooding event due to climate change?

The UK has experienced a number of nationally-significant flooding events in recent years. Some of the areas of central England that have suffered flooding in November 2019 were also subject to devastating flooding in summer 2007. There is inevitably speculation that floods are becoming more severe as a result of climate change.

One way to investigate this is to look at long records of rainfall and river flow. There is mounting evidence (Met Office & CEH, 2014) for an increase in heavy rainfall in the UK over the last 40 years or so, but increases in rainfall do not necessarily equate to equivalent increases in flooding. To investigate changes in flooding, long-term records of peak river flows are needed. A significant body of research has used the data held on the National River Flow Archive to assess trends in flooding in the UK. This work is in Hannaford, 2015 and the LWEC climate change report card, while more-up-to-date flow and rainfall trend analyses have also been published by CEH scientists (Prosdocimi et al, 2014, Harrigan et al, 2018).

Time series plots showing trends in annual peak flows for the Don and Derwent are shown below using data up to 2016/2017. The Don shows a weak upward trend, but despite the dominance of the 2007 event, the trend is not statistically significant. However, the longer record from the river Derwent shows that there were a number of major floods in the pre-1960 period that were larger than the 2007 flood (which the 2019 peak exceeded). In fact this record shows a weak downward trend, albeit with the single-most prominent feature of the graph being notable variability between years and decades, with more ‘flood-rich’ periods in the 2000s contrasting with ‘flood-poor’ periods such as the early 1970s. 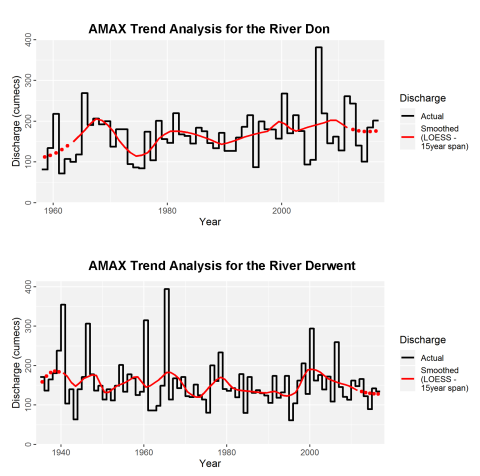 In general, most work on flood trends observes that the north and the west of the UK have seen an increase in high river flows since the early 1960s. This has been associated with changes in atmospheric circulation patterns, in particular, the North Atlantic Oscillation (NAO). This oscillation affects the position of storm tracks across the UK and has a strong influence on rainfall. More generally, in collaboration with an international team (Hodgkins et al, 2017) we have highlighted the role of ‘interdecadal’ variability in Atlantic sea-surface temperatures (the Atlantic Multidecadal Oscillation, AMO). This is important through the year and across the UK (as opposed to the NAO which has greatest influence in winter in the north-west) and has been associated with the run of wetter summers in the late 2000s/early 2010s, including the summer 2007 floods.

Research in the UK using very long records (like the Derwent record above) points to pronounced variability between decades, leading to ‘flood rich’ and ‘flood poor’ periods driven by the NAO, AMO and other factors. We don’t yet know how much the prevalence of recent floods is down to anthropogenic warming and how much is down to these patterns of variability. Human-induced warming will also influence these modes of ocean-atmosphere variability, so it is hard to disentangle these drivers to attribute any event or cluster of events to anthropogenic climate change using observational records alone.

When it comes to the question of attribution to climate change, we need to combine our observational analyses with sophisticated climate and hydrological modelling techniques. Following the widespread flooding in 2013/2014 with our partners we showed that this event was more likely to have occurred because of human influence on the climate (Schaller et al, 2014, Kay et al, 2018). Other researchers have linked the winter 2015/2016 floods to human-induced warming using similar techniques (Otto et al, 2018).

It will no doubt take time for an attribution to be published for this flood event. But what we can say with some certainty is that there has been an increasing trend in flooding over the last four or five decades in parts of northern Britain and this is at least consistent with what we may expect in a warming world.

There are also a host of other potential factors that may contribute towards flooding in any catchment, based on catchment/land management practices, but their role in these as in other major flood events is not clear at present, and will no doubt be investigated further. However, while such factors can play a significant role in influencing the magnitude of peak levels or flows, their importance is secondary to the role of exceptional rainfall in the case of major flood events such as these.

The CEH team will be investigating further and more information will be provided in the November 2019 Hydrological Summary, which is due to be published on 13th December.

We wish to thank the Environment Agency and the Met Office for their support in providing data at short notice, especially while responding to the ongoing flooding.