Saltmarsh ecosystems are widely distributed around the globe and are the focus of much research due to their importance to wildlife, people and the functions they perform. They are under threat, however, as centuries of over-exploitation, habitat modification and pollution have led to their degradation and biodiversity losses.

Salt marshes are important habitats for many rare and unusual species of plants and animal adapted to living in an environment that is regularly covered by tides. They are frequently grazed by livestock, either for premium quality meat or for conservation purposes. Salt marshes buffer the erosive effects of wave energy and protect the land behind from flooding, in addition to being a source and sink of carbon. CEH saltmarsh research covers the following themes:

Our research on saltmarsh management focuses on livestock grazing and the effects on plants and animals. We cover breeding birds, small mammals, invertebrates and plants.

Around half of British redshank breed on salt marshes, making the habitat nationally and internationally important for the species. However, working with our project partners (RSPB and Natural England) our studies have shown there has been a 53% decline in nesting redshank pairs between 1983 and 2011. Declines are associated with predation from animals including gulls, crows, foxes and stoats. With changes in global weather patterns and the increased frequency of storm events, nests of salt marsh breeding birds are subjected to an increased likelihood of flooding. Changes in agricultural practise has also meant that grazing intensity has changed over time leading to changes in the structure of the saltmarsh vegetation which redshank need to build their nests in. Our work has shown that trampling of redshank nests by cattle increases from 16% at 0.15 cattle per hectare to 98% at 0.82 cattle per hectare.

Our work doesn’t suggest that grazing should be stopped to prevent cattle trampling the nests. Saltmarsh grazing is needed to provide a mixture of vegetation heights and the tussocks that provide cover for the birds to lay their eggs and hide from predators. However, changes in cattle stocking rates or changes in the times when cattle are put on to the marsh may be appropriate.

Despite salt marshes being covered by the tide our research has shown that the upper parts of salt marshes can hold significant populations of shrews, voles and mice. They prefer the ungrazed parts of the saltmarsh which gives them cover from predators such as birds of prey and foxes. There is also a plentiful food supply with abundant small invertebrates and vegetation.

An abundant and diverse range of invertebrates live in salt marshes, many of which are adapted to living with the constantly changing environment. Saltmarsh conservation management often involves livestock grazing to maximise plant diversity and provide suitable breeding habitat for over-wintering coastal birds. The effect of grazing on invertebrates is rarely studied however. In a study where we sampled over 90,000 invertebrates we found that different groups of beetles and spiders  show distinct preferences for either grazed or ungrazed vegetation.

A greater variety of beetle species were found on ungrazed saltmarsh. Spiders that hunt by running over vegetation or catch their prey by building large webs were also found more frequently in tall, ungrazed vegetation. ‘Money spiders’ that build tiny sheet webs were more numerous on the short vegetation of the grazed marsh, along with inter-tidal coastal specialists. Our work has shown that a variety of vegetation heights within a saltmarsh helps to maintain a variety of habitats for invertebrates. 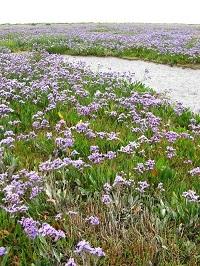 As well as providing important habitats for animal species, saltmarshes also support rare plant species and communities. There are two saltmarsh habitats listed in Annex I of the Habitats Directive (H1420 Mediterranean and thermo-Atlantic halophilous scrubs and H1320 Spartina swards, Spartinion maritimae) reflecting their importance for nature conservation. Many salt marshes are constrained in their extent by the construction of sea defences, making upper marsh and transitional plant communities rare. Our work for Natural England provides an inventory and description of Annex I saltmarsh habitats and transitional vegetation in England in order to update future reporting on conservation status. The report helps improve understanding of the underpinning processes which can be used in design to improve the potential for recreating these elements of saltmarshes as part of intertidal restoration schemes.

CEH has a long association with Spartina research. Spartina alterniflora is a perennial grass native to salt marshes of the eastern seaboard of North America. In about 1820 it was unintentionally introduced onto mudflats on the River Itchen, from where it spread throughout Southampton Water. In some areas, S. alterniflora grew beside Spartina maritima, a plant of Old World saltmarshes, which is now extinct in Southampton Water. Fertilisation of S. alterniflora by S. maritima pollen produced a sterile species now named Spartina x townsendii. Further genetic modification produced Spartina anglica, a fertile species that spread naturally along the south coast of England and the north coast of France by seed and by rhizome fragments. It was also deliberately introduced to saltmarshes throughout the British Isles and world-wide to reclaim land and for coastal defence. S. anglica has greatly altered the ecology of many intertidal areas, although it is debatable whether it is a ‘friend or foe’ of nature conservation.

In addition to economic and nature conservation relevance, S. anglica has immense scientific importance. Because the species formed so recently, and because both its parental species are still in existence, it provides a superb opportunity to study the ecological and genetic consequences of natural hybridisation and so understand one of the key processes driving plant evolution. We have remapped the distribution of the population at Marchwood is the last remnant of the S. alterniflora material involved in the origin of S. anglica, providing a unique resource to evolutionary biologists. 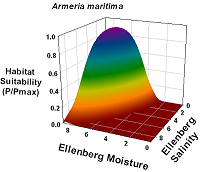 CEH has a long history of coastal research and we hold extensive datasets on a plant species and their associated soil characteristics. Salinity, along with other environmental variables constrains the distribution of coastal plants in predictable ways. Our modelling work quantifies these relationships to create niche models for 132 coastal plant taxa in found in Great Britain based on eight environmental variables. The models can be applied to predict changes to habitats and ecosystem services that that plant species provide and responses to changing sea levels.

Our research investigates biogeochemical processes in salt marshes and how they are effected by management and restoration. We work on carbon cycling, microbial processing and greenhouse gas emissions from saltmarsh soils.

Natural wetlands, including salt marshes, can help offset climate change by storing carbon in their soils. At the same time wetland soils respire methane, carbon dioxide and nitrous oxide which are all major greenhouse gases. It was thought that because salt marshes are frequently covered by the tide, the salt in the sea water would reduce the activity of methane producing bacteria and the decomposition of organic matter and therefore the production of greenhouse gases, and methane in particular. Our research into the effects of cattle grazing on greenhouse gas emissions shows that British salt marshes do emit methane from their soils and that grazing does make a difference with grazed marsh producing greater volumes.

Coastal margin habitats are globally important their capacity to capture carbon for the air and store it in their soils. Salt marshes have the ability to capture carbon at a rapid rate and store for long periods of time. The relative carbon storage potential of coastal habitats is now considered to play a significant role in the regulation of both local and global climate. Our work with our partners at Plymouth Marine Laboratory has shown that if coastal habitats are maintained at their current extent, their carbon capture capacity over the period 2000 - 2060 is valued to be in the region of £1 billion UK sterling. However, if current trends of habitat loss continue, the capacity of the coastal habitats both to capture and store carbon will be significantly reduced, with a reduction in value of around £0.25 billion UK sterling.

Due to high productivity and high sedimentation rates, salt marshes are extremely efficient at capturing and storing carbon, and provide the ideal environment for enhancing carbon capture rates through the management of livestock grazing, a common use of salt marshes. However, salt marshes are subject to a range of environmental stressors, which can vary considerably over a large spatial scale. It is therefore important to understand the implications of environmental and contextual variability on the use of livestock grazing as a carbon management tool. 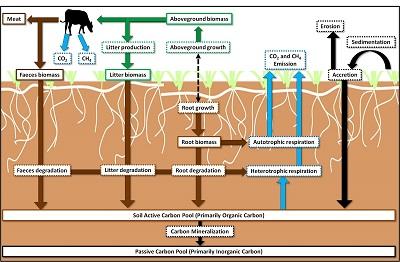 Our studies of grazing effects on salt marshes across the west coast of the UK have found that grazing has an impact on several above ground characteristics, but no impact on soil carbon stocks or overall carbon capture rates.  Instead, below ground processes were explained more by the broader environmental variables and seasonal changes. Our work does not discount the fact that grazing may affect soil carbon stocks on the small-scale, or after initial introduction, but shows that grazing impacts are insignificant next to broader contextual factors on marshes with well-established grazing regimes. 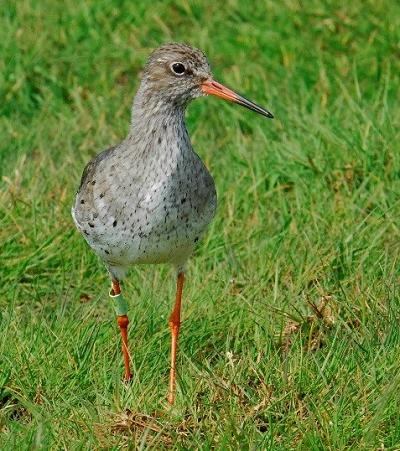