A new study led by the UK Centre for Ecology & Hydrology (UKCEH) and the Met Office shows there was less than a 10 per cent chance that large-scale fires seen in the Amazon in 2019 were caused by weather conditions. This finding suggests the sudden increase in the level of burning was very likely linked to deforestation.

By the end of August 2019, there were more than 40,000 fires burning in the Amazon – the highest in the region for nine years. Over the course of the year, fires produced around 400 million tonnes of carbon emissions (80 per cent up on 2018) and destroyed around 900,000 hectares of rainforest (an area larger than the island of Corsica). Millions of people were exposed to increased air pollution, including in São Paulo, 1,700 miles away.

While this prompted global speculation that deforestation was to blame, fire activity is common in the region between June and September each year, and is often a complex balance of direct human ignition and weather conditions. Until now, there has been no significant research into the role, if any, of meteorological conditions in the increased level of burning during 2019.

Using scientific modelling, including analysis of fires in previous years, researchers at UKCEH and the Met Office investigated what total burnt area would normally be expected, given rainfall patterns and soil moisture levels at the time. They say weather in 2019 was not unusual, and found there was just a seven per cent chance that meteorological conditions triggered the increase in fires in the main deforested areas of the Amazon between June and August.

“Our conclusion is that human activity – landscape changes or fires started to clear forest – caused the increased level of burning and not the weather,” says Dr Doug Kelley of UKCEH, who led the research. 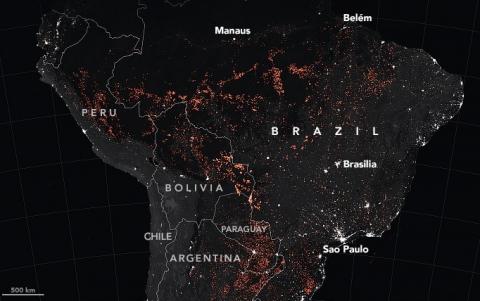 The researchers’ modelling supports observations from satellite imagery. These showed the burnt area in the Amazon in 2019 was larger in regions where there was already substantial deforestation. Other studies have shown the spike in fires also coincided with a surge in recorded rates of deforestation =, which takes place primarily for cattle ranching and crop production.

Dr Kelley says living trees hold water, and this can suppress the spread of wild fires, even in drought periods. However, in deforested areas, felled wood and vegetation may be drier, acting as fuel for a fire.

The Amazon is crucial to regulating the world’s climate as it absorbs large amounts of carbon dioxide (CO2) from the atmosphere. However, being a significant store of carbon, this may be re-released as CO2 during deforestation and burning.

The scientists say deforestation creates a series of vicious cycles. It reduces the Amazon’s ability to store carbon and absorb CO2 while also increasing the risk of wildfires, which emit greenhouse gases and damage plant life that would otherwise retain carbon and remove CO2 from the atmosphere. While the Amazon ecosystem ‘takes care of itself’ by recycling its own water, deforestation will reduce its ability to do this, and make the rainforest less stable.

Met Office climate scientist Dr Chantelle Burton, a co-author of the study, says: “It is important to be able to understand what is driving changes in fire trends, especially in globally important carbon sinks such as the Amazon. This could help inform decision making around land management practices to minimise unintended impacts – both on short timescales and for future responses to climate change.”

The study, funded by the Natural Environment Research Council, has been published in the journal Biogeosciences. The authors say the next step in their research is to disentangle the different human activities and estimate the impact that landscape changes and deliberately-started fires have, individually, in the spread of Amazon wildfires. They will also use their modelling tool (ConFire) to investigate factors behind the spread of wildfires in Australia and Siberia. 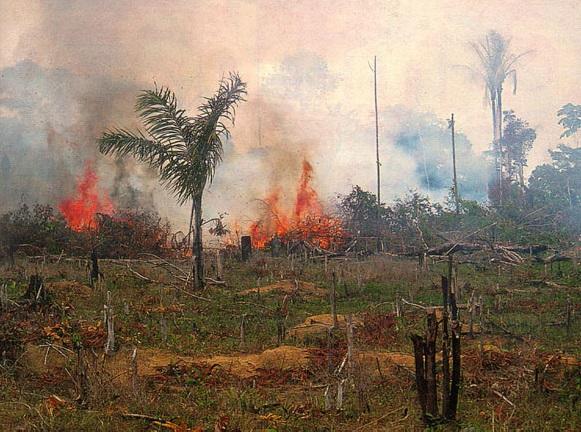 Fire activity is common in the Amazon between June and September each year    Picture: NASA