In a new paper in Environmental Research Letters, led by Hui Yang of Peking University, China – and on which CEH is a co-author – we analysed simultaneous meteorological measurements and river flow (i.e. runoff) amounts for a set of large catchments across the globe.

Understanding what controls river flows, and how these might change in to the future, remains a key requirement placed on environmental modellers. To say the obvious, river runoff constitutes a renewable fresh water resource for humans and animals. We need to understand how we account for runoff in earth system models. How does rainfall pass through large catchments and into rivers? Can we describe this in a simple way? How will this change in to the future, with both climate change and different pressures that might raise water usage? 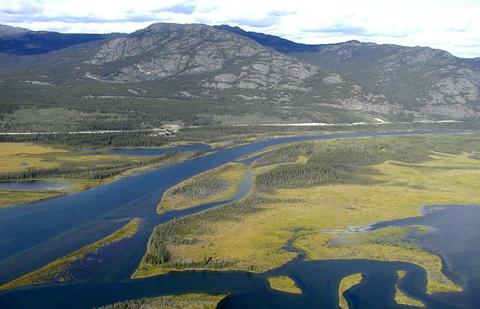 Pictured: The Yukon river basin is one of 33 major catchments from around the world included in the study

Here we describe our paper findings in a little more detail, and use the opportunity to explain some of the technical aspects. We do our analysis using a relatively old but well-established mathematical model, called the Budyko formulation. Central to this model is a parameter within it called the “retention parameter”, and traditionally given the symbol n. This catchment-specific quantity in the Budyko equation helps describe the amount of rainfall that goes in to river flows, rather than returned to the atmosphere by evaporation.

By comparing simultaneous meteorological measurements and runoff datasets for large catchments, we find evidence that water retention in them has changed for many rivers in recent decades. Such changes are occurring in addition to climate change, as that signal is within the meteorological drivers.

For many rivers the alteration in retention is large. This implies that other factors, such as dams, widespread irrigation, vegetation changes (e.g. altered plant types, or any adjusted root access to water) and general water abstraction can adjust river flows. This can be as much as any forcing by climate change, occurring through alteration of temperature and rainfall levels. The overarching message of our analysis is that climate change cannot be considered in isolation to more direct human impacts when projecting water availability.

"The overarching message of our analysis is that climate change cannot be considered in isolation to more direct human impacts when projecting water availability."

Analyzing climate models into the future shows that further changes to river flows can be expected in the decades ahead. Picking apart signals from these climate models, the Budyko framework allows us to separate expected future runoff changes in to three components. These are due to the alteration of annual rainfall, due to temperature increases adding to evaporation, and again as a consequence of retention changes. Although these climate models do not in general have irrigation and dams explicitly modelled in their land surface schemes, some drivers of retention changes are still identified. These include alteration of vegetation extent (“greenness” levels alter under climate change), plant water use efficiency for higher carbon dioxide concentrations, and expected changes to rainfall intensity.

Aside from providing understanding of catchment systems, our analysis also raises some interesting aspects of how best to describe processes. Mirroring how many physical problems were investigated before the massive availability of computer power, the early mathematical modelling of the environmental system also concentrated on relatively simple explanatory systems of equations. The Budyko formulation is a good example of this. Such equations are parameterised with a small number of “bulk” parameters, describing average behaviours over large geographical areas and timescales. However, while the parameters have a strong intuitive basis and thus very helpful, their values are unknown. Computer power now allows the solution of full sets of partial differential equations in climate models, often at very high spatial and temporal resolutions. This often leads to the argument that simple models are redundant, given calculations at fine resolution.

But something is lost by ignoring the simpler intuitive and descriptive summary parameters. Our analysis creates an interesting compromise, by retaining the simple Budyko model, yet using much more advanced climate models (and their land surface schemes) to help determine possible changes in its single retention parameter, n.