The science we do is hugely important in protecting our local areas and their ecology and communities, but often people living in and around these areas have little awareness of the work we do, the impacts it has, or how they can become involved.

With this in mind, a team of us at the Centre for Ecology & Hydrology (CEH) and Lancaster Environment Centre (LEC) set out on a mission to try and address this, and what better way to encourage people of the importance of science to their local areas than a science-themed nature trail?

It was thus that, on a drizzly day at the beginning of June this year, we hosted our first ever interactive science discovery trail on the western shores of Windermere.

The trail started from the Harrowslack car park, just a few hundred metres from the landing for the ferry from Bowness-on-Windermere. We welcomed people and told them a bit about the day, before sending them on their way around the trail.

The route itself was about 2 km long, following accessible paths along the lake shore. Signs guided visitors between different science stations along the route, and there was an optional woodland trail back to the start.

The wealth and diversity of research that CEH and LEC do meant we had no difficulty in finding science topics to focus on or scientists to help build activities and demonstrations based on these topics. We selected four different topics - flood mitigation, sustainable energy, soil erosion and algal blooms - each of which had relevance to the route we had chosen.

First up, visitors learnt about research into preventing flooding using natural methods, such as plating trees, courtesy of a station led by Dr Nick Chappell from LEC. The team in charge of the station demonstrated various pieces of scientific equipment, such as a ring permeameter setup to measure water infiltration beneath trees, a key benefit of natural flood mitigation methods.

Bioenergy was the theme of the next station, led by Dr Rebecca Rowe from CEH. Here, visitors could try and complete a jigsaw puzzle to learn how different bioenergy sources can be used to generate energy to power and heat our homes.

A short walk along the lake shore was an opportunity for people to get their hands dirty, courtesy of our soil erosion station, led by Dr Jessica Adams from CEH. The team here demonstrated how vegetation can affect soil erosion. Visitors were invited to make their own soil erosion bottles with differing levels of vegetation, and compare the colour of water after it "rained" (courtesy of a watering can). 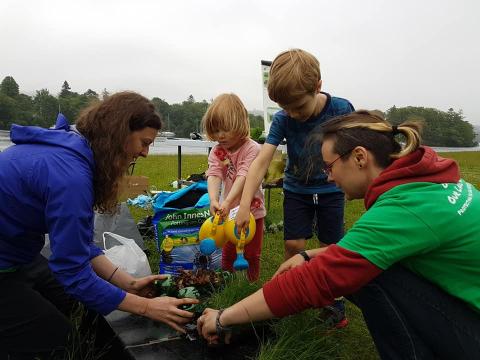 The scorching summer we had this year has prompted a spate of interest in the subject of the next station: algal blooms. Blue-green algae, which can pose a health risk to those who come into contact with it; loves hot and dry conditions. At this station, led by Jessica Richardson from CEH, visitors were shown how to correctly identify algal blooms, and how they can help us by reporting sightings using our Bloomin' Algae app.

We were really pleased with how the day went, and we got some great positive feedback. The activities and demonstrations enthused and excited both children and adults, and we had some brilliantly engaging conservations with adults about our science and how it helps protect our local areas. We aspired to increase knowledge and enthusiasm about crucial scientific topics, and we are confident that we achieved this aim.

Despite it being a drizzly and cold day after a half-term holiday of almost wall-to-wall sunshine, and even though the Bowness-on-Windermere ferry was out of action due to a ferry fire the preceding week, we still engaged around 100 people during the day.

There was a buzz of excitement about the event on social media as well, particularly on Twitter, where the hashtag #LakesScienceWalk kept people updated on what was happening in the run up and on the day.

Come to #Windermere & find us to talk about soil erosion #lakessciencewalk & do your own soil experiment! pic.twitter.com/9yoVvs1RNz

Looking to the future

The event was always planned as a trial run and we learnt a lot from the day that will help us in making future events even better, such as improved, targeted advertising.

One of the great things about the event is that it could easily be taken to different venues, or we could use individual stations as part of other events. Morecambe Promenade and Williamson Park in Lancaster have both been suggested as potential locations.

If you have any suggestions, we would love to hear from you, so please do not hesitate to get in touch!

Thanks to everyone involved in organising and running the event. It took a considerable amount of effort, which would not have been possible without such an enthusiastic and dedicated team behind the project.

Watch this space for news about future events!