Soils have dried considerably during June and at the end of the month soil moisture is low across the UK so that some locations vegetation will be under stress. With little rainfall forecast, this situation is likely to worsen in the coming weeks.

There is some variability in soil moisture because of local factors such as soil type and recent rainfall.

Provisional data for June indicates that rainfall was below normal across the UK, ranging from slightly below normal in parts of Scotland, to exceptionally low in south-east England. The rain that did fall was in the first few days on the month and then in the period June 13-19.

June was generally hot and sunny especially in the last 10 days of the month during which maximum temperatures approached 30C at many COSMOS-UK sites. Associated with the high temperatures were high rates of evaporation and therefore rapid falls in soil moisture.

As soils dry, vegetation can struggle to access the water required to grow and can become stressed leading to wilting from which it may not recover. The point at which wilting starts is dependent not only on soil moisture but also characteristics of the vegetation, particularly rooting depth.

Some shallow-rooted vegetation in some locations is now experiencing stress, but this stress will extend to deeper-rooted vegetation and to more parts of the UK as the period of no, or low, rainfall continues. 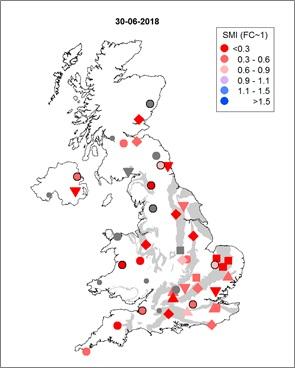