On Saturday 6th July the Meadows Park in Edinburgh city centre was transformed into a festival village for thousands of people, hosting guest speakers, live music, storytelling, and all manner of activities for both adults and children. These included upcycling workshops, clothing repairs, bike rides and even yoga classes, plus a bit of science!

This climate-themed event was the perfect opportunity to showcase CEH’s expertise in carbon cycling, storage and transport. Our poster display featured work on carbon storage and emissions from Scottish peatlands, taken from the Land Use, Land Use Change and Forestry (LULUCF) sector of the National Greenhouse Gas Inventory and produced by CEH scientists. 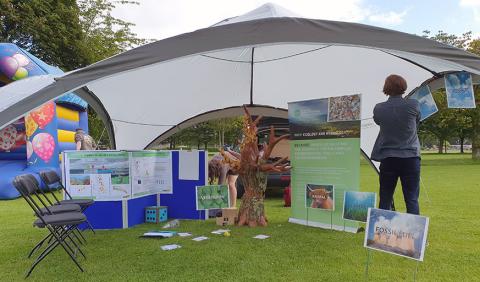 Peatlands are a particular area of interest for Scotland. As well as flood storage and other services, they are crucial for storing carbon, helping to mitigate climate change. We presented a summary of results from two NERC-funded national capability programmes, LOCATE and UK-SCAPE, which tell us about the movement of carbon from land through freshwater systems to the sea. Our research highlights the need to understand why carbon losses from land are increasing and how this is affecting our lakes, rivers and coastal waters.

A family friendly event also meant the chance to get out the oversized dice and play the fun Carbon Game. In this activity players act as carbon atoms in the carbon cycle; moving through different environmental carbon reservoirs and hoping to stay out of the atmosphere for as long as possible. If you appear three times as CO2 in the atmosphere, it’s game over!

Our luck held out and it was a sunny day in Edinburgh. The weather and the bouncy castle just next door helped to ensure a steady stream of visitors to our stall and our Carbon Game leaderboard soon filled up. The game seemed to draw out children’s competitive side, with some playing six or seven times to try and beat their personal best. 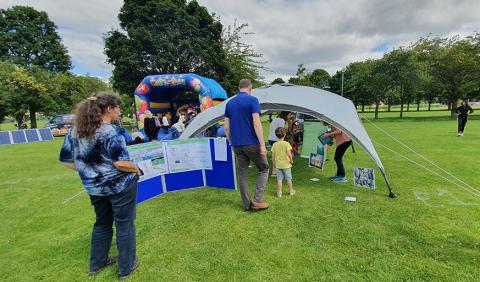 By playing the game we helped to introduce some of our visitors (of all ages) to the carbon cycle and what happens to carbon in the environment. Our presence at the festival certainly introduced many people to the work CEH does, and perhaps caught the attention of a future generation of scientists.

It’s fair to say the Edinburgh Climate Festival was a huge success, attracting people of all backgrounds, creating a sense of community spirit and, ultimately, increasing public engagement in environmental issues. Returning for only its second year, the Climate Festival was attended by almost 8000 people, certainly a powerful demonstration of public concern for our environment. They can’t all have been there for the bouncy castle!

Thank you to everyone who visited our stand at #edinburghclimatefestival  We hope you enjoyed learning more about carbon and the atmosphere. Find out more about our atmospheric research here: https://t.co/e5RXn9L4J9 pic.twitter.com/NDixMsdgPL

Many thanks to ELREC for organising the event, to the team of volunteers who worked throughout the day to make things run smoothly and, of course, thanks to all those who came to visit us at our stall. We hope to see you again next year!