A new mobile phone app enables farmers to monitor the success of wildlife habitats they have created on their land, by using artificial intelligence to rapidly identify plants from thousands of possible species.

E-Surveyor which is being launched today (8 June 2022), is the latest addition to a suite of free digital tools developed by the UK Centre for Ecology & Hydrology (UKCEH) to guide farmers and other land managers when they are implementing agri-environment options.

The app automatically recognises plant species in photographs uploaded by the user, allowing them to check what has successfully grown from what they have sown, such as wildflowers to support pollinators or seed mixes for winter bird food. It also provides information about which pollinators and other beneficial insects are typically supported by each plant, and assesses the quality of a habitat.

The launch of E-Surveyor comes at a time when agricultural subsidies from the UK national governments are increasingly focused on sustainable farming, including the new Environmental Land Management schemes (ELMs) in England.

Professor Richard Pywell of UKCEH says: “Farmers are experts in understanding how well their crops and livestock are doing, but it is harder to assess the performance of a seed mix for wildlife. E-Surveyor enables them to easily assess the quality of wildlife habitats on their farm and learn more about the biodiversity that these habitats support.”

E-Surveyor calculates the most likely species of plant in a photograph, as well as suggesting possible alternatives. A trial over several months, which involved farmers and land managers testing a prototype app in the field and providing feedback, proved the app’s ability to recognise plants accurately and consistently.

E-Surveyor can be used to identify a single flower or identify all the plants found in a habitat. One feature of the GPS-enabled app allows farmers to undertake a structured survey of a habitat patch by walking a route and stopping a set number of times to identify the plant species present.

The app can then assess how well the sown wildlife habitat – anything from lowland calcareous grassland to upland hay meadows – is performing compared to national standards for these habitats. This information will inform management actions to improve the quality of wildlife habitats, such as increasing how often wildflower margins are cut in the establishment phase to control undesirable weed species.

UKCEH computational ecologist Dr Tom August, who led the development of the app, says: “E-Surveyor has been designed with and for farmers. The app has been rigorously tested by them in the field, so we are confident that it can automatically, rapidly and accurately identify plants.”

E-Surveyor is available to download for Android and Apple devices. More details, as well as a video introduction to using the app, are available at ceh.ac.uk/e-surveyor

UKCEH researchers draw upon the latest scientific data and cutting-edge technology to produce free, user-friendly digital tools that help farmers develop sustainable agricultural systems. E-Surveyor was among the tools developed as part of the ASSIST programme*.

The launch of E-Surveyor coincides with Cereals 2022, and UKCEH scientists will be at the arable event in Cambridgeshire (Stand number 134) to talk to farmers about the digital tools and UKCEH’s pioneering research supporting sustainable farming practices.

Farmers can also contact Dr August to provide feedback and suggestions on additional features for E-Surveyor via email at tomaug@ceh.ac.uk

*A free suite of digital tools to support farmers’ decision making were developed by UKCEH as part of the six-year £12 million ASSIST sustainable farming research programme, which came to an end in March 2022. This was led by UKCEH, Rothamsted Research and the British Geological Survey. ASSIST was funded by the Natural Environment Research Council and the Biotechnology & Biological Sciences Research Council, and by the Defra/JNCC Natural Capital and Ecosystem Assessment project.

In addition to E-Surveyor, other tools produced by UKCEH include:
•    E-Planner, a web-based tool that helps farmers plan where to put environmental options on their farm
•    a soil moisture app that shows how wet or dry the ground is relative to historical extremes
•    the web-based Scenario Exploration Tool which explores the impacts of potential changes in the way we use the UK countryside for farming.
•    E-Viewer, a virtual reality experience that allows farmers and others to explore what different future farming landscapes might look like. 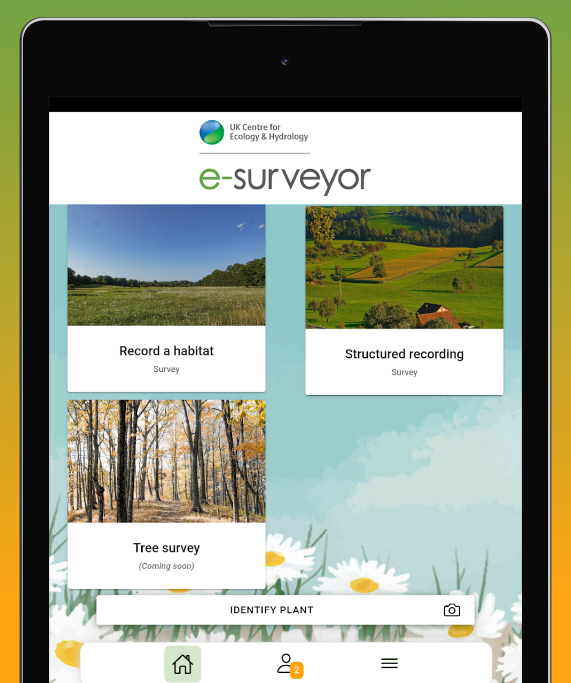