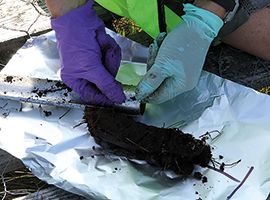 As society expands and develops, the demands to deliver more from our soils grows. This intensification, and the threat of over-exploitation, can degrade or lead to the loss of soil through a range of processes including erosion and chemical contamination.

Soil is more than an inert blanket: its associated biological communities, from microbes to forests, play important functional roles in regulating water flows and recycling wastes to deliver clean water and a healthy environment. Soils also underpin many of our business sectors from agriculture and food production to construction, insurance and health.

The UK holds some of the most comprehensive and extensive data sets on soil of any nation. The UK Soil Observatory unlocks their scientific and economic value.

The UK Soil Observatory is a 'big data' initiative. By making soils information widely accessible, UKSO has the potential to advance scientific understanding and inform business for a sustainable and environmentally friendly future.

CEH is a partner in UKSO. Data includes ourCountryside Survey Topsoil maps for Great Britain. The maps show a series of thematic soil-properties including pH, Bulk density, Carbon, Nitrogen, Phosphorus, and biodiversity based on topsoil data taken at 15cm depth during the Countryside Surveys of 1978, 1998 and 2007.

Information from the mySoil app, developed by CEH and the British Geological Survey, is also included.

A free smartphone app for iPhone, iPad and Android devices, mySoil is a joint initiative from the British Geological Survey and the Centre for Ecology & Hydrology. mySoil allows people to view and upload information about soils in their area.