The current project is looking to map the wintering distribution of European shags that breed on the east coast of Scotland and England by collating reports of colour-ringed birds over the winter months. The aim is to be able to answer a range of questions including whether mates and offspring winter together, whether the birds return to the same wintering location year after year, and what effect the choice of location has on their subsequent survival and breeding success.

The shag breeding season can extend from March to October, but little is known about the ecology and distribution of birds when they leave the colony.

Adults and chicks have been colour-ringed at colonies in Shetland, Orkney, Stroma, East Caithness, North Sutor, Bullers of Buchan, Isle of May and the Farne Islands. Over the winter, reports of colour-ringed birds have shown us that some individuals migrate several hundred kilometres up or down the east coast, while others do not leave the breeding colony at all. This type of variation in winter location is known as 'partial migration'.

The highest mortality rates occur during the winter, especially in young birds that are less efficient at foraging. An improved knowledge of winter ecology is therefore particularly important, not only for understanding the population dynamics of a species, but also in order to be able to plan effective conservation measures. Poor conditions over the winter can also have a knock-on effect on the timing of breeding and subsequent success, and even future survival.

The European shag (Phalacrocorax aristotelis) is a large black seabird, similar to a cormorant. They breed and roost on cliffs and rocky coastal outcrops, feeding on small benthic fish such as sandeels. Shags are impressive divers, reaching down to 60m in depth for up to a minute at a time. However, they have wettable plumage that requires drying between dives, thought to be the cause of the classic “wings out” pose.

The Isle of May

The Isle of May Long-Term Study (IMLOTS) is a key component of the CEH monitoring network for seabirds. The European shag is one of six intensively studied species breeding on the island, with more than 90% of all breeding adults and offspring shags ringed each year with field-readable “darvic rings”. Colour ringing allows the study to identify individuals within and between years, recording breeding success, mate pairing and survival.

Below: time-lapse video showing European shag nesting site on the Isle of May

We are always looking for reports of colour-ringed shags from any coastal location across the east of Scotland and England.

Birds have a large colour ring on one leg with a three-lettercode, and a metal ring on the other. Codes are read downwards, and we need the location, date, code and background colour of the ring for every sighting. Please keep a look out for rings on any birds seen across the east coast of Scotland and England, and send all sightings to shags@ceh.ac.uk. 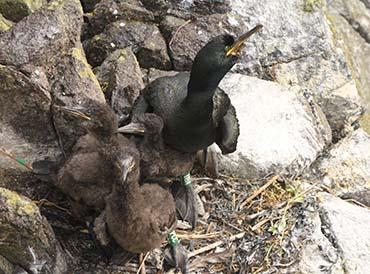 European shag and chick on a nest, Isle of May (Photo: Gwyn Rees)