We use the Conwy catchment, North Wales (~500 km2) as a long-term, large-scale platform for catchment scale research, modelling and environmental trend detection. The catchment has a wide range of landscapes, facilitating comparative survey and experimental work. We study ecological, biogeochemical and hydrological processes from the gene to landscape scale with an emphasis on developing a holistic understanding of how pressures influence our natural resources and the many benefits which we receive from them. We have accumulated an extensive suite of consistent baseline data which are available to other research projects having more specific aims and objectives.

The Conwy catchment provides a linked terrestrial, freshwater and marine study system at a practical, policy relevant scale, with a wide range of ongoing experimental research, long-term monitoring and modelling activities. The diversity of habitat types and broad range of economic activities provides an ideal platform on which to undertake research into a range of environmental issues including: flooding; water quality; soil health; climate change mitigation; improving biodiversity; development of more resilient land and water-based industries such as farming, forestry and tourism and exploring how these interact at a landscape. 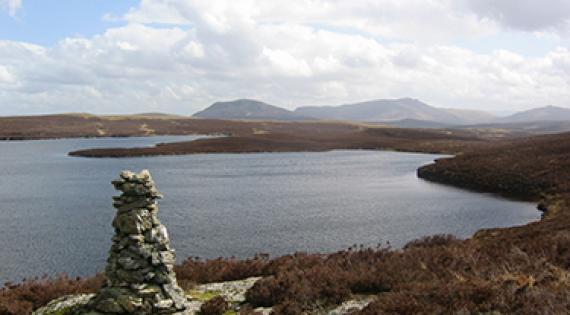 The main Conwy river drains an area of 380 km2 to the tidal limit, with a further 200 km2 of land draining directly to the 20km long estuary. There is a strong climatic gradient across the catchment with annual precipitation varying between 500mm in the north-east to more than 3500mm falling in the mountains of Snowdonia to the west, which rose to 1064m. The lower and drier east of the catchment is more agriculturally productive, with livestock rearing and scattered native woodland. The higher Snowdonia mountains support limited grazing, plantation forestry and are of high amenity value. Of particular interest is the Migneint, a 200km2 Special Area of Conservation in the catchment headwaters. It is one of the largest areas of blanket bog in Wales and is a major store of carbon. The proportions of major soil classes are close to the Welsh national average, and typical of UK upland areas. Soils are generally neutral to acid, reflecting the geology, which includes no major calcareous outcrops.

The catchment has a range of important habitats: blanket bog; montane and moorland habitats; conifer plantations and woodlands; extensive and intensive grassland; lakes and drinking reservoirs; flood plains and salt marshes. Its uniqueness arises from this wide range of habitats which are a result of a complex mix of geology, soils and historic land use. There is a broad range of engaged stakeholders in the catchment including: water industries (drinking and hydropower); shell fisheries; farmers; foresters; tourist industries; conservation groups and engaged local communities.

The Environmental Information Data Centre (EIDC) is a NERC data centre hosted by CEH. The EIDC contains nationally important terrestrial and freshwater datasets. Data collected in the Conwy catchment from a variety of projects (past and ongoing) are stored in the EIDC, and include:

The Conwy catchment is being used as hydrological and ecological modelling platform, with current research strands being:

Watch a short video about CEH's work on long-term research platforms including the Conwy Catchment.

To discuss opportunities to develop future research and collaborations with CEH in the Conwy, please email David Cooper.