The UK Centre for Ecology & Hydrology (UKCEH) has produced an updated Land Cover Map for the UK landscape, based on high-resolution satellite imagery.

The Land Cover Map 2021, the ninth in the time series, depicts broad habitats including grasslands, arable, water, woodlands, urban and suburban across the length and breadth of the country. Each pixel represents a 10-metre square of land, which means one can identify narrow features of the landscape such as hedgerows or smaller waterways.

The Land Cover Maps are now produced by UKCEH annually. The maps provide essential information for government agencies, water companies, land managers, NGOs and researchers about the state of the British landscape, locally or nationally, and how it is changing. Knowing what habitats there are, and where, is crucial for planning developments and environmental improvements.

Data from the Land Cover Map 2021 show that, out of the 21 different broad habitats, 'improved grassland’ covers the largest overall geographical area. This habitat, which is land intensively managed for farming, covers around 27 per cent of the UK’s total land surface, while the second highest, arable, covers around 20 per cent.

The 10m raster map exploits the maximum resolution available from the Sentinel-2 satellites operated by the European Space Agency. There is also a vector map depicting land parcels with a minimum size of 0.5 hectares, and derived from this a 25m raster map.

The UKCEH Land Cover Maps are developed through the UK-SCAPE programme, thanks to National Capability funding from the Natural Environment Research Council, part of UK Research and Innovation. To download datasets from the Land Cover Map series, see the Environmental Information Data Centre website. 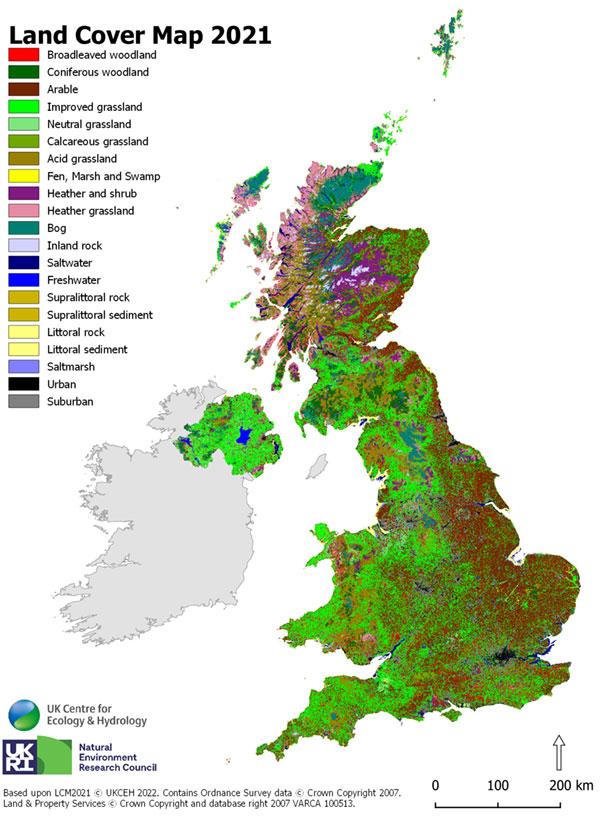