June 2018 Hydrological Summary for the UK

June 2018 was a hot and dry month. For England and Wales, it was the only June in series from 1910 to rank among both the three hottest and three driest Junes. Under the influence of persistent high pressure, it was the hottest June on record for both Wales and Northern Ireland (in series from 1910), and the fourth driest June in a series from 1766 in the CRU England & Wales Precipitation series. Correspondingly, late June soil moisture deficits (SMDs) were the highest on record for the UK (in a series from 1961) and the highest for any month since August 1995.

Mean river flows for June were below normal or lower across most of the north and west, notably in north-east Scotland, north‑west and south‑west England, and south Wales. Daily flows in some of these areas and Northern Ireland began to eclipse daily minima towards month‑end. Groundwater levels fell but generally remained in the normal range or above due to the delayed end to the recharge season.

Many reservoirs in the north and west fell by 10-15%, and by more than 20% at Clatworthy. Overall stocks in Northern Ireland and Wales fell by 12%, and were more than 10% below average in Wales and parts of northern England. The continuation of blocking high pressure and little appreciable rainfall during the first half of July across the UK is likely to have exacerbated agricultural and environmental stress.

"Though forecasts are uncertain, the timing and magnitude of rainfall over the next six weeks will be influential on the prospects for UK water resources into late summer and autumn." 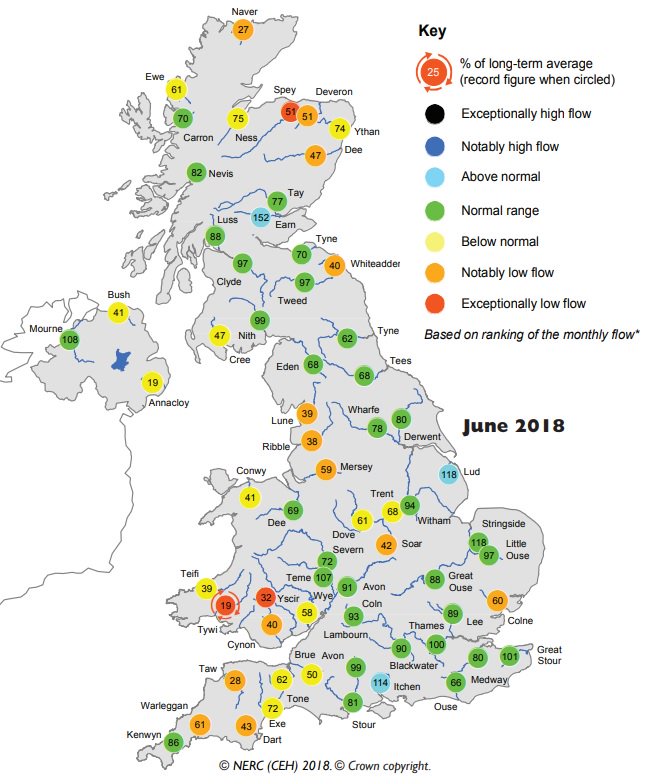 The monthly summary is a look back at hydrological events occurring in June 2018. Latest information on flood warnings is provided by the Environment Agency, Natural Resources Wales and Scottish Environment Protection Agency (flood warnings for Northern Ireland are not available).