Hui Yang and Chris Huntingford comment on a brief communication paper published this week, in the journal Natural Hazards and Earth Systems Sciences.

In our new paper we use available climate models to examine whether the chances of occurrence of the severe East Africa drought of autumn 2016 may have risen due to human-induced climate change. We also look to see if we can expect more similar droughts in to the future. 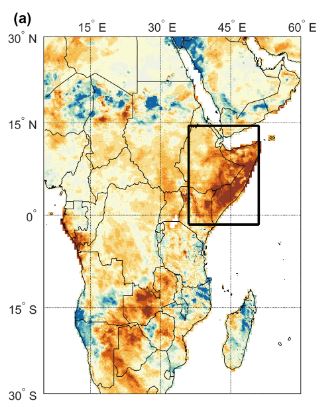 Each available climate model is “normalised” so that it matches known measured features of autumn East Africa rainfall. Our headline finding is that in general, we find no overall evidence that humans may have triggered, or increased the chances of the year 2016 low rainfall. For the future, there is a slightly raised chance of severe drought in any year.

Our results do illustrate differences between individual climate models. They also depend on the rainfall datasets used to normalise the climate models, and also how that is achieved. That is, we find a dependence on “nudging” climate model outputs to have similar averages to rainfall data, or instead additionally nudging to have identical inter-annual variability for the recent past.

The research was led by Hui Yang from Peking University, Beijing, and carried out whilst she was based, working with Chris Huntingford, at CEH for twelve months in 2017. Hui Yang’s visit to the UK was funded by the China Scholarship Council.

Corresponding author Hui Yang said, “Our work is very much a show-and-tell of model projections of autumn rainfall for East Africa. This is for the current range of climate models, as used to guide the UN Intergovernmental Panel on Climate Change (IPCC) reports.”

Chris Huntingford said, “Most climate models predict wetter years on average. However a few do the opposite. In additional, some wetter models estimate more future variability, and so although these estimate wetter conditions in general, the risk of very dry years also increases.”

We certainly don’t intend our work to be the definitive answer as to risk of East Africa drought. But we hope it will provide a strong incentive by the scientific community to continue its on-going activity in trying to reduce differences between climate models.

Chris Huntingford also said, “Parameterising climate models to generate accurate estimates of extreme events is tough. Extremes, by definition, are rare and so there is less data to verify climate model performance at generating the tails of statistical distributions. However this research does have to be undertaken. Knowledge of any changes to extreme weather event frequency, including under climate change, is critical to aid societal planning.”