Nick Everard, a senior hydrometric scientist at the UK Centre for Ecology & Hydrology, explains that an innovative project is investigating how very high-resolution videos shot from space could transform flood management globally...

River flow is one of the most important and yet challenging hydrological variables to measure accurately. Traditionally, this has required significant resources of people, equipment and infrastructure, all present onsite. In times of flooding, accurate river flow measurements are critically important, but can be particularly difficult and potentially extremely hazardous to obtain.

Furthermore, in an age where the importance of water and the risks it poses have never been greater, many monitoring networks around the world are inadequate, declining, or falling into disrepair.

FluViSat (Fluvial Video from Satellite) is a one-year research project funded by the European Space Agency (ESA) and led by the UK Centre for Ecology & Hydrology (UKCEH) in collaboration with partners at Queensland Government in Australia and Luxembourg-based flood mapping specialists RSS Hydro. It has the potential to enable the accurate determination of flow rates in medium and large rivers anywhere on the planet, with no requirement for people or equipment to be on site, or even on the same continent!

The FluViSat concept combines several significant advances that distinguish it from many other satellite-based streamflow and flood mapping projects:

Key to achieving these three advances is the collaboration with commercial high-resolution satellite imagery provider, Planet Labs. Its 21-strong SkySat constellation has the potential to collect still or video imagery for any part of the Earth up to seven times a day, with pixel sizes as small as 0.5 metres.

The basic principles are simple: the speed of visible features on the water’s surface are tracked using computer algorithms, to provide a map of water speed for the full width of the river.

As any hydrologist knows, however, you cannot tell the total discharge of a river simply by looking at the speed of the water’s surface. You also need two other key pieces of information: first, the width and depth of the river channel and, second, the average speed of the water throughout the channel at that location. This information can be obtained before or after the FluViSat observation, from site surveys and remote sensing datasets.

An early discovery in the project was the extent to which the area of interest would wander around in the field of view of the satellite video. This is perhaps unsurprising to anyone who has used a camera or phone with a zoom lens, since the satellite imager is some 450km above the earth and has a focal length of 3.6 metres! A second challenge was ‘morphing’ of the scene due to the changing viewpoint as the satellite passes overhead at 27,000 km/h. Both these challenges were addressed by RSS-Hydro, which specialises in flood mapping via satellite images, in order to enable processing for water speed calculations.

To test the accuracy of the FluViSat method, a number of validation sites were chosen in the UK, Australia and Europe. At these sites, comparison measurements were made using videos obtained with a low-cost, consumer grade drone, and with data obtained with acoustic river flow sensors. These observations were timed to synchronize with the satellites capturing imagery overhead, although issues with cloud cover meant this was not always possible.

Since the FluViSat method requires trackable surface features large enough to be seen from space, validation activities were targeted at high flow situations. In Australia, several storms in the wet season provided high flows in the Burdekin and Herbert Rivers, leading to our intrepid Queensland Government project partner Mark Randall battling through hundreds of kilometres of flooded dirt roads in order to synchronise his measurements with the satellite whizzing overhead.

In the UK and Europe, low flow conditions affecting many areas required some adjustments to the validation activities and led to the inclusion of the Zambezi River in the Victoria Falls gorges on the Zambia/Zimbabwe border, where large flows and clear skies were almost guaranteed.

A validation site where high flows could be predicted was the Falls of Lora in the Highlands of Scotland. Here, twice a day, the tide pushes millions of litres of water in and out of the sea-loch Loch Etive through a small constriction under a road bridge. The enormous flow of water rushing through such a small channel generates a huge plume of very fast-flowing white-water, extending up to half a kilometre, and easily large enough to be seen by the SkySat satellites’ cameras.

But does it work?

Full details will be published soon but in the meantime we can say that results are very encouraging. The satellite-derived results compare very well with reference values obtained with acoustic river flow sensors and aerial drones, and in all cases it is possible to clearly see a sensible distribution of water velocities across the surface of the water.

The project team is currently investigating options to refine the workflow and further improve results and is actively exploring potential applications ranging from remote monitoring of major rivers to extreme event emergency response, and impact assessments for the reinsurance sector.

In response to the terrible flood situation affecting Pakistan in early September, a video was requested for a location on the Indus River. This video, collected on a cloud-free day, has allowed the calculation of water speed at several locations. Even without information on river cross-section and vertical velocity profiles, this information illustrates the magnitude and strength of flows in the river.

Further videos have been requested in order to assess the potential for near-real-time monitoring of increases and decreases in flow rate.

The project team acknowledges the generous support of the European Space Agency (ESA) in funding this research, and of Planet Labs PBC in supplying the imagery. The project has also enjoyed the support of the World Meteorological Organization’s ‘HydroHub’ initiative, which aims to advance methods for making hydrological observations around the world. 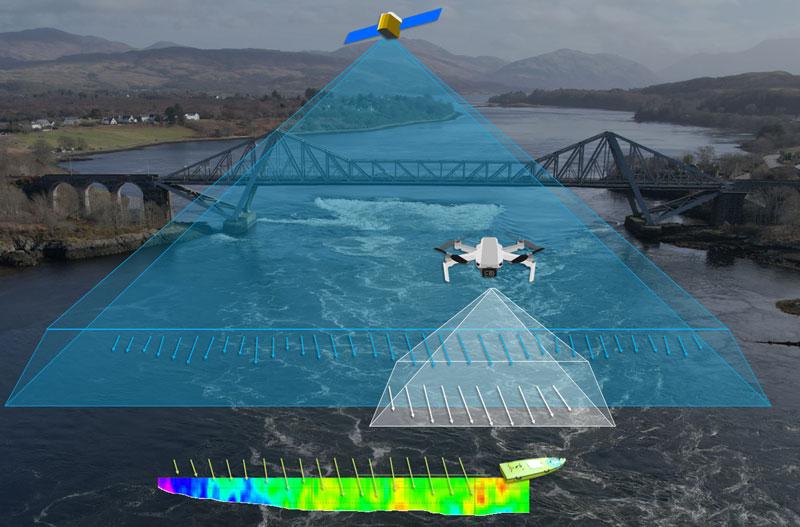 The FluViSat concept combines several significant advances that distinguish it from many other satellite-based streamflow and flood mapping projects.