Our freshwaters are impacted by many types of stressors from nutrient pollution and bankside modifications to water scarcity, floods and climate change, resulting in about 60% of Europe’s lakes and rivers being unacceptably degraded. Here, UKCEH authors Laurence Carvalho, Bryan Spears and Stephen Thackeray discuss a new study that unpicks the effects of these multiple stressors with important implications for the management of European lakes and rivers.

Rivers and lakes are among our most loved ecosystems. They are hotspots of biodiversity in the landscape and support recreation and eco-tourism. Yet, sadly they are under increasing and diverse stress as a result of human activity. They are used as conduits for domestic and industrial waste, straightened and reinforced to meet water storage and supply demands, and cut off from floodplains to support food production. They are also extremely sensitive to the effects of climate change.

As a result, they are experiencing the most rapid biodiversity losses of all ecosystems, globally.

Our ability to manage these ‘multiple stressors’ is hampered, however, as we know little about how they interact with one another. This is especially important as we seek climate change mitigation options. Is it possible that by relieving one stressor we could make the effects of another worse? 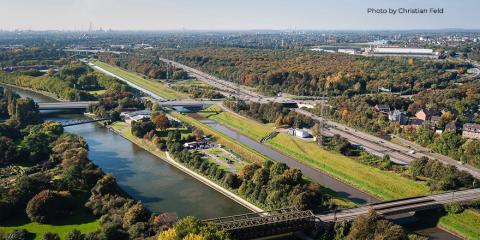 Image: Ruhr Metropolitan area in Germany, one of the study sites. Photo by Christian Feld, University of Duisberg-Essen, Germany

What did we do?

Laurence explains: "We addressed this question using data from experiments and field campaigns producing the first pan-European study of its kind. We reveal that interactions between stressors occurred in about one third of 174 case studies suggesting that the control of a single stressor, in these cases, would result in an ‘ecological surprise’.

“We examined the response of freshwater biodiversity (plants, algae, fish and invertebrates) to different stressor combinations across these case studies, using data from 33 experiments in lake tanks and river flumes, 14 large river basins and 22 regional and Europe-wide studies. Data from UKCEH’s long-term lake monitoring from Loch Leven, Windermere and Esthwaite Water were part of the study." 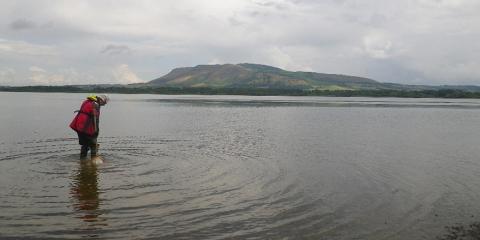 Bryan continues: “Having long-term data of this kind is vital for our understanding of how interactions vary in time and with management. For example, in Loch Leven, as nutrient concentrations have fallen over recent decades following nutrient management, we are now seeing a growing influence of extreme weather events, associated with climate change, on lake ecology. More stringent nutrient reduction may be one way to ‘off-set’ these changes.

The studies focused on the effects of nutrient pollution (as a widespread primary stressor in freshwaters globally) in combination with the effects of warming, hydrological stress (scarcity or high rainfall events), channel straightening and toxic pollution.

Bryan: “We designed a novel statistical approach and worked with our colleagues across Europe to apply it to their data. The test allowed us to identify if one stressor had a dominant effect over the other, whether stressors acted additively, or whether there were interactions that were either synergistic (greater than additive effect) or antagonistic (less than additive effect). We applied this approach to all paired stressor studies for a pan-European synthesis across lakes and rivers."

Stephen explains: “Our experimental facility at Lancaster consists of multiple little lakes, with full food webs built on communities from Windermere. This allows us to control stressors independently of one another and examine the effects these changes have on plants and animals. 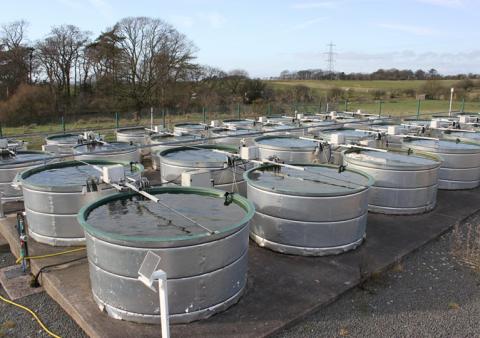 “Our work in this system has uncovered novel ecological responses to interactions between warming, flushing rate and nutrients that have wide-reaching implications for lake management across the world. In this study, we combined these results with those from other experiments and field studies to provide the most comprehensive synthesis of such interactions globally.”

What did we find?

The synthesis of the studies showed that in 39% of cases only one of the two stressors had a dominant effect, 28% showed additive effects and 33% showed significant interaction effects (antagonistic or synergistic effects) of the two stressors on the biological response.

What does this mean?

Laurence: “Our results vindicate the traditional focus of lake restoration and management on reducing nutrient stress, while highlighting that river management requires more bespoke management solutions. However, it is also possible that as nutrient concentrations decline in lakes so interactions with other stressors, including those associated with climate change, will become more important, as we are witnessing in Loch Leven.

“Some ‘ecological surprises’ were observed in some of the experiments, such as antagonistic effects of nutrients with lake browning (increasing humic content) and some synergistic interactions, such as climate warming exacerbating nutrient effects on algae. These results have wide-reaching implications as their effects on ecosystems extend beyond Europe: browning of freshwaters is a phenomenon reported especially across boreal and sub-arctic regions, while climate change extends globally.”

Bryan: “Our study provides a broad understanding of the complexity of how changes in land-use, landscape modification, water availability and climate change may impact on freshwater biodiversity. It provides guidance on the identification of potentially interacting stressors to improve the efficacy of wide-scale costly management programmes.”

"Our study provides a broad understanding of the complexity of how changes in land-use, landscape modification, water availability and climate change may impact on freshwater biodiversity."
Dr Bryan Spears, UKCEH

We also asked the study’s lead author, Sebastian Birk, University of Duisburg-Essen, to comment on the importance of the work. Sebastian said: “Our study confirms that there are still too many nutrients in lakes, coming mainly from agriculture and domestic wastewater. Currently, nutrients are affecting lakes even more than rising temperatures or water scarcity.

"In the case of rivers, however, it is often possible to see how the two pressures interact. If two of them – such as rising temperatures and wastewater – have an effect, both must be reduced, otherwise sustainable water protection is not possible.

"Often, 1+1=3. The actual effect of two stressors is greater than their sum. In these cases, the extent of restoration measures necessary to improve ecology will be easily misjudged."

Funding: This work was supported by the MARS project (Managing Aquatic ecosystems and water Resources under multiple Stress) funded under the 7th EU Framework Programme, Theme 6 (Environment including Climate Change), Contract No: 603378.

25% co-funding was provided by partner organisations through their institutional budgets.