Harmful algal blooms in lakes are becoming an increasing problem globally. Here, Jessica Richardson, a PhD student with the Centre for Ecology & Hydrology and the University of Stirling, discusses a study she led into the role of climate change in creating these blooms...

‘WARNING – Blue Green Algae Present in Water’. These signs are now a common sight along freshwater shores worldwide. While algal blooms have been documented for centuries, over recent decades they have become more common and more intense. The impacts of blooms include fish kills, dog deaths, higher water treatment costs and loss of recreational access. This growing threat to water security makes it important to understand the drivers of harmful algal blooms.

What has caused this boom in blooms?  The increase in Blue-green algae, also known as cyanobacteria, is very much a human-caused problem, with the main cause being nutrient over-enrichment in freshwaters through pollution from sewage and agriculture. Animal and human waste plus chemical fertilisers contain nutrients – mainly nitrogen and phosphorus – which get into water courses due to run-off from crop fields and the discharge of sewage. These nutrients increase the growth of algal blooms, which reduce the amount of oxygen in water, causing the death of fish.

There is also increasing interest in the role of climate change, in particular global warming, as higher temperatures help stimulate the growth of many harmful bloom-forming algae. It is expected that nutrient enrichment and higher temperatures together will combine to enhance blue-green algal blooms synergistically, in other words the interaction of the elements results in a greater effect than the simple sum of the parts. So one plus one is greater than two.

But climate change is not just about global warming. Changes in weather patterns are also resulting in increases in extreme rainfall events which could have a positive effect, by reducing blooms through flushing algae out of our lakes and reservoirs.

What did we study?

We ran an experiment at the Centre for Ecology & Hydrology’s large aquatic mesocosm facility in Lancaster, which is set up to simulate shallow lake environments. It consists of 32 large tanks, each containing 3,000 litres of lake water, sediment, plants, invertebrates and stickleback fish.

We wanted to consider the potential effects that environmental changes could have on populations of blue-green algae in order to understand if their combined effects would be as predicted or if ecological surprises occurred.

The experiment tested the combined effects of warming, nutrient enrichment and extreme rainfall events on the abundance of blue-green algae. 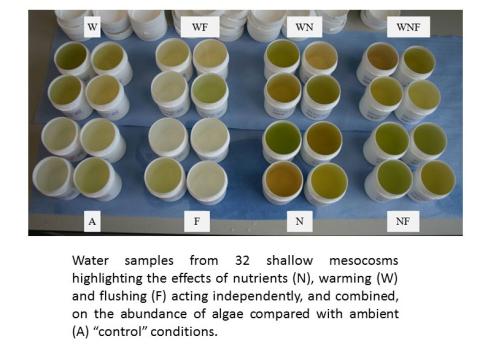 For each environmental stressor we had two different levels to simulate current versus the future predicted state of freshwaters:

Each level of each stressor was considered in isolation, as well as in combination, to make eight treatments in total, each repeated four times.

Before the experiment, our hypotheses were that:

The results supported the first hypothesis; blue-green algae increased in the heated tanks with a particular increase in the harmful bloom‐forming species.

Flushing resulted in loss of blue green algae, though recovery from these events was not influenced by heating and nutrient enrichment but by the time of year that the flushing event occurred; algae were slower to recover in the winter when other important growth factors were limiting, such as light and temperature.

Video: Extreme flushing events were simulated by pumping in 1500 litres of water (half the volume of the mesocosms). The water was pumped into the middle of the mesocosms so as not to disturb the sediment. Water was lost by flowing over the top of the mesocosms. The water used for flushing was sourced from a local reservoir and was low in nutrient and algae – any nutrients that were lost through flushing were replaced so that we only explored the effects of loss of algae.

The most surprising result was that instead of a positive, synergistic interaction between heating and nutrient enrichment, there was a negative interaction resulting in less abundant blue-green algae than expected (ie, one plus one was less than two).  This unexpected response contrasts with widely hypothesised and observed interactions elsewhere and is possibly a result of carbon depletion within the enriched and heated mesocosms. However the combined effect still resulted in high levels of blue-green algae and exceeded World Health Organisation thresholds for drinking and bathing waters.

What does this mean?

This study builds a foundation for understanding the complexity of how climate change may impact on freshwater resources globally. It highlights the clear need to mitigate against global warming, but indicates that ecological surprises may occur depending on the type of lake and combination of stress (eg, low or high nutrient loading).

Oversimplification of global change effects on blue-green algae should be avoided, and the lake context and seasonal effects should be considered as important factors shaping the response. Future studies should test other real‐world possibilities, including more extreme droughts, which are likely to lead to higher abundance of blue-green algae due to there being less rain to flush them away.

Bloomin’ Algae is a Citizen Science smartphone app developed by the Centre for Ecology & Hydrology for reporting the presence of harmful blooms of blue-green algae. 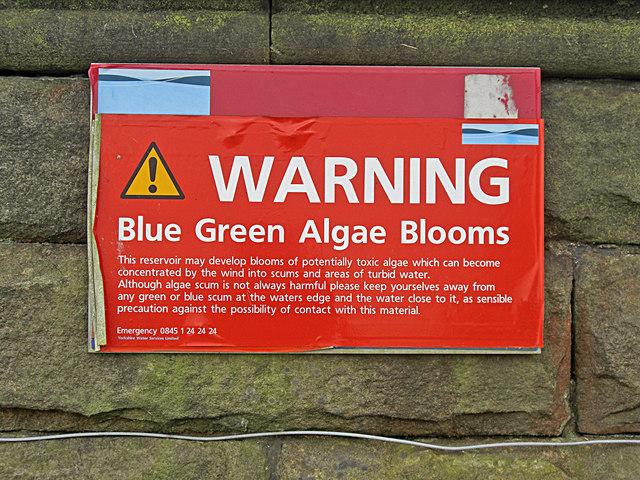