Alice Horton, an ecotoxicologist at the Centre for Ecology & Hydrology, looks at the context and potential implications of a proposed EU-wide ban on primary microplastics...

Once released into the environment, microplastics are practically impossible to remove. They will remain there for hundreds, if not thousands of years. A wide range of animals, including invertebrates, fish, mammals and birds will ingest plastics, either directly or indirectly by eating other organisms that have consumed them.

In light of the current evidence, the European Chemicals Agency (ECHA) has recently announced plans to introduce a ban on intentionally added microplastics (also called ‘primary microplastics’) in products sold within the EU.

There are already a number of countries that have introduced bans on microbeads in wash-off cosmetic products, including the UK in 2018. And whilst the ECHA’s proposed ban builds on these, it is much more comprehensive, covering a wide range of products – from detergents and controlled-release fertilisers, to leave-on cosmetics and paints. However, that said, it does only tackle part of the problem.

At the Centre for Ecology & Hydrology (CEH) we have found fibres in the gut of freshwater fish, which shows they are ingesting microplastics – tiny particles less than 5mm in size - from the River Thames. As microplastics pass up the food chain and are prevalent throughout the environment, it is known that humans are exposed to them, either through our diet or the air we breathe. However, the health implications are, as yet, unclear.

Above: A study in Environment Pollution was the first to show microplastic ingestion within freshwater fish in the UK

There’s no doubt the ECHA’s proposed ban would have significant implications for the industries that manufacture these products, as well as the consumers who use them. The challenge for industries will be identifying suitable alternative ingredients and maintaining the product’s performance despite the removal or alteration of microplastics from the formulation. This, and the potential alternative additives, will, of course, need to be carefully considered by manufacturers to ensure the effectiveness of their products is maintained and that environmental risks are kept to a minimum.

Despite the ambitious and extensive nature of the ECHA’s proposal, it must be noted that this ban will only tackle the directly manageable part of the issue of microplastics in the environment.

The majority of microplastics found in the environment are not those manufactured as primary microplastics and intentionally added to products. They are ‘secondary microplastics’ i.e. derived from the breakdown of larger plastic items such as litter and synthetic fabrics. This has been shown in our studies at CEH, which have found fibres, fragments and films derived from textiles and road runoff within UK river sediments and fish.

The majority of microplastics found in the environment are not those manufactured as primary microplastics and intentionally added to products. They are ‘secondary microplastics’... our studies at CEH have found fibres, fragments and films derived from textiles and road runoff within UK river sediments and fish." Alice Horton

Furthermore, in order to understand the environmental and ecological implications of microplastics, it is essential to investigate any effects in the context of real environmental conditions. For example:

The latter question is one we are also addressing with our research at CEH, determining how microplastics may affect the toxicity and bioavailability of chemicals such as pesticides or flame retardants to freshwater invertebrates.

Finally, understanding the sources of microplastics to the environment is imperative if industries and policymakers want to implement mitigation strategies. This is especially relevant to terrestrial and freshwater environments, where the majority of (micro)plastics are used and thus where most microplastics (most primary and secondary) are released to the environment.

To this end, we are currently undertaking a project funded by UK Water Industry Research (UKWIR) to investigate the presence and characteristics of microplastics within treated and untreated wastewater and drinking water. The results of this project will provide valuable and novel data, and will guide the UK Water industry’s response to the issue of microplastics. However further research of this sort is vital to inform evidence-based decision-making into the future. 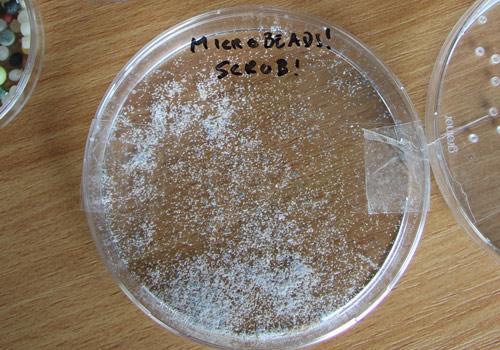