** Sign-ups have now closed for the Summer Soilstice citizen science project. Thanks to everyone for the interest shown in taking part. **

Hot on the heels of a citizen science project that had hundreds of people placing air samplers on their window sills, Jenny Shelton, a PhD student with the Centre for Ecology & Hydrology (CEH) and Imperial College, has sought help again as part of her research into monitoring fungicide drug resistance. Her new survey is dubbed #SummerSoilstice and asks volunteers to send in soil or compost samples taken from their gardens on the Summer Solstice (June 21).

Jenny’s supervisors, Andrew Singer of CEH and Mat Fisher of Imperial College, explain why the science is so important:

The new survey is a follow-on from Jenny’s #ScienceSolstice project, which looked for azole-resistant Aspergillus fumigatus in samples of air collected from the homes and workplaces of citizen scientists on solstice and equinox days during 2018-19. A fumigatus is a ubiquitous fungal species commonly found in soil due to its important role as a decomposer but which is also linked to a disease called aspergillosis or ‘fungal asthma’.

The spores pose no risk to most people as they are cleared by our bodies’ immune system, but some individuals suffer debilitating allergic responses caused by hypersensitisation to the inhaled spores.

If spores are not cleared they can germinate in the lung where the growing fungus secretes toxins and triggers an immune response, leading to symptoms such as weight loss, chronic cough and breathlessness, and resulting in a diagnosis of aspergillosis. In individuals with a compromised immune response- such as those with HIV/AIDS or cystic fibrosis or undergoing organ transplant or chemotherapy- spores may enter the bloodstream via the lungs and disseminate through the body, resulting in a life-threatening illness called invasive aspergillosis (IA).

Aspergillosis and IA are treated with drugs containing azole compounds but infections are much harder to treat if caused by azole-resistant Aspergillus fumigatus spores. As the structure of the azole compounds used in medical drugs are similar to azoles used in fungicide sprays in agriculture and horticulture, it is possible that spores are acquiring resistance in the environment prior to being inhaled as well as in the lung as a result of long-term treatment.

Participation from across the UK

The idea behind the citizen science projects is to get wide participation from across the UK in order to determine the background levels of azole-resistant A. fumigatus spores in air and soil and therefore get an idea of the exposure of people to these spores as we go about our daily routines.

For this phase, we’re asking volunteers to send in soil/compost samples from their gardens so that Jenny can culture spores from A. fumigatus and then test them for fungicide resistance. As with the air sampling, knowing the location and timing of each sample will allow Jenny to look for clusters of resistance and any associations with land use, soil type, urban versus rural location and seasonality, which could identify potential drivers of resistance and potential hotspots for the drug-resistant fungus.

"...knowing the location and timing of each sample will allow Jenny to look for clusters of resistance and any associations with land use, soil type, urban versus rural location and seasonality..."

We know that industrial composters constitute a 'hotspot' for A. fumigatus growth because the heat generated in the centre of the waste piles during the composting process kills most bacteria and fungi but allows the thermophilic (heat-loving) A. fumigatus to thrive.

These facilities accept organic waste from households, restaurants and shops and also from plant nurseries, landscaping companies and farms, from which the plant matter may have been exposed to azole-containing fungicides during its lifetime. An important early stage of the composting process is digestion of the organic matter by microbes that require oxygen. The waste piles are rotated to allow for the circulation of air, thereby mixing the contents and exposing more to azole residues from the commercial and agricultural waste. This practice makes it more likely that A. fumigatus proliferating in the centre of the piles is exposed to azoles during its growth, which might cause it to develop resistance.

It's possible that the compost heaps we keep in our gardens act in a similar manner but on a smaller scale, and that the azole residues that drive resistance are coming from the plants and bulbs we have planted in our garden that have already been sprayed with or dipped in azoles at some point during their lifetime. Many industrial composters supply compost to farms and garden centres so it’s also possible that the bags of compost we use in our gardens already contain azole-resistant A. fumigatus spores as a result of the composting process.

Jenny would like as many citizen scientists as possible to take part in the project, but it’s important to recognise that compost and compost heaps potentially contain high numbers of A. fumigatus that may be aerosolised as a result of disturbing the bag or heap (read more). Due to this, please do not participate in sample collection from these locations if you suffer from aspergillosis, have a lung condition (chronic or acute, such as ‘flu) or are immunosuppressed, all of which places you at greater risk of contracting aspergillosis from inhaling a large number of spores.

How you can take part

Sign-ups for the sampling packs have now closed. Thanks to the hundreds of you who have volunteered to take part, and apologies to those of you unable to apply.

The sampling pack will contain two clear plastic sachets, a wooden spatula, a poster, simple instructions and a questionnaire and will arrive prior to Friday 21 June (summer solstice 2019).

All you need to do is collect two soil samples from your garden – either from a compost heap, bag of compost or manure, pot, planter or border – and return them in the freepost envelope along with a completed questionnaire.

Jenny will process the soil samples in the lab and culture from them any A. fumigatus spores present, which she will then test for resistance to tebuconazole (the third most-sprayed azole in agricultural fungicides here in the UK). Those of you who indicate you are happy to receive updates will later receive an email with a link to a Google map showing anonymised locations of the samples and how many spores were present in each. 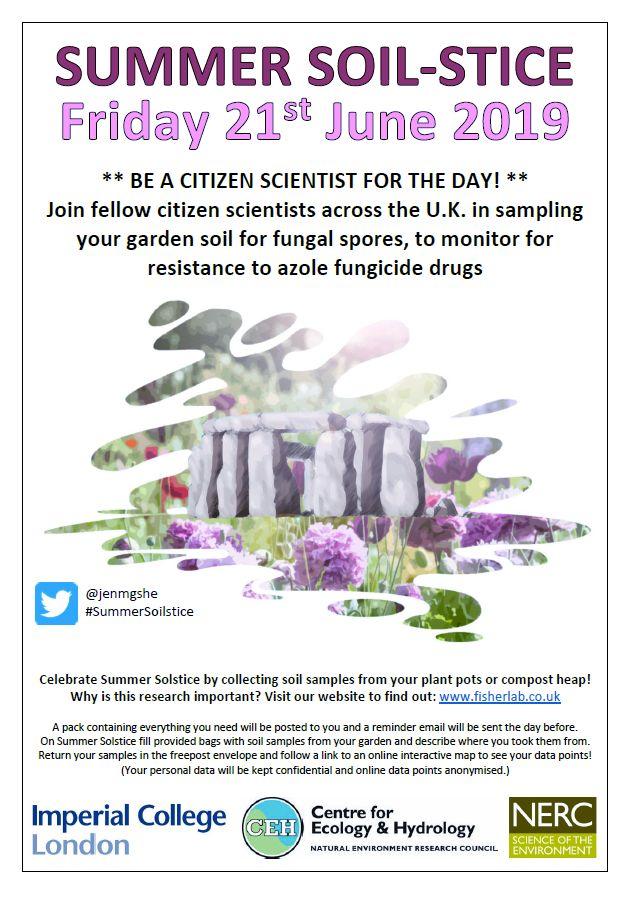