This quote is from Monty Python’s Life of Brian (1979), directed by Terry Jones. From this funny movie scene to a questionable cure for plague and its central importance for gin, juniper has long been a significant species in our cultural landscape. To celebrate National Juniper Day (15 March) and mark 2020 as the International Year of Plant Health, Flora Donald discusses our changing relationship with juniper and the latest threat it faces in the physical environment...

When I saw a PhD advertised by UKCEH to research the infection of juniper with an introduced plant pathogen, I knew I had to apply for it. Juniper is a great species to study, not only for its ecological value but also its cultural and historical importance, and because it grows in beautiful places, which I’ve had the joy of visiting as a result of my successful application.

Juniper is one of only three conifers native to the UK, surviving the last ice age and rapidly expanding across the country following glacial retreat. As a result, many bird, insect, fungi and other plant species have co-evolved with juniper, relying on it as a source of food, habitat, shelter and protection from grazing.

People have also had ready access to juniper for a long time, devising uses for all parts of the tree. Juniper wood burns hot and it produces little smoke, making it a favourite among those concealing production of illicit spirits from the excise man. It is also highly aromatic, so was burned in houses to ward off witches and purify the air from diseases including the Plague.

Whether by accident or design, people have – and continue – to maintain juniper in the landscape, but the Highland Clearances marked the beginning of its struggle to survive dramatic changes in land use. Though still widely distributed across the UK, from sea level to the highest mountain tops, many of our juniper populations today are small, fragmented and moribund.

Attention returned to juniper in the 1990s with recognition of its importance for biodiversity. Many populations were very old (some trees can live for more than 300 years) and showed little sign of regeneration. Warmer winters probably account for poor rates of berry production and germination, while lack of suitable habitat, and over- and under-grazing, limit seedling survival. One solution, practised widely across the UK, was to raise juniper seedlings in nurseries and plant them out to supplement existing, wild populations.

"Though still widely distributed across the UK, from sea level to the highest mountain tops, many of our juniper populations today are small, fragmented and moribund."

At the start of the new millennium, however, rapid and disastrous mortality of juniper trees was observed in some key populations. In 2012 this was finally traced to infection with an oomycete (water mould) plant pathogen called Phytophthora austrocedri. The pathogen disperses in soil water or is transported in soil. It infects juniper mainly through the roots, then prevents nutrient transport by blocking the plant’s vital phloem tissue, girdling stems and killing whole trees very quickly.

The only other wild tree species that P. austrocedri is known to infect is Chilean cedar (Austrocedrus chilensis) in Argentina. Other infected cypress species have been intercepted in the horticultural trade but we don’t know how, when or where the pathogen was first introduced to the UK or how it spread to infect such a large number of juniper populations across Scotland and England.

What is driving infection?

To identify UK populations least at risk of infection and help target strategies to contain the disease, I’m researching environmental and land use factors that might drive infection.

I started by investigating what makes some parts of large juniper populations particularly susceptible to P. austrocedri, sampling the distribution of symptoms across three, geographically separate juniper populations with contrasting habitats and environmental conditions. Although the number of dead trees differed between populations, I found pathogen DNA was widely distributed across all three locations. Despite differences in levels of browsing damage, associated plant communities and topography, the area of P. austrocedri symptoms (discoloured or dead foliage) always increased in wet soils.

Therefore, wherever juniper grows in wet soils, limiting activities which could move infected soil, such as fencing, drainage and recreation, could reduce the risk of introducing and spreading the disease. 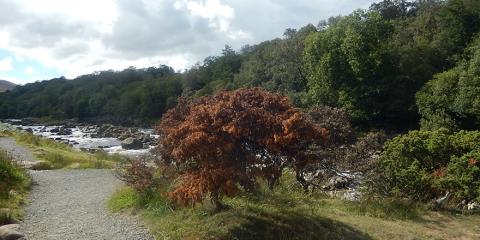 I’m now exploring whether soil moisture best predicts the national distribution of P. austrocedri and whether disease outbreaks are linked to locations where planting was carried out to try to restore juniper. I’m also using data from repeat aerial surveys to identify factors, such as soil type and location of footpaths, that might promote pathogen spread over time and to get an idea of how far the pathogen can disperse within a few years.

Juniper is a great example of how our changing attitudes and needs from the natural environment can shape the fortunes of particular species and habitats. As the introduction of novel plant pests and diseases continues to increase with the expansion of global trade and travel networks, we need to modify our actions to maintain functioning ecosystems that benefit us all.

You can help keep juniper and other tree populations healthy after a day out by washing all mud and leaves from boots, bikes, buggies etc before you leave, greatly reducing the risk of accidentally introducing pests and diseases to new areas. Follow the links below for further advice. 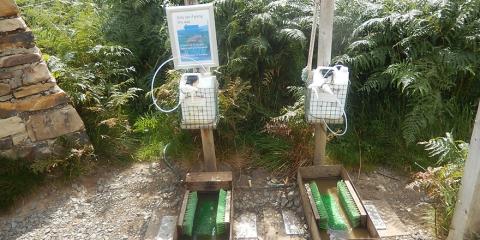 Image: a boot washing station at High Force in the North Pennines (Photo by Flora Donald). 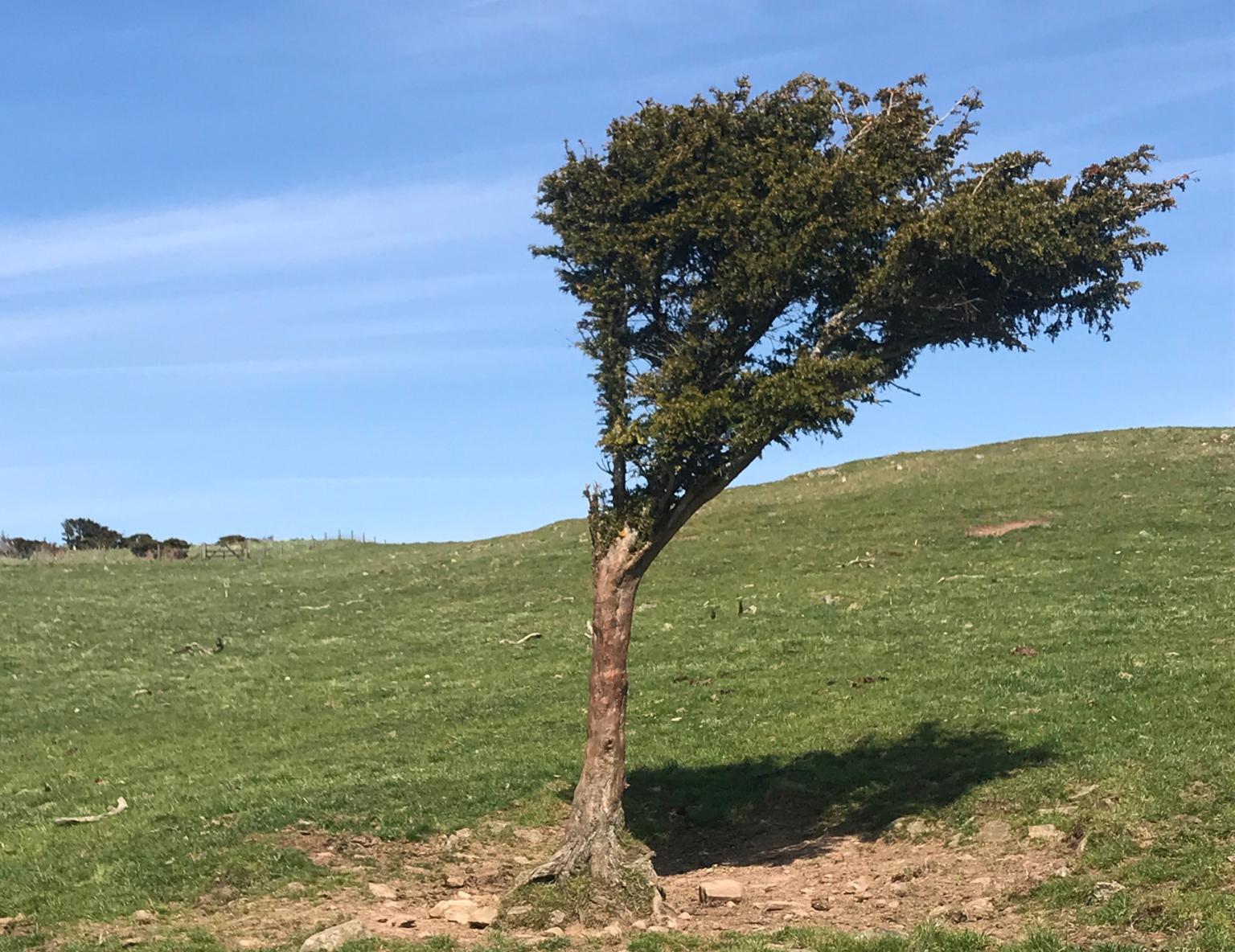 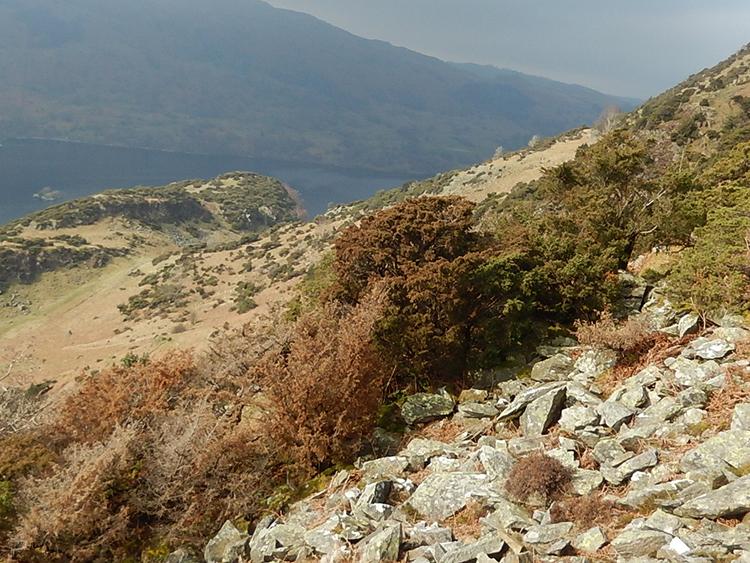