Congratulations to our CEH colleagues Bob Moore and Steven Cole who were among the recipients of an Innovation Award for their work on a novel system for forecasting surface water flooding and impact, piloted during the 2014 Commonwealth Games in Glasgow. The project was awarded the Royal Meteorological Society Innovation Award for 2018, presented at the Society’s AGM this week (15 May 2019)...

Commissioned by the Scottish Flood Forecasting Service - a partnership between the Scottish Environment Protection Agency (SEPA) and the Met Office supported by Scottish Government – the project involved contributions from the Centre for Ecology & Hydrology (CEH), the James Hutton Institute and the Met Office. Deltares provided additional support to SEPA in configuring the system within their Flood Early Warning System operational environment.

The lead scientists responsible for the project at CEH, and among the joint recipients of the Innovation Award, were Bob Moore and Dr Steven Cole.

How the system was developed

CEH provided its Grid-to-Grid (G2G) hydrological model to forecast surface runoff on a 1km grid for a 10km square area over Glasgow, and coupled this with the G2G model with Scotland-wide coverage. Surface runoff generation within G2G accommodates the effects on the receiving rainfall of land-cover, slope, soil/geology, and the evolving soil moisture conditions. CEH developed a novel methodology for accumulating surface runoff over different durations and linking these to SEPA’s pluvial (rainfall-related) flood risk maps. These digital maps give the extent and depth of surface water flooding for design storms of differing rarity/severity and associated impacts. They were calculated using a detailed flood inundation model and receptor datasets on people, properties and transport. The design storms use CEH’s Flood Estimation Handbook assessments of return period for rainfalls of given depth and duration, and proposed rainfall profiles before allowance for storm drainage.

How the system works

When used with a spread of possible rainfall forecasts (called an ensemble forecast) from the Met Office, the likelihood of flooding and associated impacts for different severity levels can be assessed. As a new ensemble rainfall forecast is issued by the Met Office (typically, every six hours), the G2G model is run in real-time and an assessment made of flooding risk and its impact over the forecast horizon of 24 hours. CEH and SEPA scientists worked closely together to develop practical ways of visualising the spatial risk (on a 1km grid over Glasgow) of heavy rainfall, surface water flooding and its impact on people, property and transport. The resulting visualisation tools were used in preparing the Surface Water Flood Briefing, and in turn helped inform the contingency planning meetings held each day during the Commonwealth Games. 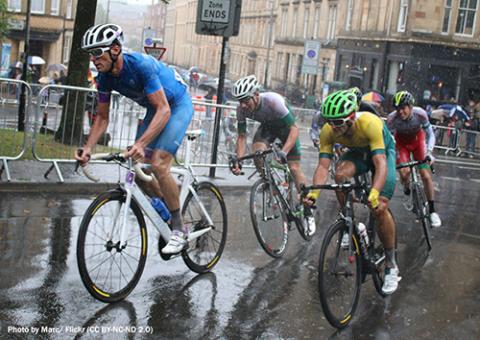 The resulting visualisation tools were used in preparing the Surface Water Flood Briefing, and in turn helped inform the contingency planning meetings held each day during the Commonwealth Games.

While the fortnight of the Games enjoyed very good weather, on the last Sunday (3 August 2014) convective storms developed over Glasgow. The system’s assessment of surface water flooding increased from low to medium likelihood of minor impacts. Notably, heavy rainfall caused some surface water ponding on the roads during the Men’s Cycling Road Race through Glasgow (pictured). Post-event, feedback from the contingency planners highlighted the importance of the forecasts by stating "hanging on every word (of the forecast) when the weather turned and the forecasts were pretty accurate".

Current and future use

The Glasgow Pilot system continues in use today, and planning is in progress by SEPA to build on this experience to extend the system to serve other urban communities across Scotland. Further details are available in the Project Final Report "Surface water flood forecasting for urban communities" and in the Journal of Flood Risk Management paper "Developing surface water ﬂood forecasting capabilities in Scotland: an operational pilot for the 2014 Commonwealth Games in Glasgow".

Developments under the Natural Hazards Partnership

The Glasgow Pilot system builds on complementary CEH research on surface water flooding under the Natural Hazards Partnership (involving the Health and Safety Executive and Met Office), with co-funding from the Environment Agency and Flood Forecasting Centre (FFC). The work for FFC, referred to as the Surface Water Flooding Hazard Impact Model (SWF HIM), is currently progressing to full operational deployment with England and Wales coverage, following successful pre-operational real-time trials over the last two years.

A paper for the FLOODrisk 2016 European Conference on Flood Risk Management provides an overview of the Glasgow Pilot, the NHP SWF HIM and a demonstration extension to forecast (fluvial) river flooding impacts over Scotland.

Highlight statements from our lead scientists

Dr Steven Cole: "Due to high uncertainty in forecasting the precise location of rainfall, particularly in convective situations, a probabilistic ensemble approach was needed for the new Glasgow surface water flood risk forecast tool. A particularly novel aspect is that the tool goes beyond forecasting the likely location of surface water flooding to embrace information on potential impacts on people, property and transport. This should help emergency responders make timelier and better informed decisions."

Bob Moore: "To see a project through from inception to delivery that culminated in actual use within the Glasgow 2014 Commonwealth Games proved an exciting and rewarding experience. It showcased the latest CEH science on forecasting surface water flooding risk and, for the first time in the UK, produced an operational system warning of potential impacts to people, property and transport. The transferable nature of the approach means that we are looking forward to working with SEPA on its refinement and future application to benefit other urban communities across Scotland at risk from surface water flooding."

It showcased the latest CEH science on forecasting surface water flooding risk and, for the first time in the UK, produced an operational system warning of potential impacts to people, property and transport. Bob Moore, Centre for Ecology & Hydrology

Commendations of the system

Michael Cranston (when SEPA’s Flood Forecasting and Warning Manager): "The Glasgow Pilot project has delivered a novel approach to forecasting the impacts of surface water flooding in real-time which is at the forefront of scientific developments in the UK."

Dr Aileen McLeod (when Scotland’s Minister for Environment, Climate Change and Land Reform): "The ground-breaking capabilities developed by SEPA to alert for surface water flooding was an essential part of our contingency planning during the Commonwealth Games."