Despite the many setbacks Covid-19 has caused this year, a repeat of the ‘Bunce’ Woodland Survey of Great Britain is now under way for a third time since 1971. The UK Centre for Ecology and Hydrology (UKCEH), in partnership with the Woodland Trust, is repeating the comprehensive ecological survey of woodlands across Britain, with the help of the latest data collection technology. UKCEH Land Use Group Data Manager Claire Wood explains more…

In the early days of the Land Use Group, at our forerunner the Institute of Terrestrial Ecology, ground-breaking ways of sampling the environment in a standardised, statistically robust and repeatable manner were pioneered by Bob Bunce and colleagues. The first national survey to use these methods was a woodland survey undertaken in 1971, which included 103 sites across Great Britain, and an additional 27 native Scottish pinewood sites. Information regarding trees, shrubs, ground flora and soils was collected from 16 plots at each site. The methods used were documented by Bunce & Shaw1, and became the basis of a standard blueprint for subsequent ecological field surveys.

Between 2000 and 2003, the 103 woodland sites were re-surveyed, creating a data resource that has yielded invaluable information regarding changes in British woodlands. Analyses showed the woods were becoming increasingly homogenised in terms of species composition and structure, with a decline in woodland specialist plants, and reduced regeneration of trees and shrubs. Change was correlated with increased shade and an increase in soil pH, thought to be due to recovery from previously high sulphur and nitrogen deposition, and lack of active management.

Above: images from the survey's new photo gallery (photos by C O'Rourke).

The latest re-survey is now under way and will include a repeat of the 27 Scottish pinewood sites for the first time. Thanks to a previous ‘data rescue’ project, all of the original resources from 1971 (such as maps and data) required for a repeat survey are in place, in a re-usable format, allowing the addition of these sites. Consequently, the collected data will provide an unprecedented view of change in the Scottish pinewoods over the past 50 years.  In this time, many of the pinewood sites have been altered through commercial planting, although some are now being restored. These important sites form the core of the remaining Caledonian pinewoods dominated by native Scots pine, Pinus sylvestris.

In terms of data collection technology, the survey has changed beyond recognition. Whereas previously, data were collected using waterproof paper survey sheets and entered into a computer later on, we can now use online tools and apps in the field.  Since June 2020, our teams of surveyors have been out in the woods (socially distanced), gathering soils and vegetation data from sites across the UK, using the ArcGIS tool Survey123 on lightweight smartphones or tablets. For the surveyors, data are easily submitted straight from their device into the central database, including GPS locations, photos and maps, minimising post-processing for office staff. 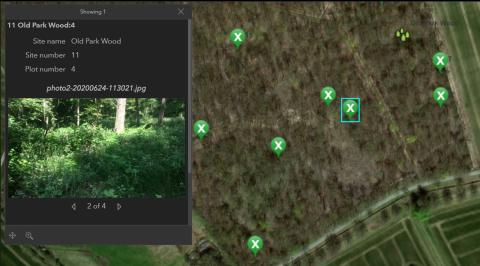 One major benefit this brings to the survey is the creation of a new photographic gallery of the sites, providing a visual resource of the range and variation to accompany the collected data. Even in 2000-2003, digital photography was still in its infancy, therefore the previous photographic record has been limited. In terms of monitoring survey progress, staff in the office can keep an eye on site completion via the ESRI Operations Dashboard and Photo Viewer Apps.

Above: On the left a woodland scene and, on the right, a photo showing ash dieback.

It is now nearly 50 years since the original surveys. Since then, the urgency to comprehend the changes in woods has increased, with new pressures to understand, particularly grazing, browsing, and the impacts of tree disease, such as Chalara ash dieback. Data collection is due to be completed in 2022. 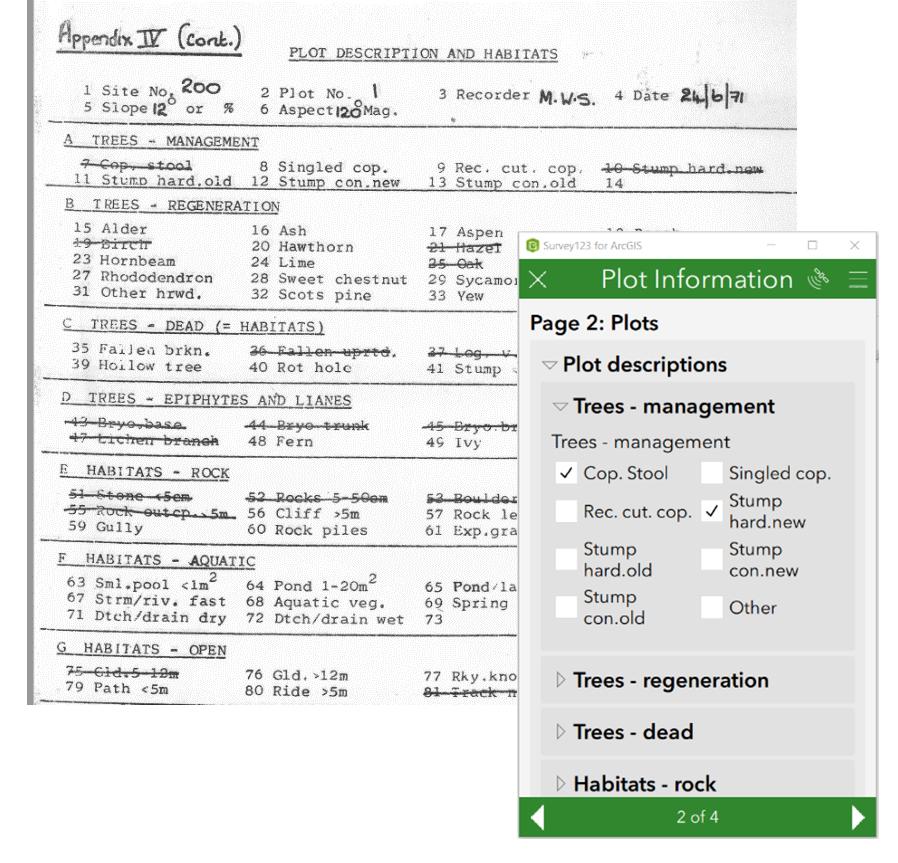