An online portal developed by the UK Centre for Ecology & Hydrology (UKCEH) will enable forecasters in West Africa to provide communities with earlier and more reliable warnings about large storms.

Storms in the Sahel region, which can reach over 100km in size, have become more extreme since the 1980s due to global warming, with more intense rainfall.* Severe flooding during the monsoon from June to September causes human and livestock deaths, plus damages property and infrastructure, leaving thousands of people without homes and livelihoods.

State-of-the-art weather forecast models struggle to predict where new storms will hit and how strong they will be, which makes it difficult to provide warnings to people in affected areas so they can protect their property and livestock or get out of harm’s way.

National forecasting agencies in Africa can already make predictions of how storms will behave in the next couple of hours by observing current atmospheric conditions, and analysing hundreds of historical storms.

Now, thanks to a recent breakthrough by UKCEH scientists, they can make these short-term forecasts, known as ‘nowcasts’, for six hours ahead and with a higher degree of accuracy. The new research found drier soils can increase the intensity of storms when they are on the move, affecting where they travel and the amount of rainfall they produce.

These novel nowcasting predictions and related satellite observations for West Africa are available via UKCEH’s new free portal, which has been funded by the Natural Environment Research Council (NERC).

National forecasters can interpret the data and make localised forecasts, sending out warnings to people in areas that are expected to be hit by a storm. Last year, as part of a trial of the nowcasting tool, forecasters in Senegal used it to issue a severe weather warning to the public via text message.

Dr Steven Cole of UKCEH says: “The portal is a great example of how new scientific understanding can be translated into useable real-time tools by working with forecasters. Importantly, this will support communities in West Africa to better manage flood risk from intense rainfall.”

A recent study** found that using data about land surface temperatures improves predictions about the path and strength of an approaching mesoscale convective system (MCS) up to 12 hours ahead. These ‘megastorms’ can be bigger than the size of England and unleash over 100mm of rainfall in just an hour.

“We found a surprising level of predictability of storms from land surface temperatures when testing our methodology on historical data, and West African forecasters are finding our approach very useful for their work,” says Professor Chris Taylor of UKCEH.

“We would expect mesoscale convective systems elsewhere in the world to also be influenced by drier soils. Therefore, our methodology could potentially be used to improve storm and flood warning systems in tropical regions such as South Asia and Australia, as well as parts of USA and South America.”

The new nowcasting portal allows forecasters to observe storm clouds in near real-time via satellite and compare them with historical storm behaviour, plus view data on current land surface conditions. The online tool then uses these data, updated every 15 minutes, to calculate the probability of a mesoscale convective system reaching different areas of the Sahel between the current time and six hours ahead.

UKCEH scientists are continuing to work with forecasting services in West Africa to increase the advance warning time and its reliability by combining more factors influencing storm behaviour within their nowcast modelling, in addition to land surface temperature. These include soil moisture, atmospheric humidity, wind conditions and the amount of rainfall there has been in preceding days.

As part of a collaboration with ANACIM, the national meteorological service in Senegal, UKCEH has also developed short-term forecasts of potential flood impacts and risk in Dakar which are available on the portal. It also hopes to work with other forecasting services to provide this service for other areas.

The new nowcasting portal has been produced as part of UKCEH’s Land Air Water International Science (LAWIS) programme funded by NERC, part of UK Research and Innovation (UKRI), and follows work carried out in other projects in West Africa. These include GCRF African SWIFT, supported by UKRI’s Global Challenges Research Fund, and Nowcasting Flood Impacts of Convective storms in the Sahel (NFLICS), funded by NERC and the Foreign, Commonwealth and Development Office.
Forecasters and researchers can apply for access to real-time data from the portal by emailing nowcasting-portal@ceh.ac.uk

*UKCEH has been carrying out climate research in West Africa for several years, in order to support improved forecasting that will enable better decision making by town planners, farmers and communities. A study led by Professor Chris Taylor, published in the journal Nature in 2017, found extreme storms in the Sahel have tripled over the past 30 years due to global warming. (DOI: 10.1038/nature22069).

Media enquiries
For screenshots from the portal and other images, or interviews and more information, please contact Simon Williams, Media Relations Officer at UKCEH, via simwil@ceh.ac.uk or +44 (0)7920 295384.

These images from the portal show storms (in red) across West Africa on 27 April 2022. 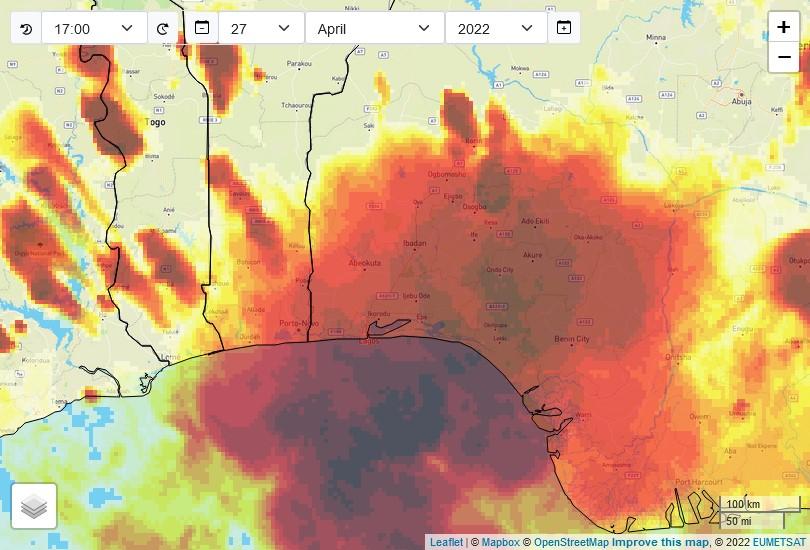