The UK-based Centre for Ecology & Hydrology (CEH) has led an international team of scientists who reveal global warming is responsible for a tripling in the frequency of extreme West African Sahel storms observed in just the last 35 years.

Professor Christopher Taylor, a Meteorologist at CEH, and researchers from partner institutions including Université Grenoble Alpes in France, also suggest that climate change will see the Sahel experience many more instances of extreme rain in future.

Professor Taylor and the fellow scientists’ findings – published in the journal Nature – note that further strengthening of intense storms in the Sahel known as Mesoscale Convective Systems (MCSs) will increase the risk of more frequent and severe flooding and disease due to poor sanitation in West African cities. The findings are also being presented this week at the General Assembly of the European Geosciences Union at its meeting in Vienna, Austria. 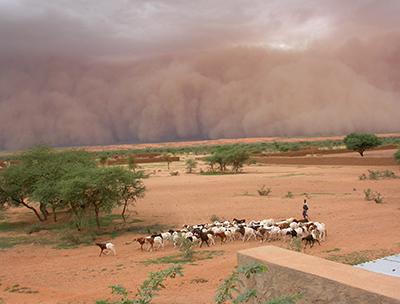 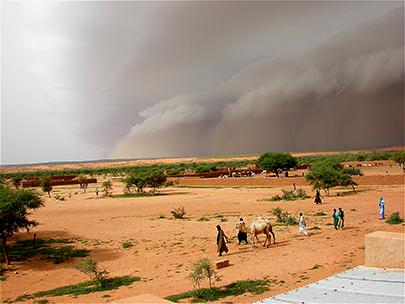 The Sahelian storms are some of the most explosive storms in the world, containing clouds that can grow to a height of 16km above the ground. In 2009 a downpour of 263mm over several hours forced 150,000 residents of Ouagadougou, in Burkina Faso, to leave their homes.

The study, which has analysed trends from 35 years of satellite observations across Africa, provides unique insight into how some of the most violent storms in the world are responding to rising global temperatures.

The study... provides unique insight into how some of the most violent storms in the world are responding to rising global temperatures

The research indicates that MCS intensification is linked to increasingly hot conditions in the Sahara desert resulting from man-made greenhouse gas emissions. Saharan warming affects storm intensity across the Sahel, a band of semi-arid land to the south of the desert which is home to some of the most vulnerable populations on the planet.

Professor Taylor said, "Global warming is expected to produce more intense storms, but we were shocked to see the speed of the changes taking place in this region of Africa."

Co-author Professor Douglas Parker, Professor of Meteorology at the University of Leeds, UK, said, "African storms are highly organised meteorological engines, whose currents extract water from the air to produce torrential rain. We have seen these engines becoming more efficient over recent decades, with resulting increases in the frequency of hazardous events."

In a case study on the flooding in Burkina Faso, Dr Abdoulaye Diarra, Senior Researcher at the International Institute for Water and Environmental Engineering in Ouagadougou, Burkina Faso, explained that a total of 77 flood events have been recorded in Burkina Faso during the 31-year period from 1986 to 2016. "The floods dynamic has increased in the Burkina from a frequency of 11 major events over 10 years (1.1 flood event/year) between1986 to 2005 to a frequency of 55 over 11 years (5 flood events/year) from 2006 to 2016," he said.

“The damages are generally more important in the urban area where runoff is very important and watercourses are limited. The 2009 flood (1 September), focused in Ouagadougou, caused heavy damage in the capital. More than 50 percent of the city’s territory, including the main hospital of the city, was flooded."

The research was funded by the Department for International Development (DFID) Future Climate for Africa programme under the African Monsoon Multidisciplinary Analysis 2050 (AMMA 2050) project and the Natural Environment Research Council (NERC).

Other institutions involved in the research included the National Centre for Earth Observation, the University of Leeds, as well as those from France: the Centre National de Recherches Météorologiques, Université Grenoble Alpes, Université Paris Diderot and Sorbonne Université.

CEH issued a press release for this story. Contact the CEH Press Office for further information.