The CEH Land Cover® plus: Crops map was validated using data collated by the Rural Payments Agency, Rural Payments Wales and Scottish Government Rural Payments and Services. These datasets comprise a record of all land registered for agricultural use and are submitted annually by farmers. Crops are assigned to unique land parcels using the Land Parcel Identification System (LPIS). The crop map was intersected with LPIS parcels, excluding those where a one-to-one match between the Land Cover® plus: Crops map polygon and the LPIS parcels was not clear. We also excluded LPIS parcels where multiple crops had been registered in the same year, because the locations of each different crop within the parcel are not recorded and so cannot be compared to corresponding Land Cover® plus: Crops polygons with multiple crops.

Total accuracy was assessed as overall percentage correct and the kappa statistics, which takes account of expected accuracy under random assignment. Overall percentage correct were 95% for 2015 and 87% for 2016. In both 2015 and 2016 kappa was around 0.82 (largely because of the large number of grass fields included in the 2015 data lead to a higher expected accuracy under random assignment).

The combined results of the validation for Land Cover® plus: Crops 2015 and 2016 is shown below:

Some apparent inaccuracy is to be expected due to differences in the crop classifications. For example:

Further expected misclassifications are listed in the metadata - see the attached spreadsheet [xls].

For the first CEH Land Cover® plus: Crops map, in 2015, the concept and approach was tested. The dataset, which covers all of Great Britain, was only finalised where satellite imagery and ground-truthing data of a sufficient quality and quantity were available. Therefore, the quality of the 2015 CEH Land Cover® plus: Crops data varies according to geographical location, with only those parts of the dataset considered to be of an acceptable quality available for licensing. These areas are coloured red in the image below (ie. data for Scotland, Wales and the area from the Welsh borders, through the Midlands to Lincolnshire). 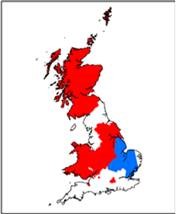 The figures below, which have been independently validated, represent indicative accuracies for CEH Land Cover® plus: Crops map 2015 in just Wales and Scotland: