Despite over 50 years of effort to halt its decline, the Large Blue butterfly was pronounced extinct in Britain in 1979. Today the butterfly can be found on 33 sites in the south-west of England. This is a tribute to a large-scale conservation programme underpinned by innovative science and implemented by a determined and broad partnership

From the 1790s, when the butterfly was first documented as British by William Lewin, all knowledge about its life history and distribution came from butterfly collectors. This enigmatic species was prized by collectors due to its great beauty and rarity. Frustratingly, they were unable to procure perfect specimens as it proved impossible to rear them in captivity - caterpillars always died when they were about three weeks old.

This conundrum was solved in the early 1900s by three of the great lepidopterists of the day: Purefoy, Frohawk and Chapman. It was discovered that after feeding on the flowers of wild thyme and reaching their fourth instar, caterpillars fell to the ground, where they were found by red ants (Myrmica species). It was confirmed that the ants picked up the caterpillar and took it into their underground nest, where it was placed in the brood chamber. The caterpillar spent the next 10 months feeding on ant grubs before pupating and then emerging as a butterfly the following year.

Owing to the difficulty of maintaining ant nests in captivity, this information failed to produce cabinet specimens or halt the decline of the butterfly. In 1950 the Large Blue occupied only 25 sites, which rapidly declined to two by 1972. Although some sites were destroyed by changes in land use such as ploughing or afforestation, most still supported wild thyme and red ants.

So why did the butterfly become extinct in Britain in 1979?

Searching for a scientific solution:

In 1972, perplexed and concerned by the rapid decline in Large Blues, the Nature Conservancy (now Natural England) asked a young PhD student, Jeremy Thomas, to see if he could discover the cause of the inexplicable demise of the Large Blue.

For the next six years Jeremy spent every summer on Dartmoor, monitoring all aspects of the Large Blue’s life cycle. By following the fate of over 1300 butterfly eggs he was able to show that most deaths took place in the ant nests. He found that there were four species of red ants (Myrmica) living on Dartmoor and while all of them would pick up a Large Blue caterpillar, these caterpillars only survived in the nests of one species, Myrmica sabuleti. The butterfly had evolved to fool this ant into accepting it as a dangerous guest, while all other red ant species quickly recognise and kill the impostor.

Jeremy meticulously measured the precise habitat niches of the four different species of red ant and found that each one prospered in different temperature zones, and that the ground temperature was largely determined by turf height. He then led a detailed survey of all former Large Blue sites and discovered that although many still supported thyme and red ants, Myrmica sabuleti was either absent or present in very low numbers.

The work concluded that changes in agricultural practices had resulted in a massive reduction of livestock grazing and, coupled with the devastating effects of myxomatosis on rabbit populations, turf heights had imperceptibly increased. In order to conserve Large Blues, sites would have to be managed to maintain the precise conditions that enabled Myrmica sabuleti to prosper. Unfortunately this pioneering work came just too late to save the butterfly.

Natural England and the UK Centre for Ecology & Hydrology joined forces to manage an ambitious programme to reintroduce the Large Blue onto a former site in Dartmoor owned by the National Trust. The site was carefully managed and surveys soon showed that Myrmica sabuleti nests had increased and spread. A suitable Large Blue donor population then had to be found, which was difficult given that the butterfly was already extinct across most of northern Europe for the same reasons as in Britain.

The Swedish Nature Conservancy generously permitted eggs to be removed as an experiment to ascertain whether the ‘Baltic race’ would be able to adapt to the British climate. Results of this experiment were very positive and a further collecting trip was made in 1984. By 1985 Large Blues were again flying freely in south-west England.

Encouraged by the initial success on Dartmoor all former and potential Large Blue sites were surveyed and a priority list of potential introduction sites was developed. Landowners and site managers met scientists through the Joint Committee for the Conservation of the Large Blue. Methods for managing sites were debated, experiments set up and the landscape restoration was initiated in four regions which formerly supported Large Blues (Cotswolds, Polden Hills, Dartmoor and the North Atlantic coasts of Devon and Cornwall). Initially there were many setbacks and it soon became apparent just how difficult it was to manage sites - they needed to be fenced, trees and scrub had to be removed or managed, and intensive livestock grazing was required in spring and autumn.

The success of the project is largely due to the dedication of partners, their highly skilled site managers and the regular monitoring which is undertaken, in part by volunteers from a variety of organisations. The cost of restoration and management has been significantly offset by agri-environment schemes - administered by Natural England, often on advice from UKCEH. Core costs of the project have been met by UKCEH, Natural England under the Species Recovery Programme, Butterfly Conservation, University of Oxford and in some years by corporate sponsorship. Partners contribute their sites, staff time and often more.

In the UK, the partnership is keen to replicate the landscape-scale metapopulations of the butterfly which occupy parts of Somerset. Work is now underway in the Cotswolds, Dartmoor, South Devon, as well as the North Atlantic coasts of Devon and Cornwall. The success of this project led to a major, European-funded research programme, MacMan. It used the approach pioneered by the Large Blue project to understand and then conserve four other species of Large Blue, which exist outside of Britain, across Europe.

Since UKCEH began work on the project in the 1970s, it has monitored the effect that managing a site for Large Blue habitat has had on other species. It quickly became apparent that other rare species of plants, insects and birds had suffered from the same changes in agricultural practices, and also benefited from scrub management and grazing. Several species listed as endangered have increased dramatically on Large Blue sites, contrary to their national trends. Conserving Large Blues has become a paradigm for insect community conservation.

In the late 1990s Large Blues spread onto land owned by Network Rail. UKCEH worked closely with the company, which adopted policies to help conserve the butterfly. UKCEH devised and oversaw plans that created optimum habitats for Large Blues on two sites that were undergoing engineering work - incidentally this resulted in financial saving for Network Rail. On one site the design includes variable aspects and soil depths, providing additional cooler micro-niches for Myrmica sabuleti to mitigate against the effects of future climate change. A third Network Rail site now supports one of the largest colonies of Large Blues in northern Europe, which is leased to UKCEH for research. 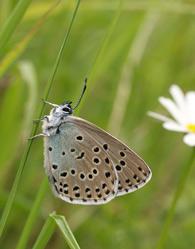