On top of a building at the University of Cape Coast in Ghana, Africa stands a blue box, the new home of the reference air pollution instrument. Inside the pumps are running and through a small vent air is being sucked into the instrument once again. The air here is different to that in the UK. On some days the air is hot and dry, moving in from over the Sahara Desert region. On others, it is warm and humid, bringing in moisture as it moves from the tropical region over the south Atlantic.

Meanwhile, the Kigali Collaborative Research Centre (KCRC) in Rwanda is busy preparing their TEOM instruments. Test deployments around Kigali bring in researchers from the University of Rwanda and Carnegie Mellon University. Prof Tim Brown from KCRC notes that more than just providing instruments, the UK team helps to ensure that the instruments can work now and into the future. With this support, the goal is to test and then deploy the instruments to partners in Rwanda and throughout East Africa through AfriqAir.

Africa qualité de l’air, also known as AfriqAir, is leading the establishment of a network of low-cost and importantly reference grade instruments like the ones from the UK in cities in Ghana and Rwanda. Twenty-five instruments have been sent to the network for installation. In addition, another 40 instruments were taken by the French Laboratoire Interuniversitaire des Systèmes Atmosphériques (LISA) group to be included as part of the International Network to study Deposition and Atmospheric composition in Africa (INDAAF) network.

Dr Mike Giordano from AfriqAir tells us why it's important to monitor air quality and establish a network for the region:

"Recent studies have estimated that there are at least hundreds of thousands, if not more than one million, premature deaths attributable to air pollution in Africa. These studies are potentially on the low end of estimates, however, because they rely on spatio-temporally sparse datasets. These data are usually from satellites or global atmospheric chemistry models (whose resolution is generally at best a few kilometres by a few kilometres), singular location monitoring efforts with daily or hourly averages, or simply emissions inventories. Unfortunately, using these datasets means that estimates on overall air quality impact may be biased by the location of the monitoring (e.g, singular monitors being in rural or semi-urban areas), satellite retrieval algorithms that are calibrated for the Global North instead of various parts of Africa, or inventories that are simply incomplete.

Building air quality networks in Africa is necessary both to estimate the total impact of air pollution and to begin combating the problem."

Another important activity of AfriqAir is to establish air quality monitoring stations in a wider range of locations.

Dr Kofi Amegah from University of Cape Coast, Ghana, shares on Twitter how one of the instruments from the UK is now being used to record air quality information for the first time ever at a location outside of the capital city, Accra. He told us:

“The donation of TEOMs to the Ghana Urban Air Quality Project (GHAir) which I lead through the AfriqAir network is critical to bridging the air quality data gaps in Accra and other metropolitan areas of Ghana to elicit sustained investment in air pollution control for population health gains. In close collaboration with the Accra city authorities, we have installed two TEOMs at the Accra City Hall and Kwame Nkrumah Circle Interchange, and another at the University of Cape Coast which is the very first regulatory monitoring of any kind outside of Accra. We are grateful to Christine Braban and the team at UKCEH for the effort in getting these TEOMs to Africa where air quality monitoring is weak or non-existent." 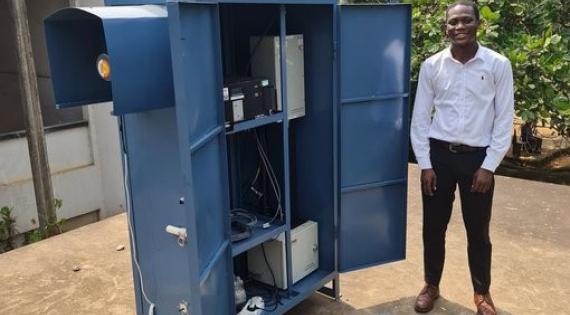 Setting up the instruments is time-consuming; the logistics can be challenging and funding time for researchers and technicians to work on the project, and for consumable parts for the instruments, can be difficult. Despite the challenges, this work is important and is necessary in being able to establish a longer-term air quality monitoring network for Africa. Local partnerships are key to the installation and operation of donated instruments and to facilitate the crucial measurement data to be collected and interpreted.

Dr Mike Giordano explains how an instrument like the TEOM can be used to achieve some of the goals of the network and how their new locations were selected.

"AfriqAir is dedicated to sustainably expanding air quality monitoring over Africa. One of the best ways to affordably increase air quality monitoring is to use hybrid measurement networks consisting of one reference-grade monitor surrounded by multiple low-cost sensors. These hybrid networks allow for high spatio-temporal resolution measurements while being relatively easy to maintain and deploy. The reference-grade monitor (TEOM in this case) allows for the low-cost sensors to be calibrated and quality-checked regularly, which is essential for attaining high-quality data from low-cost sensors.

The locations for the current deployments of TEOMs are centred around building local technological and professional capacity for these instruments. A foundational belief of AfriqAir is that sustainable air quality monitoring is impossible without local partners capable of maintaining, operating, and analysing the instrumentation and data. Current TEOM deployments therefore give local partners hands-on time with the instruments while also establishing baseline PM2.5 measurements for areas without previous monitoring capacity. Full hybrid network deployments will follow soon."

Looking to the future

This is just the start of the TEOMs’ working lives in new locations. To make this a long-term success, all partners and supporters will need to build a sustainable way of maintaining the instruments and supporting the data they produce - a major challenge for all, but one with great benefits if achieved.

Dr Christine Braban again: "In order to operate a monitoring network long term, a team of people are needed to cover instrument maintenance, data management, quality assurance and finally use of the air quality data to help inform the public, scientists and policy makers. Scientists at UKCEH, are working with AfriqAir, ANGA and other researchers to understand routes to sustainable long-term data and research."

Dr Mike Giordano: "The next steps to sustainable air quality monitoring in Africa are many. AfriqAir has previously written about what the next steps are for the organization and we continue to stand by the three tenets of infrastructure development, local capacity building, and open-access data. These TEOMs represent an amazing step forward on infrastructure development and right now we are hard at work on the next two steps. In the early months of 2022, AfriqAir will host a seminar series centred on the use and analysis of low-cost sensors and how to mix low-cost sensor, reference-grade monitor, and other freely available data products together to fill knowledge gaps. AfriqAir will also host a meeting in Pasadena, California this year to connect and showcase the work done by members all over Africa.

These efforts are of course aside from continued efforts to deploy more of the TEOMs and low-cost sensors both within Ghana and Rwanda and outside of those countries with other AfriqAir partners."

In support, access to air quality data is fundamental to tackling air pollution, says Matt Whitney from the Clean Air Fund. "It’s therefore great to see these monitors being taken up where they’re needed most, and our thanks to all the teams that helped to make this happen. We are exploring where the Clean Air Fund can continue to work with AfriqAir and partners to make the most of these monitors in building capacity and filling data gaps in the region."

Thanks to all our partners and colleagues for their contributions.

See part one of this story: Beginning the 4000-mile journey of a reference air pollution monitor