The following article, by Dr Nick Isaac, a macroecologist at the UK Centre for Ecology & Hydrology (UKCEH), was originally published on the British Ecological Society (BES) website. The British Ecological Society published a report in April 2022 exploring the UK pledge to protect 30% of land and seas by 2030. Dr Isaac, one of the report’s Steering Group members, writes about how close we are to achieving this target in practice, and if it will deliver for nature...

It’s more than a decade now since the Lawton report concluded that England’s protected area network was insufficient to protect viable populations of native wildlife. Sites were too few, too small, in poor condition, and isolated by an agricultural desert. During intervening years we have heard that the UK is among the most nature-depleted countries in the world, and a series of State of Nature reports have catalogued declining state of UK wildlife.

Against this alarming backdrop, a policy response to the UK biodiversity crisis is now taking shape. There is the post-Brexit agricultural subsidy regime that aims to reward land-owners for public goods (e.g. carbon sequestration, wildlife protection and flood mitigation). This also includes tiers for Local Nature Recovery and Landscape Recovery, the latter of which is being interpreted as government support for rewilding. There is the announcement to create legally-binding targets to “bend the curve” on species abundance and create large areas of semi-natural habitat. And perhaps most eye-catching is the pledge, supported by almost 100 governments of the world, to protect 30% of land and sea by the year 2030.

This "30×30" pledge is the subject of a new BES report, published on 22 April 2022. The report presents evidence on key issues about the current status of the UK’s protected area network, and contains policy recommendations for how 30×30 can contribute to the recovery of nature in the UK and deliver wider benefits to society.

One word that appears throughout the report is "effective". It’s clear that designation in itself is not sufficient: areas need to be protected effectively from external pressures. In the context of 30×30, this raises questions around whether certain site designations should count. For example, should fishing be permitted in Marine Protected Areas? And on land, what can be done to increase the levels of protection for nature within Areas of Outstanding Natural Beauty and National Parks (which do not meet internationally-recognised nature conservation standards, as it is not their primary function)?

"It’s clear that designation in itself is not sufficient: areas need to be protected effectively from external pressures." Dr Nick Isaac, UKCEH

This notion of effectiveness also relates to the degree to which protected areas actually deliver conservation outcomes, ie increases in the size of plant and animal populations relative to unprotected sites. The 30×30 pledge relates to the total area that is protected, but only half of our existing Sites of Special Scientific Interest are in favourable condition. As I’ve argued previously, increasing the quality of existing habitat is likely to be both cheaper and more effective than creating new habitat. Moreover, the conservation benefits will depend on the location and spatial configuration of any newly designated areas, so it really matters how decisions are made about new protected areas. The government’s preference seems to be for local bottom-up decision making and delivery, through Local Nature Recovery Strategies, Farmer Clusters and other initiatives. There is not currently a role for national strategic planning to ensure representation across habitat types, to prioritise regions that are especially nature-depleted, or areas that could act as stepping stones for species that need to shift their distributions in response to climate change.

It’s clear that protected areas have a central role in delivering the government’s ambitions for nature recovery in the UK, and that 30×30 is an important lever by which protected areas can become more effective. These welcome developments are part of a wider movement to reframe the nature conservation debate around aspirational goals, rather than lamenting what has been lost. Time will tell whether these bold promises will be sufficient to deliver for nature.

Rebecca Turner, a PhD student with UKCEH, was one of the chapter authors on the report. 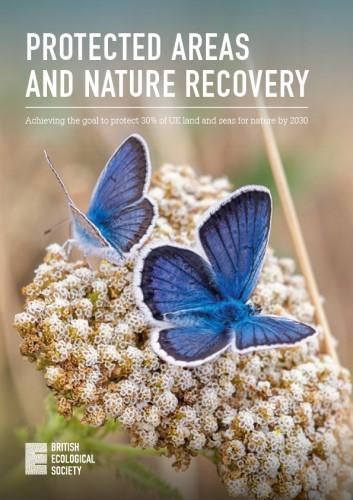