A tiny but loud, brightly coloured songbird from subtropical Asia could be emerging as a new invasive species in Britain, threatening to dominate the dawn chorus of native robins, blackbirds and warblers.

A new study led by UK Centre for Ecology & Hydrology (UKCEH) warns the red-billed leiothrix could become as familiar in gardens, parks and woodland as ring-necked parakeets, whose numbers have rapidly increased since becoming established in this country in the 1970s.

The red-billed leiothrix has already become established in several parts of Europe, and the new study documents new sightings in Britain, including a cluster in Wiltshire and Somerset, suggesting the species could soon become established in the wild. Like the parakeets, they are kept as cage birds and have got into the wild when they have escaped or been released.

The charismatic bird has a bright red bill, a yellow-orange throat and an olive green head and grey back, and its melodious song is comparable to the native nlackbird, robin or blackcap.

UKCEH ecologist Dr Richard Broughton, who led the study, published in the journal Ibis, explains: “If the red-billed leiothrix becomes established in Britain, they could soon be a familiar sight in our gardens, parks and woodland, with their rich song altering the dawn chorus as we know it today.

“Our study is the very first assessment of this species in Britain, and raises awareness of the fact that the birds have been sighted in Britain. The potential for the red-billed leiothrix to become established here had seemed very low, but the cluster of records in southern England suggest we need to take it seriously as a potentially new invasive species.”

Milder winters as a result of climate change will make it easier for the red-billed leiothrix to get established and spread in this country, while the prevalence of birdfeeders in Britain’s gardens would give it a reliable food source to tide it through any bad winters and weather.

Red-billed leiothrix are native to southern China and the Himalayas, and when established elsewhere, they have become an abundant and dominant member of the wild bird community. Populations are well established in France, Spain, Portugal and Italy as well as Japan and Hawaii.

Ecologists are concerned they may compete with native birds, such as robins, for habitat, living space and food, potentially harming their populations. However, the new study makes clear that more research is needed to establish the longer-term effects of their introduction.

Dr Broughton says monitoring of the red-billed leiothrix in Britain will be crucial in determining its prevalence in this country, and asked the public to report sightings via the British Trust for Ornithology’s BirdTrack app or the iRecord app. There is information about invasive species and how to report them on the Great Britain Non-native Species Secretariat website.

Media enquiries
Images of the red-billed leiothrix are available on request. For interviews and more information, please contact Simon Williams, Media Relations Officer at UKCEH, via simwil@ceh.ac.uk or +44 (0)7920 295384.

About the UK Centre for Ecology & Hydrology (UKCEH)
The UK Centre for Ecology & Hydrology is a centre for excellence in environmental science across water, land and air. Our 500 scientists work to understand the environment, how it sustains life and the human impact on it – so that together, people and nature can prosper. We have a long history of investigating, monitoring and modelling environmental change, and our science makes a positive difference in the world.

UKCEH collaborative studies have shown that introductions of non-native species are increasing at unprecedented rates across the world, with no sign of slowing down. We have led research initiatives over 15 years across the UK, the EU and globally, focusing on developing information systems, horizon scanning, surveillance and risk assessment. 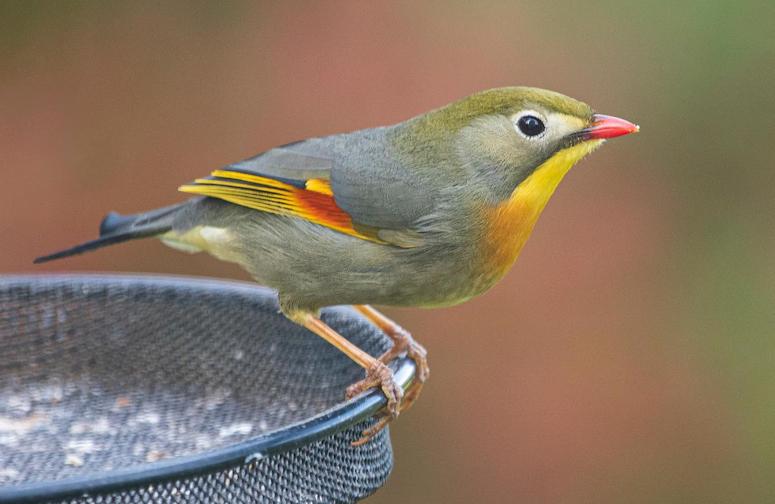 There have been several sightings of the Red-billed Leiothrix in Britain, including this one in Wiltshire.   Photo P Mumby