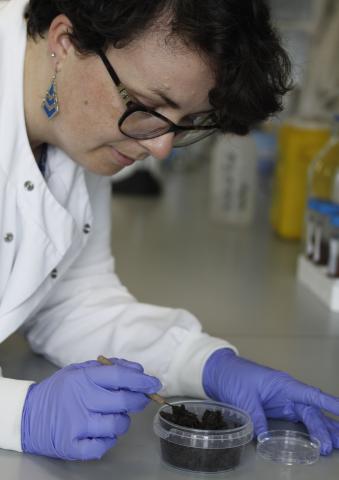 Microplastics in soil may not affect worms’ survival, but at high concentrations they can reduce fertility by up to 50 percent, new research shows.

Scientists from the Centre for Ecology & Hydrology (CEH) have discovered that when it comes to plastic pollution, size matters, according to their new study published in the journal Environmental Pollution.

Over 21 days they studied the effects of different sizes and types of microplastics, ranging from 13 to 150 micrometres (0.013mm to 0.15mm) in their longest dimension, on the survival and fertility of the small, common worm, Enchytraeus crypticus.

Worms play an essential role in nutrient cycling by breaking down decaying organic matter and releasing nutrients back to the soil, enabling plant growth. In addition, worms’ extensive burrowing activity aerates the soil and improves drainage.

Dr Elma Lahive, an ecotoxicologist at CEH (pictured), who led the study, said: “Worms are critical for the health of our soils.

“They aid crop productivity by improving soil fertility, as well as help prevent erosion and flooding. Therefore, any significant reduction in the populations of worms has potentially negative consequences for the health of soil ecosystems and knock-on effects for our food chain.

“Microplastics are now a very common soil contaminant and it has become a priority to assess the hazards they may pose to important soil organisms like worms.

“Our study provides a valuable new insight into the three factors influencing the hazard posed by plastic particles to soil organisms: concentration, size and plastic type.”

Dr Lahive and her fellow researchers at CEH tested two common plastics in their laboratory: polyamide, commonly known as nylon, and PVC. The worms were exposed to three different size ranges of nylon across a concentration range from 2-12% plastic in the soil.

Dr Lahive continued: “We found that microplastics present at high concentrations reduce reproduction in worms by up to 50 percent. The smaller the plastics, the greater the reduction in reproduction, which could be linked to ingestion. The worms we used have very small mouth parts and we found they ingested more of the smaller-sized microplastics compared to the larger-sized plastics.

“Given we know that microplastics are accumulating in our soils and can stay there for a very long time, we clearly need to understand the effect they are having on our soil ecosystems and the long-term risks they may pose.”

The scientists found that size and type of plastic had no impact on the survival of the worms over the testing period.

The study was funded by the Natural Environment Research Council (NERC).

About the worms
Enchytraeid worms are ecologically-relevant soil organisms, due to their important role  in the decomposition of organic material and bioturbation in many soil types worldwide. They are a model species in soil ecotoxicology. Their short lifespan enables tests to be carried assessing survival and reproduction in response to pollutants relatively quickly and reliably.

About the plastics
Nylon is a generic name for a family of polymers, polyamides. It has a broad range of commercial applications as fabric, fibres and films. PVC is the third most-widely produced synthetic plastic polymer, with numerous applications.

Funding
This research was supported by funds from the NERC GW4+ Doctoral Training Partnership under grant NE/L002434/1 and NERC National Capability funding to CEH under the UK-SCAPE project grant NE/R016429/1.

About the Centre for Ecology & Hydrology
The Centre for Ecology & Hydrology (CEH) is the UK’s centre for excellence in environmental science across air, land and water. CEH is a Natural Environment Research Council (NERC) research institute, part of UK Research and Innovation (UKRI). Our research extends from molecular biology to global climate modelling, and our fieldwork is carried out across the world, from the peatlands of Scotland to the semi-arid West African Sahel. For over 50 years, our experts have monitored and modelled environmental change, generating evidence-driven solutions to complex environmental challenges. We are home to around 500 environmental scientists, based across four sites in Edinburgh, Lancaster, Bangor and Wallingford.
www.ceh.ac.uk    @CEHScienceNews