The availability of a key prey for seabirds has changed dramatically over the past three decades, particularly in winter, with possible consequences for their population numbers, a new study has found.

In the first long-term study of its kind, led by the Centre for Ecology & Hydrology, researchers looking at the diet of a North Sea seabird, the European shag, found that the birds’ food source has altered substantially throughout the year.

In 1988, shags’ diets comprised almost 100 per cent sandeel, but by 2014 this had reduced to just 13 per cent, while the number of prey types increased from six to 12, the study of regurgitated pellets all-year-round over three decades at the Isle of May, Firth of Forth, has found. 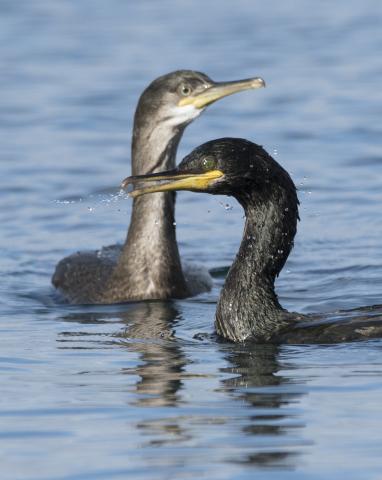 Climate change may be an important mechanism driving the observed patterns, since ocean warming is having pronounced impacts on fish populations in the North Sea.

The availability of prey and change in diet can affect seabirds’ survival rates and therefore populations because food is a key determinant of their biology, affecting their general health and condition plus the number of chicks they raise. As sandeel were considered one of the most favourable prey types in the North Sea, the increasing contribution of other fish to the diet may have important implications for shags and other seabirds.

Crucially, the study by the Centre for Ecology & Hydrology, University of Liverpool and Biomathematics & Statistics Scotland, which is published today in the journal Marine Biology, demonstrated that the decline in sandeel frequency in the diet was more marked during winter, when the majority of seabird deaths occur.

Therefore, the dietary patterns observed may have substantial implications for survival and may be an important factor contributing to the declines observed in some UK seabird populations, according to the researchers who carried out the study, which was funded by the Natural Environment Research Council.

Lead author Richard Howells of the Centre for Ecology & Hydrology explained that while previous research had been done during summer, when birds are at their nests and relatively easy to access, there had been limited information regarding seabird diet during the energetically challenging winter months and how these have changed over time, until now.

He said: “Our study addresses key knowledge gaps not only in the understanding of how birds are responding to the environmental impacts of climate change but also the factors underpinning the steep declines observed in many species. The overall picture for seabirds is a marked decline, particularly those who have traditionally relied upon sandeels.”

Mr Howells said that by exploiting a wider range of prey – such as codfishes, sculpins and flatfish - shags may be partly buffered to the predicted future impacts of climate-linked environmental change, although other seabird species may not have such flexibility.

However, he added that because they have to travel to different areas to find food than in the past, this may bring them into contact with potential new threats, such as tidal renewable developments.

Although populations of some birds have increased in recent years, all monitored seabird species apart from the cormorant have been Red or Amber listed. The Joint Nature Conservation Committee (JNCC) estimates that the UK’s European shag population fell by 45 per cent between 1986 and 2015, kittiwakes by 60 per cent and Arctic skua by 76 per cent. Worldwide, the overall seabird population declined by 70 per cent between 1950 and 2010, according to research by the University of British Columbia.

The State of the UK’s Birds, 2017, by the Joint Nature Conservation Committee

Study of global seabird populations by the University of Columbia

Centre for Ecology & Hydrology
The Centre for Ecology & Hydrology (CEH) is the UK's Centre of Excellence for integrated research in the land and freshwater ecosystems and their interaction with the atmosphere. CEH is part of the Natural Environment Research Council, employs more than 450 people at four major sites in England, Scotland and Wales, hosts over 150 PhD students, and has an overall budget of about £35m. CEH tackles complex environmental challenges to deliver practicable solutions so that future generations can benefit from a rich and healthy environment.
Follow the latest CEH research via Twitter @CEHScienceNews and @CEHseabirds

The University of Liverpool
The University of Liverpool is one of the UK’s leading research institutions with an annual turnover of £480 million, including £102 million for research.  Ranked in the top 1% of higher education institutions worldwide, Liverpool is a member of the prestigious Russell Group of the UK’s leading research universities.