A detailed analysis has shown that the second national lockdown had no further impact on reducing carbon dioxide (CO2) emissions in central London when compared to pre lockdown 2.0 levels, with both periods reporting reduction levels almost a third lower than the seasonal average.

Measurements from the BT Tower – taken by the UK Centre for Ecology & Hydrology and the University of Reading - show that emissions in the capital at peak emissions times (12pm-6pm) were down by an average of 28 per cent over the lockdown 2.0 four-week period compared to a long-term mean (2012-2019) for this time of year.

This was the same level of reduction as the period between the two lockdowns (i.e. 13 May to 4 November, inclusive), when emissions were also down 28 per cent compared to the seasonal average. By contrast, in the first lockdown, 12pm-6pm emissions in London were down by an average of 51 per cent.

Total CO2 emissions went up in November, as expected, due to increased heating at this time of year but were lower than the seasonal average due to less traffic, and reduced heating for shops and offices as a result of decreased commercial activity during the pandemic.

Dr Carole Helfter of the UK Centre for Ecology & Hydrology (UKCEH) says: “The weather during both the first and second lockdowns was generally milder than previous years, which might also have partly contributed to lower CO2 emissions through reduced heating. We have to bear in mind that some emissions such as heating will likely have been displaced out of central London into residential areas as we worked from home.”

She says the contrast in impact between the first and second lockdowns was not surprising, given that unlike March, many rules and changes in behaviour were in place in London prior to the renewed national restrictions on 5 November.

Dr Helfter adds that the reductions in CO2 emissions to date compared with previous years are effectively an historical anomaly. “There is already a vast quantity of carbon dioxide in the atmosphere and, as a long-lived gas, it remains there for many years. Therefore, while falls in emissions during the pandemic may appear significant, they will have little impact on global warming,” she says.

“Emissions in central London are likely to move closer to previous levels as commercial activity gradually returns and the capital’s daytime population increases,” she says.

"...while falls in emissions during the pandemic may appear significant, they will have little impact on global warming." Dr Carole Helfter, UKCEH

The atmospheric observatory on top of the 190m-tall BT Tower is one of a relatively small number of sites and the only one in the UK equipped to make direct measurements of CO2 and methane emissions. This means it provides an essential role in pollution monitoring because inferring emissions from changes in atmospheric concentrations of greenhouse gases is difficult, as they depend strongly on meteorological conditions.

Professor Janet Barlow of the University of Reading explains: “Our measurements of actual changes in CO2 emissions during the pandemic and as restrictions ease over the coming months will provide valuable evidence to verify estimates of how much emissions might change due to actions taken to tackle global warming.

“Meeting the UK’s targets to significantly cut greenhouse gases by 2030 and achieve net zero by 2050 will depend not just on technological advances but also on permanent shifts in behaviour, such as increased cycling, walking or use of public transport - rather than taking a car - and home working becoming the norm for many people.”

The two graphs below show reductions in CO2 emissions, compared to the seven-year (2012-2019) average, since the start of the first lockdown on 23 March 2020. 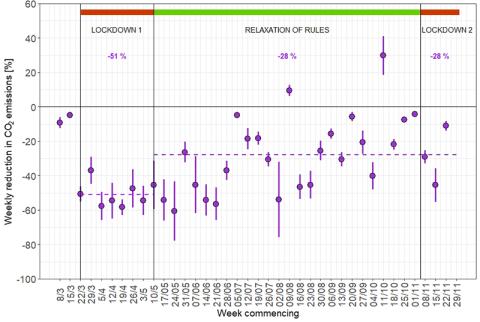 Above: Percentage reductions in CO2 emissions for 12pm-6pm compared to the seven-year average (2012-2019) on a week-by-week basis 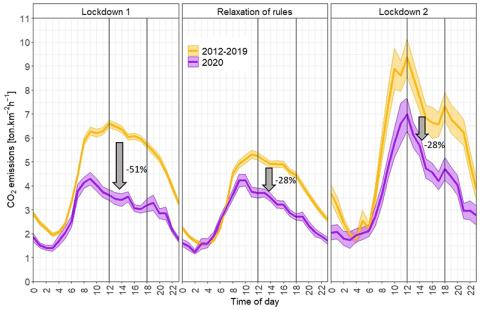 Above: Measurements of CO2 emissions (in tonnes per km2 per hour) by time of day, compared to 2012-2019 averages for the same time of year. Please note that the scientists used 12 pm-6 pm for comparison between the three phases because emissions can take longer to rise from street level during colder months, meaning there is less confidence on data from the winter mornings. Values may differ from previously published values based on the same measurements because the present analysis is based on a larger set of available data. 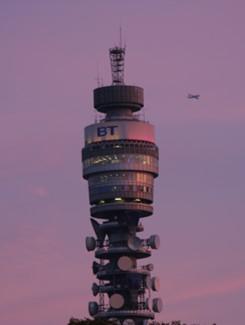 Measurements of carbon dioxide emissions in London were taken from a monitoring station on top of BT Tower.