•    Invasive alien plants and animals threaten other wildlife and cost Europe’s economy over €12bn a year
•    By taking key actions, companies and the public can help prevent spread of these harmful species

A new Europe-wide awareness campaign is calling on everyone to prevent the spread of invasive alien species.

A series of materials including posters, animations and social media graphics, to get the key messages out to key audiences, have been developed through a European Commission-funded project.

It was led by the UK Centre for Ecology & Hydrology (UKCEH) and the Atlantic Technological University, Ireland, and involved government agencies, trade organisations, NGOs and research institutes across Europe.

Alien (or non-native) species, which are moved from their natural range to other parts of the world by humans either intentionally or un-intentionally, are increasing globally. A small proportion of these alien species spread and cause problems – so called invasive alien species.

Invasive alien plants and animals are a major cause of biodiversity loss because they outcompete other wildlife, prey on other species or spread disease. They can also damage crops and infrastructure and put human health and wellbeing at risk.

There are now more than 80 invasive alien plants and animals of concern in the EU to which restrictions on their import, transport, sale and purchase apply, and a similar number of species are affected by rules in the UK.*

The new campaign urges people and businesses to ‘Beware of Aliens’, by enhancing understanding of the threat posed by Invasive Alien Species and taking appropriate, specific actions that will prevent the spread and establishment of these species. In the UK, you can record any non-native species online through iRecord.

Owners of aquatic plants and animals

The threats: Invasive alien species that escape or are released from garden ponds and aquaria can end up in rivers, lakes and oceans, and often reproduce rapidly. An example is the pumpkinseed, which is an aggressive fish with a varied diet, and has caused declines in local populations of fishes, invertebrates and amphibians. Another is the signal crayfish, which threatens native European crayfish species by competition for food and spread of disease.

Floating pennywort and broadleaf watermilfoil are examples of invasive alien plants that are major threats to biodiversity, as their rapid growth reduces sunlight and oxygen, resulting in the death of native plants.

Actions:
•    Don’t release aquarium or pond species.
•    Responsibly dispose of unwanted plants and aquarium water.
•    Buy aquatic plants and animals that are known not to be invasive.

The threats: Invasive aquatic plants such as floating pennywort clog waterbodies preventing fishing and can spread from a tiny plant fragment. Invasive plants that produce many seeds and grow to outcompete native species include Himalayan balsam and giant hogweed (which also causes painful blisters on skin). Quagga mussels, which attach themselves to boats and fishing equipment, suffocate native molluscs. They also clog pipes of water treatment facilities, industrial plants and power stations, and are expensive for companies to remove.

Actions:
Check, Clean, Dry
•    Check fishing equipment, clothing and boat for mud, aquatic animals or plant material.
•    Clean everything thoroughly.
•    Dry equipment and clothing for as long as you can before reusing, because some invasive plants and animals can survive for over two weeks in damp conditions.

The threats: Some animals imported as pets have escaped or been released into the wild, including many of the 50 million sliders (turtles) introduced to Europe. These invasive species threaten native turtles by outcompeting them for basking and nesting sites, and can transmit salmonella to humans.
Pallas’ squirrels are already present in Belgium, France, Italy, the Netherlands and Sweden, and there are concerns this species could expand across Europe. Like grey squirrels, they seriously threaten the native red squirrel through competition for food and cause damage to trees through bark stripping, which has a significant economic impact on the forestry sector.

Actions:
•    Buy pets that are known not to be invasive.
•    Keep pets secure so they do not spread disease to other animals or escape.
•    Do not release your pets into the wild – this is not good for your pet or for nature.
•    Think about how you can care for your pet and what you will do if you can no longer keep it.

The threats: Plant material from invasive alien species including seeds or root fragments can stick to shoes, vehicle tyres and equipment, and be transported into forests and other habitats. Some garden plants can become invasive if they spread into the wild. Highly invasive alien species include the tree of heaven, which is widespread across Europe after being grown in gardens and parks. It reproduces very quickly and outcompetes native plants, with knock-on impacts on animals in the ecosystem, and its root system can damage foundations of buildings, sewers and pavements.

Actions:
•    Talk to garden experts and choose plants that are not likely to be invasive.
•    Dispose of your plant waste responsibly – Be Plant Wise.
•    Check your clothing, shoes, tyres and equipment, removing plant material and soil, so you are not transporting to the wider environment.

The threats: Plant material from invasive alien species including seeds or root fragments can stick to shoes, vehicle tyres and equipment, and be transported into forests and other habitats. Alien plants threaten woodlands by outcompeting native species and spreading pests and diseases, while invasive animals can destroy habitat.
For example, the Kudzu vine is a densely-packed climber that blocks sunlight from native shrubs and trees, sometimes fatally, which is detrimental to the insects that rely on them for food and shelter. Kudzu also has a negative impact on timber and crop production.
Invasive alien ants, such as the little fire ant, displace native ants, and disrupt natural ecosystem processes such as soil processes, pollination and seed burial.

Actions:
•    Check and clean clothing, equipment and vehicles to prevent transporting species.
•    Do not dispose of unwanted plants, soil, rubbish etc. in woodland.

Watch the animations for forest workers and visitors.

The threats: Alien species that live in the soil, including plant seeds and roots, as well as tiny animals, can hitchhike on clothing, tools and vehicles. They can overgrow or infest their new environment, and threaten buildings, roads, rivers, wildlife and crops. For example, the New Zealand flatworm is an aggressive predator of earthworms, with negative impacts on plant productivity and the birds and mammals that feed on other worms. Invasive alien plants include the Chilean rhubarb, whose large leaves prevent other plants from growing beneath, block drains and streams, degrade agricultural land and recreational areas, and cause soil erosion.

Actions:
•    Remove soil, plant material and tiny animals from your boots, machinery and trucks between jobs.
•    Check the soil you are about to move for potential invasive alien species.

The Intergovernmental Science-Policy Platform on Biodiversity and Ecosystem Services (IPBES) has highlighted invasive alien species as one of five major causes of biodiversity loss, along with changes in land and sea use; direct exploitation of organisms; climate change; and pollution.

Professor Helen Roy of the UK Centre for Ecology & Hydrology, who is co-leading a major global assessment of invasive alien species for IPBES, says: “I am passionate about protecting our amazingly diverse natural world which provides countless benefits for other wildlife as well as people, but currently faces multiple threats, including invasive alien species.

“Some alien plants and animals have significant, irreversible negative impacts on ecosystems, economies and society once they become established in a region. Therefore today we are asking people to help prevent the spread of these invasive alien species across Europe, by implementing thorough biosecurity checks, including checking, cleaning and drying equipment and clothing.”

The EU Biodiversity Strategy aims to minimise and, where possible, prevent the establishment of alien species in the environment and halve the number of Red List species they threaten by 2030.

Humberto Delgado Rosa, Director for Biodiversity at the European Commission, says: “Invasive alien species (IAS) are one of the five main drivers of biodiversity decline globally and in the EU, and may also have an impact on human health and the economy. They pose a formidable challenge, not least because the ongoing and projected increase in global trade and travel, together with climate change, are expected to increase the introduction and establishment of IAS.

"For this reason, the Commission has supported this project, aiming to raise awareness, understanding and cooperation on the problem of biodiversity loss and other damages resulting from IAS by bringing the key European stakeholders together.”

For further information, please contact Simon Williams, Media Relations Officer at UKCEH, via simwil@ceh.ac.uk or +44 (0)7920 295384. The posters and animations are available to download. Social media cards and photos of invasive species are available on request.

Prof Helen Roy of UKCEH (hele@ceh.ac.uk), Prof Frances Lucy (frances.lucy@atu.ie) and Tim Adriaens of INBO, Belgium (tim.adriaens@inbo.be), who were among the scientists involved in the project, are available for interview.

The seven different posters (in several European languages) and the six animation videos are available on the European Commission website. The resources were developed as part of ‘Invasive alien species: improvement of understanding and communication’ (ENV.D.2/SER/2019/0006), a project funded by a grant of 875,000 euros from the European Commission.

There are more than 14,000 alien (non native) species in Europe and around 15 per cent of these negatively affect biodiversity, the economy or society and are termed ‘invasive alien species’. They are one of the greatest threats to biodiversity alongside climate change and habitat destruction/fragmentation. Alien species arrive in new regions in many different ways. Some, such as garden plants, are intentionally introduced, while others arrive unintentionally for example as hitchhikers or stowaways including pests hiding in imported produce or aquatic species hitchhiking in the ballast water of ships.

* The gov.uk website lists restrictions on some invasive non-native plants and animals in the UK.

The European Commission has a list of more than 80 invasive species of concern which has recently been extended. This is partly based on a ‘horizon scanning’ approach coupled with comprehensive risk assessments undertaken by experts including scientists from UKCEH who carried out a systematic examination of information to identify the invasive species that will cause particular threats in future, in order to inform better management and policy.

ATU is a multi-campus technological university in the west and northwest of Ireland that delivers a rich combination of academic and research excellence, quality of life and opportunity.
www.atu.ie / @atu_ie

About the Research Institute for Nature and Forest (INBO)

INBO is the independent research institute of the Flemish government that underpins and evaluates biodiversity policy and management through applied scientific research, data and knowledge access.
www.vlaanderen.be/inbo / @INBOVlaanderen

About the European Commission 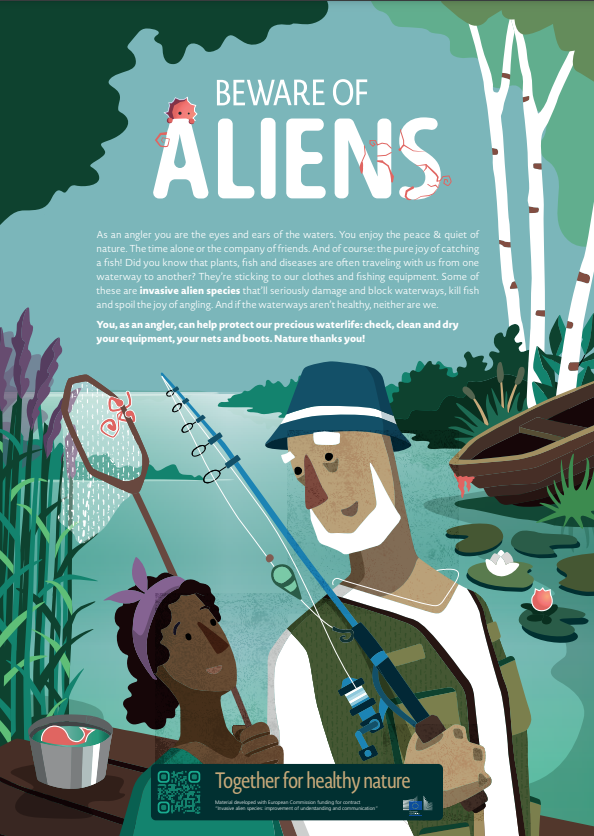 There are seven posters about invasive alien species targeted at different audiences, including one aimed at anglers. 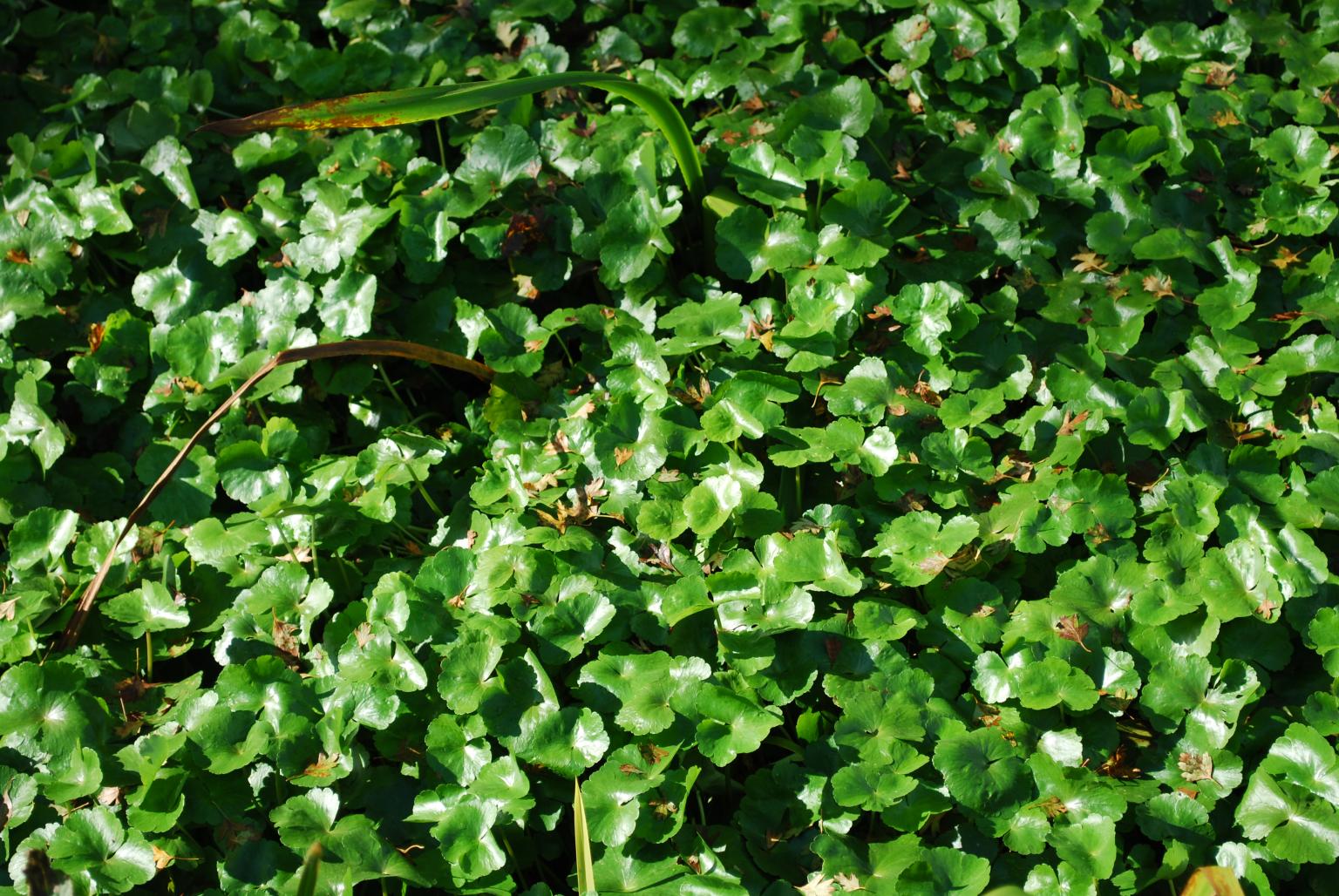 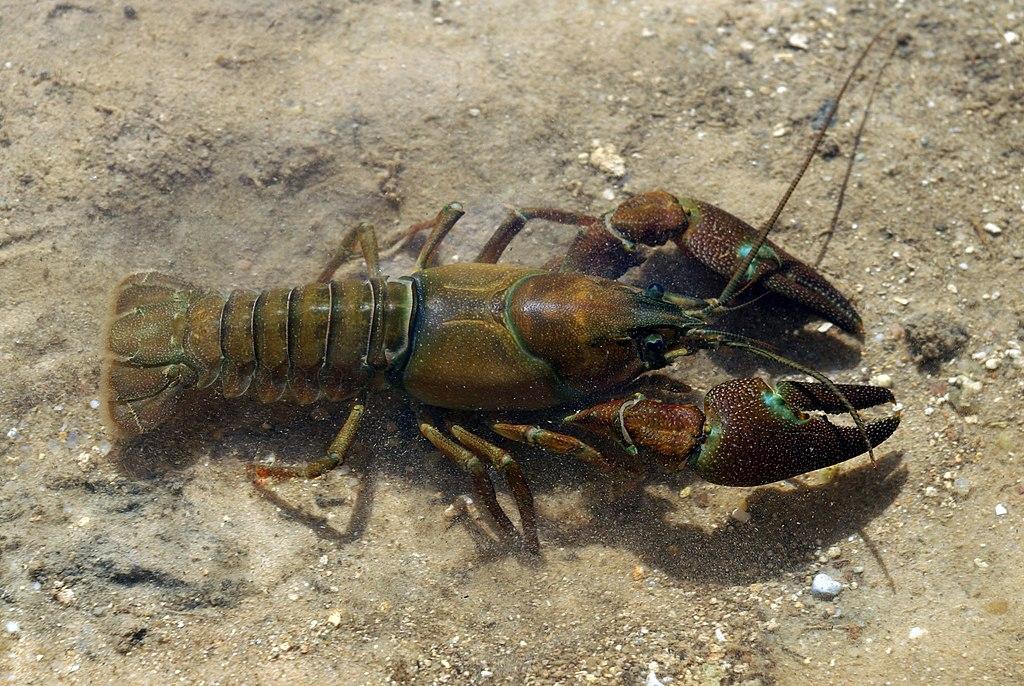 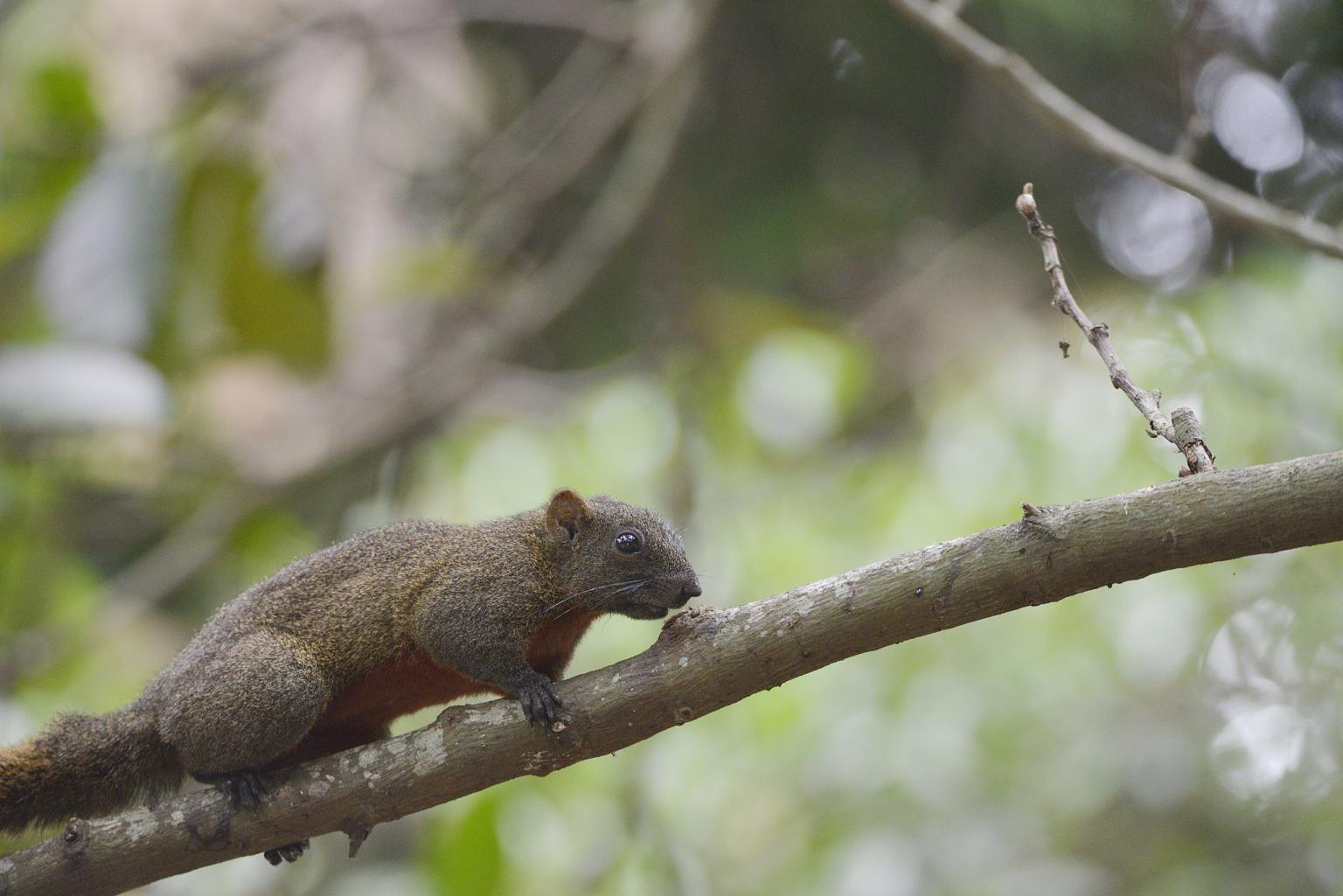 Pallas’ squirrels are already present in some countries and there are concerns this species could expand across Europe. Photo: LiCheng Shih, CC BY 2.0 via Wikimedia Commons