Butterflies are well placed among British terrestrial insect and other invertebrate groups to act as indicators of the state of the environment. They are highly sensitive to environmental conditions and have rapid lifecycles. In addition, they have widespread appeal and as a result we have developed a good understanding of their ecology in the UK and have an incredible wealth of data on the distribution and abundance of most of the UK's 59 resident and regularly occurring migrant species.

The UKBMS uses a structured survey methodology to monitor butterfly populations across the UK year-on-year. This long-term butterfly data enables us to assess the impacts of climate change, land use and the progress of policy initiatives such as the UK Biodiversity Action Plan, agri-environment schemes and site condition monitoring of Sites of Special Scientific Interest (SSSIs). 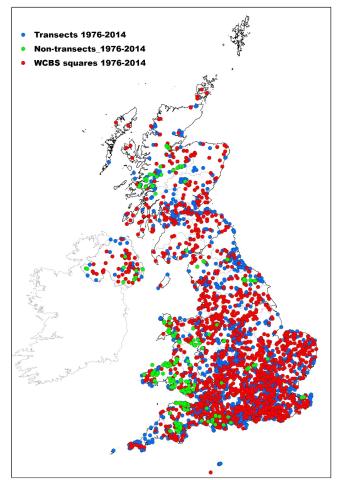 The UKBMS is a long-term scheme monitoring butterfly populations across the UK. It has developed from the merger of the long-running Butterfly Monitoring Scheme (BMS) originating at the Centre for Ecology & Hydrology (CEH) in the early 1970s, with Butterfly Conservation's coordination of 'independent' butterfly monitoring transects.

The objectives of the scheme are to:

The scheme is indebted to all volunteers who contribute data.

The UKBMS comprises data collected by thousands of volunteers annually since 1976 from more than 4000 sites.

Monitoring data consists of a number of different survey types, greater detail of which can be found on the UKBMS website. These include:

There has been a great development in data capture techniques in recent years in the UKBMS. An online recording system is now in place and will phase out the Transect Walker programme developed previously, specifically for capture of transect data. The online system also allows data entry for other survey types and enables recorders to visualise theirs and others’ data much more easily and as the season progresses rather than only at the end. The UK is split into distinct regions, for each of which there is a regional coordinator responsible for collecting and checking the data from all monitoring sites in that region. Data from regional coordinators is then sent to Butterfly Conservation where it is compiled into one dataset. The data is then sent to CEH where it is appended to the main UKBMS database in Oracle and undergoes a series of automated and manual validation processes.

Both transect counts and timed counts provide an annual estimate of the abundance of a butterfly species at site. This site index is not an absolute measure of the size of a population, but has been shown to relate closely to other, more intensive, measures of population size such as mark, release, recapture (MRR) methods. The site index can be thought of as a relative measure of the actual population size, being a more or less constant proportion of the number of butterflies actually present.

Although a relative measure, site indices can be combined to derive regional and national collated indices and be used to estimate trends over time. However, this collation is not a straightforward calculation because not all of the 1000 or more transect sites in the UKBMS dataset have been recorded each year; some transect sites have operated for twenty years or more but the great majority have not and some have only been recorded for a few years. A statistical model is therefore needed to produce a regional or national index of how butterfly populations have changed each year.

In common with most butterfly and bird monitoring schemes in Europe, a log-linear Poisson regression model is used. In this approach, the expected count at a particular site in a given year is assumed to be a product of a site and a year effect. Put more simply, the model attempts to take account of the fact that some years are generally better than others for numbers of a particular butterfly species (the year effect), e.g. if weather is generally favourable. Similarly, the model accounts for some sites supporting higher numbers of a particular species than other locations (the site effect), eg. if habitat conditions are highly suitable. In this way, for years where a transect site has not been recorded, the model imputes an estimated site index that allows for the general conditions of the year in question and the how favourable the site is. The national collated index is then calculated as the mean (on a log scale) of the imputed and recorded site indices for each year.

Long-term and decadal trends are calculated for each species at UK and country level where sufficient data is available, using linear regression models on the national collated indices. Biodiversity indicators use multi-species (composite) indices of abundance for different groups of butterflies e.g wider countryside and habitat specialist species, and butterflies in different habitats e.g farmland and woodland. Composite indices are calculated following methods developed for UK birds, derived by calculating the geometric mean index across each species assemblage. Trends and confidence intervals in these indicators are then assessed by structural time-series analysis using the program Trendspotter. These indicators are updated and published annually.

The raw count data collected on standard UKBMS transects is also used to calculate phenological metrics for each butterfly species (eg. first appearance, length of flight period). A linear regression analysis is then used to determine long-term and decadal trends in the timing and duration of butterfly flight periods for each species.

The key findings from the UKBMS are described in detail on the website. The primary output from the UKBMS is a series of annual updates on the status of butterfly populations across the UK and at country-level. Each year a summary of changes including long-term and decadal trends for each species in the UK, England, Scotland, Wales and Northern Ireland is provided on the UKBMS website and disseminated at the Annual Recorder’s Meeting, held in March each year.

Composite species indices, and trends in these, are also produced and have led to one of the most valuable outputs of the data as governmental Biodiversity Indicators. UKBMS data has been used to produce a number of indicators including: 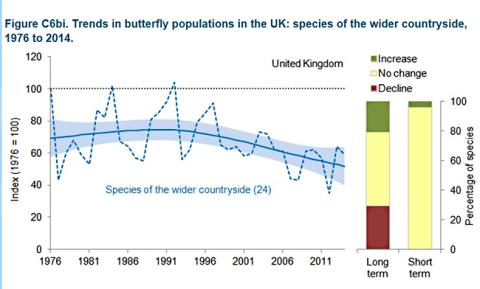 Together with butterfly monitoring data from more than 20 other countries, UKBMS data has also contributed to two pan European indicators to help assess progress with the EU Biodiversity Strategy. These are the European Butterfly Indicator for Grassland species and the Butterfly Climate Change Indicator. The latest grassland indicator (1990-2013) shows a marked decline in grassland butterflies across Europe since 1990, whilst the climate change indicator shows a significant and rapid increase in European butterfly communities becoming more and more composed of species associated with warmer temperatures between 1990 and 2008.

Every five years, single species and composite species trends in abundance using the UKBMS data are compiled with concurrent trends in distribution calculated using data from the Butterflies for the New Millennium (BNM) to report on the change in status of the UK’s butterflies. These are documented in atlases and more recently the State of the UK’s Butterflies reports led by Butterfly Conservation. The State of the UK’s Butterflies 2015 report shows a worrying continuation of butterfly declines in the long-term with 76% of the UK’s resident and regular migrant butterfly species declining in either abundance or distribution (or both) over the past four decades.

Of major concern is the recently observed declines in the UK’s more common and widespread wider countryside species. The group as a whole has shown a 25% decrease in numbers across the UK since 1976, with a number of the species contributing to the composite index now ranking among the most severely declining UK butterflies. The Wall, Lasiommata megera, and Small Heath, Coenonympha pamphilus, are two such species showing significant declines in abundance on monitored sites between 1976 and 2014 of 87% and 54% respectively.

UKBMS data is also used for a wide range of research projects, providing important insights into the effects of climate change and land use in particular, and resulting in numerous high-impact papers and reports including the State of Nature report led by the Royal Society for the Protection of Birds (RSPB) documenting trends across multiple taxa.