Focus groups reveal local tensions and the need for dialogue

Dr Susan Conlon (Bristol University) reports back on her first social field trip in Boyacá (Colombia) with her colleagues Dr Maria Paula Escobar-Tello and Lauren Blake (Bristol University).  Her important contribution to the PARAGUAS project is to establish how people are interacting with the functioning of the high-altitude páramos, the source of water for many in Colombia.

In July 2019 we came back from our first social science fieldwork trip. Maria Paula Escobar and I, together with Lauren Blake1, set out to explore the different sets of socio-cultural and political tensions emerging from land and water use change in the páramos, partially provoked by controversial state conservation policies. We spent three weeks traveling between Bogotá and the Guantiva-La Rusia páramo, in the department of Boyacá, to understand the changing physical and social landscape of the páramo. Through interviews, focus groups and informal discussions we collated opinions, insights and information from government, NGOs, community organisations and farmers.

As well as providing important data to explore our research questions, the trip reinforced previous impressions by PARAGUAS team members about the pressing need to critically consider how project participants can access and use the knowledge generated by PARAGUAS, so that we might have a lasting impact on environmental decision-making in the region.

It is now already the end of September and I will soon return to Colombia for a second round of data collection in October. So although not hot of the press, this is a summary which I felt compelled to share with you.

Through listening, we wanted to establish how local people articulate their understanding of the water regulation function of the páramos and how they and other actors perceive their impact on this ecological role of the páramos. Research on environmental tensions and conservation has examined the recent changing character of natural resources, including water, from being seen as rights to be protected by the state, to commercial assets for private exploitation. Others have explored conservation policies and their recognition of, and engagement with diverse ecological knowledges and socio-cultural practices in particular ecosystems. Drawing from these approaches we wanted to understand if and how the historical circumstances and livelihood practices of páramo inhabitants, often rooted in páramo resources, have been considered in state policies aimed at protecting the páramos. What are the consequences of these policies on the social relations and livelihoods of people living in and around the páramos?

Where we were and what we did

We began our journey in Bogotá where we interviewed key institutional players in Bogotá with influence over environmental decision-making in the páramos nationally. We interviewed members of the Humboldt Institute, the Ministry of Agriculture and Colombia´s Agricultural Society, the country´s largest farming trade union. We also spoke to academics from the National University.

From there, we moved on to Tunja, the capital of  Boyacá department, lies approximately three hours northeast of Bogotá. There we met with our local field technician and logistics' manager, Jeffrey Prieto, and proceeded to interview members of the regional government department and Corpoboyacá. Corpoboyacá is an important political actor in environmental decision making. It is responsible for administering environmental plans and projects in Boyacá and establishes the norms and directives for watershed management in accordance with national legislation and policies. These were crucial sets of interviews that set the scene for the kinds of tensions and dynamics we would encounter in our interactions with the people living in and around the Boyacá páramo.

As we set about the second phase of our fieldwork which was about understanding the local context, we were joined by Rebecca Andrasko, an MSc student working with the project's environmental economists, Dominic Moran and Juan Afanador (University of Edinburgh).  Our focus sites were the municipalities of Duitama, Santa Rosa de Viterbo, Belén, Tutazá and Susacón and the rural populations governed by these municipal authorities who are living within or near the contested boundary of the Boyacá páramo.

The Boyacá páramos cover an immensely diverse, breath-taking terrain of undulating hills and micro watersheds, with varying degrees of human activities manifest in, for example, planted potato fields, horse and cattle grazing, the tillage of land to drain water or the artificial piping of water to facilitate transfer between homes and villages. Rural populations in Colombia are called veredas, a territorial division so-called due to their formation along the veredas or paths that historically enabled communications between municipalities2. A focus on these municipalities and the respective veredas allowed us to explore the multi-faceted and place-based nature of local tensions related to páramo national conservation policy.

Based in Duitama, we interviewed those involved in environmental planning in each of the municipalities, as well as water authorities, such as Empoduitama, charged with protecting the water sources and aqueducts in the páramo. Using contacts developed in our previous fieldwork campaign, we arranged focus groups with members of the Community Action Board (Juntas de Acción Comunal) and Water User Board (Juntas de Acueducto) in each vereda. The Juntas are local organisations important for their influence in land and water decision-making and local norm-setting. These activities were coupled with one-to-one interviews with farmers, sometimes outdoors and walking, or at home with other family members, where we were often treated to a tinto campesino, a black coffee brewed with panela (a block of raw sugar cane).

We kickstarted the group activities by asking people to draw a map of their vereda and the important sites and resources, including sources of water, in the area, not with the intention of developing an accurate map per se, but rather as a prop to trigger a group discussion about their relationship with the páramo and how land and water had changed over time.

These discussions proved to be more difficult than expected: participants challenged us to justify our presence in their village, our interest in water in the páramo and to explain the rationale for our questions. Accusations of working for a “multinational” with underhanded intentions to steal their water or knowledge thereof, revealed a latent concern for protecting their resources and a recurring mistrust of authority and ´experts´ in the region. While these conversations sometimes prolonged the activity, to the detriment of our planned questions, it proved to be an important space for residents to air their concerns and for us, as researchers to attempt to build trust, not to mention how revelatory they were about the local tensions and how these tensions are perceived by the páramo populations, who have strong opinions about some of the actors involved.

For me these group activities highlighted that, if our intention is to have a lasting impact on environmental decision making in the region and to take seriously the concerns of those most vulnerable to both the impacts of climate change and policies introduced to address them, then we must ask the participating groups how they would like the knowledge generated by our project to be accessed and used.

What was blatantly clear from speaking to local inhabitants was their genuine concern about the degraded state of the paramos, their often frank recognition of the impact of their activities, as well as their openness to adapting their livelihood practices, even uprooting their homes if necessary, in the search for alternative ways of living around the páramo. However, they cannot and should not be expected to do this without dialogue and participation in the formulation of policies directly concerning their lives and livelihoods. Environmental authorities and researchers alike must work with people locally to understand their often-complex life and family histories and everyday development needs and concerns to endeavour to find genuinely feasible and meaningful alternative ways of living.

The Paraguas team is currently analysing the data gathered on this trip with a view to returning to Colombia for a second round of data collection in October 2019.

2 There are over 30,000 veredas in Colombia, home to a quarter of the national population. 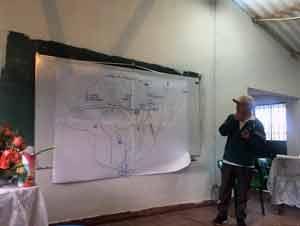