Climate change will increase temperatures and change rainfall across England, Wales and Scotland. In turn, this will modify patterns of river flow and groundwater recharge, affecting the availability of water and changing the aquatic environment. There have been many studies of the impact of climate change on river flows in different parts of the UK, but coverage is uneven and methods vary. This means it is difficult to compare different locations and so identify appropriate adaptation responses.

The Future Flows and Groundwater Levels (FFGWL) project addressed these issues by carrying out for the first time a consistent assessment of the impact of climate change on river flows and groundwater levels across England, Wales and Scotland. It used the latest projections from the UK Climate Impact Programme, including the UKCP09 probabilistic climate projections from the Met Office Hadley Centre.

They represent a nationally consistent ensemble of 11 plausible realisations (all equally likely) of almost 150 years of climate, river flow and groundwater regime, and enable us to investigate the role of climate variability on river flow and groundwater levels nationally and how this may change in the future. Considering all ensemble members together accounts for some climate change uncertainty.

The Future Flows Project was a partnership project co-funded by the Environment Agency of England and Wales, Defra, UK Water Industry Research, the Centre for Ecology & Hydrology, the British Geological Survey and Wallingford Hydrosolutions. The project ran between March 2010 and Spring 2012.

Possible uses for FFGWL products and datasets include:

FFGWL used the latest climate change projections available from the UKCIP for UK climate change impact assessment. In particular, it exploited the following UKCP09 products to assess changes in river flows and groundwater levels across England, Scotland and Wales.

Climate projections generated from Global or Regional Climate Models (RCM) are not suitable for direct use in hydrological models because of differences in scale between modelled atmospheric processes and hydrological processes. Based on the latest scientific knowledge of how to exploit RCM outputs in hydrology, a bias-correction and downscaling procedure was implemented over Britain to generate Future Flows Climate.

The advantage of the regionalised parameter model is that it extends the climate range under which the model parameters are evaluated; this is particularly important in a warming climate for catchments where it is possible that evaporation processes might be water-limited. The advantage of catchment calibrated models is that they are designed to reproduce the best local hydrological processes.

To capture the range of climate, land use, geological and geographical characteristics found in England, Wales and Scotland, the project modelled a total of 282 river catchments and 24 boreholes. For details of the sites involved and the data, please see the future flows hydrology station list for April 2012 (PDF, 1.13mb). The sites were chosen because they had good records and the hydrological processes could be well reproduced by conceptual hydrological or groundwater level models. 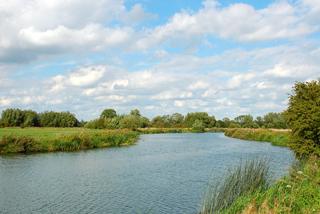