The Whim experimental bog is a globally unique study of how peatland ecosystems respond to different levels and forms of nitrogen (N) deposition. In operation since 2002, the field manipulation experiment provides a quantified ammonia (NH3) concentration / deposition gradient to an ombrotrophic bog, plus separate wet treatments comparing different levels of oxidized (NaNO3) and reduced (NH4Cl) N deposition. The site also includes treatments with phosphorus and potassium (K2HPO4) at two N doses to compare N effects with and without limitations of other nutrients. 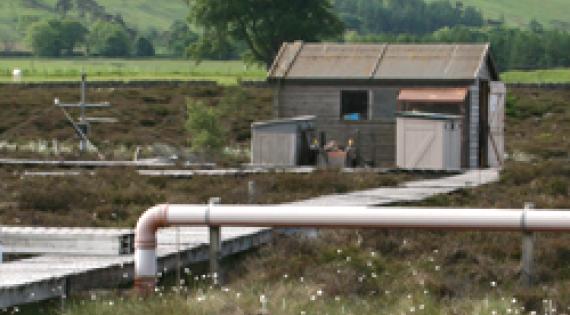 Take a  360degree virtual tour of the site

The dry NH3 treatment is controlled with an NH3 release system which is determined by wind direction measured every five seconds by a sonic anemometer. An automated free air release creates a gradient of NH3 concentration along the transect, with average annual concentrations ranging from ambient (c. 0.5 µg NH3 m-3) to up to 100 µg NH3 m-3. Peak concentrations during fumigation events can reach 1600 µg NH3 m-3. Annual NH3-N deposition along the transect in 2003–2006 was calculated as 3.0 kg NH3-N ha-1 y-1 in ambient air and 50–70 kg NH3-N ha-1 y-1 at annual average air concentrations of 70–90 µg NH3 m-3 (Cape et al 2008: Atmospheric Environment, 4: 6637-6646).

Wet treatments are supplied when meteorological conditions are appropriate. Rainfall is collected on site and stored in a reservoir; when the reservoir is full, rainwater is pumped through a network of pipes, dosed with the appropriate N form and concentration, and sprayed onto the experimental plots. Spraying only occurs when the wind speed is below 5m s-1. Wet deposition plots are large (13m2), each with four replicates. Nitrogen deposition treatments in the wet plots are 8, 24, and 56 kg N ha−1 y−1 above ambient (8-11 kg N ha-1 y-1). The additional PK treatments are supplied at two N doses (8 and 56 kg N ha-1 yr-1) by addition of K2HPO4, with P at a 1:14 ratio to N (16 plots).

Wet treatments are closed down during freezing conditions and re-activated when night temperatures rise above 0°C. Dry treatment continues throughout the year, with the exception of routine maintenance times.

After one year, deleterious effects of high concentrations of dry-deposited NH3 could be measured on several key species. Over time, damage has been detected further down the transect at lower concentrations and with accumulated N dose, and is linked to secondary environmental stresses such as cold winters or dry summers. Calluna and species of Cladonia lichen and the bog moss Sphagnum have now disappeared from parts of the dry NH3 transect where inputs exceed 10 kg N ha-1y-1. Similar levels of wet N deposition have not caused the same degree of direct vegetation damage or species loss, and may be associated with longer-term ecological and ecosystem change. Measurements of key ecosystem functions have identified a range of ecosystem services that respond in different ways to different N forms, particularly carbon sequestration and greenhouse gas (GHG) emissions.

Equipment and instruments available on site