Tropical rainforests are often called the “lungs of the planet” because they generally draw in carbon dioxide and breathe out oxygen. But the amount of carbon dioxide they absorb, or produce, varies hugely with year-to-year variations in the climate. A new paper published this week in the journal Nature shows that these variations reveal how vulnerable the rainforest is to climate change.

Dr Chris Huntingford, a climate modeller with the Centre for Ecology & Hydrology (CEH) joined a team of scientists from the University of Exeter and the Met Office Hadley Centre to carry out the study.

The study reveals a new way to find out how sensitive biological systems are to changes in climate. The key was to learn how to read the year-to-year variations in the concentration of carbon dioxide in the atmosphere.

The paper's lead author, Professor Peter Cox of the University of Exeter, explained that scientists have been struggling for more than a decade to answer the question of whether the Amazon forest will die back under climate change. He said, "Our study indicates that the risk is low if climate change is associated with increased plant growth under elevated carbon dioxide. But if this effect declines, or climate warming occurs due to something other than a carbon dioxide increase, we expect to see a significant release of carbon from tropical ecosystems."

Carbon dioxide increases each year as a result of burning fossil fuels and deforestation. But the amount it goes up from one year to the next depends on whether tropical forests are absorbing carbon dioxide or releasing it – and this in turn depends on whether the tropical climate was warmer and dryer than usual, or wetter and cooler. So the trace of carbon dioxide in the atmosphere holds a record of how the lungs of the planet respond when the climate warms or cools.

By combining this relationship with the year-to-year variation in carbon dioxide as seen in the real world, the team were able to determine that about 50 billion tonnes of carbon would be released for each degree Celsius of warming in the tropics. Peter Cox said the findings were initially a relief: “Fortunately, this carbon release is counteracted by the positive effects of carbon dioxide fertilisation on plant growth under most scenarios of the 21st century, so that overall forests are expected to continue to accumulate carbon.”

The researchers are certain, however, that tropical forests will suffer under climate change if carbon dioxide doesn’t fertilise tree growth as strongly as climate models suggest, saying that the long-term health of tropical forests depends on their ability to withstand multiple pressures from changing climate and deforestation.

The University of Exeter issued a press release about this paper. 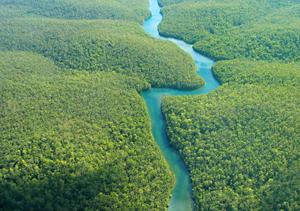