A unique, interactive web portal developed by the UK Centre for Ecology & Hydrology (UKCEH) brings together a wealth of information on the latest hydrological situation across the UK.

The UK Water Resources Portal provides the most up-to-date available data on river flows, rainfall, soil moisture and groundwater levels from a local to a national scale, with users able to view measurements in any part of the country by clicking on an interactive map.

In addition to providing a possible indication of imminent floods and droughts, it also has historical records that enable comparisons to be made with previous significant events from the past 50 years and long-term averages.

The portal collates data from a variety of sources, including the national measuring authorities for river flows and groundwater levels: the Environment Agency (for England), the Scottish Environment Protection Agency, Natural Resources Wales and the Department for Infrastructure - Rivers in Northern Ireland. A help video, below, takes you through its features.

The portal is aimed at anyone with an interest in the current water resources situation:

The information can be viewed on layered maps, including the UKCEH Land Cover Map 2015 and the BGS Hydrogeology 625K, which, respectively, show the type of land use and geology across the UK on a 1km scale. 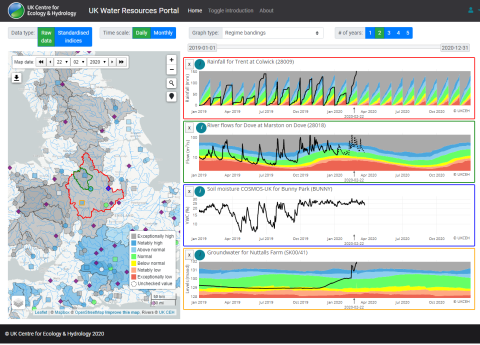 Most of the records for river flows, rainfall and groundwater go back to the 1960s, while the soil moisture data starts in 2014, shortly after the COSMOS-UK network was established.

Principal Hydrologist Jamie Hannaford, who leads the Hydrological Status and Outlooks group at UKCEH, says: “This exciting new portal is unique in three ways. Firstly, it is a ‘one-stop-shop’ that brings all the latest hydrological data together in one place. Secondly, it presents the information in a user-friendly mapping/plotting interface rather than just as static maps or tables. Finally, it provides the detailed and up-to-date local, catchment and national scale data that government agencies and businesses need to make key decisions relating to water resources.

“Tracking the various hydrological elements – how much rain has fallen, how saturated the soil is, how full our aquifers are and how much water is flowing in rivers – will help us better monitor the development of floods and droughts, and manage them accordingly.”

Mr Hannaford thanked the stakeholders, particularly the Environment Agency, Met Office and South West Water who have been involved in the development of the demonstrator version of the UK Water Resources Portal over the past two years, saying their input had been vital in producing the final product.

The portal is available at https://eip.ceh.ac.uk/hydrology/water-resources/

Left, a river flow gauging station on the Derwent at Buttercrambe. Right, the COSMOS measuring station at Rothamsted Research in Hertfordshire 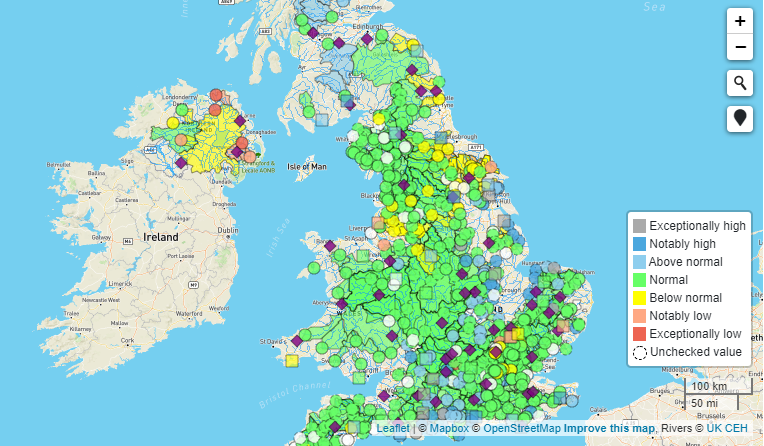