A new interactive online tool is set to encourage tree planting initiatives across the UK. It calculates how much pollution would be removed by planting trees in local areas, as well as the corresponding public health cost savings.

With hundreds of thousands of trees due to be planted across the country over the next three years in Government-backed schemes, the new tool – Pollution Removal by Vegetation – ­takes national data and makes it locally relevant and accessible for councils, NGOs, developers and other businesses that are considering such initiatives. 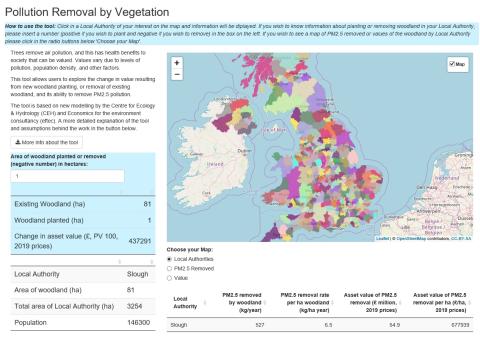 Scientists at the Centre for Ecology & Hydrology (CEH) teamed up with eftec, a leading environmental economics consultancy, to develop the tool, which shows the existing amount of woodland in each local authority in hectares, how much particulate matter (PM2.5) the trees remove from the air and the resulting predicted public health cost saving within that area over a 100-year period.

Based on the number of hectares of woodland someone wishes to plant within a local authority area, it can calculate:

The tool can also estimate the effects of felling existing woodland by calculating the health costs attributable to the PM2.5 that would no longer be removed from the air by those trees.

Plants remove air pollution by providing a large surface area for particulate matter to settle on, and by active uptake of gases into the leaves or chemical reactions with the leaf surface. Collectively these processes are called ‘dry deposition’.

Professor Laurence Jones of the Centre for Ecology & Hydrology says: “There is a lot of public concern about the potential health risks that pollution poses in many urban areas of the UK. While reducing harmful emissions at source is the best way to improve air quality, the addition of vegetation can play a role in removing pollutants within a local area.”

CEH produced a press release on the launch of the online tool, while a webinar hosted by EKN takes you through the tool’s development and uses.

CEH and eftec plan to develop the online tool so it can also calculate the amount of nitrogen dioxide and sulphur dioxide that will be removed by altering the amount of woodland within a local authority area.