March 2018 Hydrological Summary for the UK

March heralded a wintry and cold start to spring 2018 in the UK as spells of mild and wet weather were interrupted by periods of snow, ice and blizzard conditions that brought widespread disruption. In contrast with the very dry February, March rainfall for the UK was notably above average, exceptionally so in southern England and the Midlands, which received almost twice the average. In contrast, north-west England and western Scotland received less than 75% of the average.

River flows increased towards month-end across the UK in response to heavy rainfall and new daily flow maxima were recorded across the country. Flows were generally above normal with exceptionally high flows recorded in south-west England and south-east Scotland. Conversely, some catchments in western Scotland and Northern Ireland registered around half of the average. 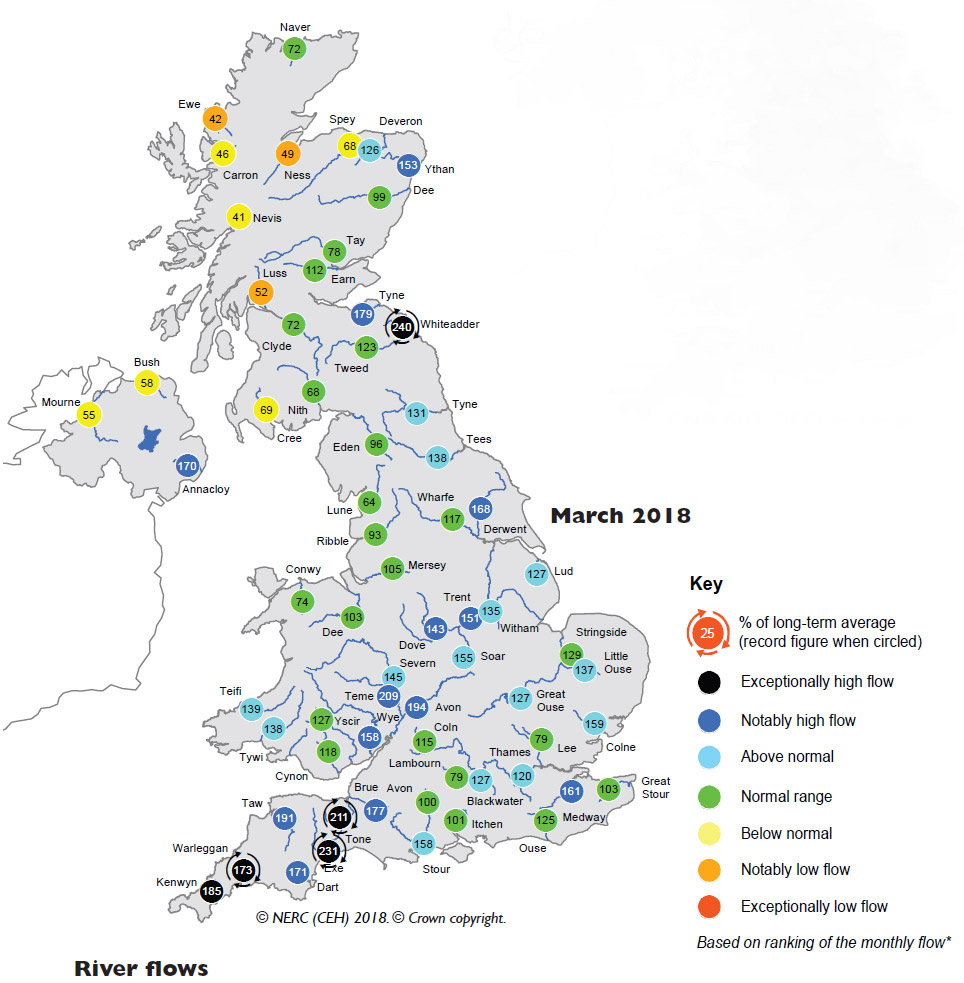 Reservoir stocks were above average in all but a few northern impoundments and many in the south continued to recover from the unseasonably low stocks recorded at the beginning of the year (for example, Bewl was at full capacity by the end of March). Seasonal recovery of groundwater levels continued at most sites and levels were generally in the normal range or higher, apart from in the slower responding Chalk of south-east England.

Summary author Stephen Turner of the Centre for Ecology & Hydrology said, "Overall, wet weather late in the recharge season has significantly improved the outlook for the remainder of spring and summer 2018. In localised parts of the Chalk aquifer (eg the Chilterns) low groundwater levels and river flows may persist, although current low flows and levels are not exceptional."

For the winter half‑year (October-March), the UK received marginally below average rainfall with areas of central Scotland receiving less than 70% of the long-term average.

The monthly summary is a look back at hydrological events occurring in March 2018. Latest information on flood warnings is provided by the Environment Agency, Natural Resources Wales and Scottish Environment Protection Agency (flood warnings for Northern Ireland are not available).