Scientists have identified the location and intensity of key threats to amphibians, birds and mammals across the world to help guide conservation action.

Despite a global biodiversity crisis, there is a lack of information about threats to wildlife and how these affect species on the ground - which is critically important to improving and targeting conservation responses. Therefore, an international research team, which included the UK Centre for Ecology & Hydrology (UKCEH), produced global maps for the six main threats to terrestrial vertebrates. These are: agriculture, hunting and trapping, logging, pollution, invasive species, and climate change.

Dr Nick Isaac, of UKCEH, who was part of the research team, says: “Our study demonstrates the various types and geographic breadth of the threats to terrestrial vertebrate species, and is the first attempt to map this information.”

There are sizeable geographical areas in which there is more than a 50 per cent chance that any particular species is at risk from these threats, according to the study.

In Southeast Asia, particularly Sumatra, Borneo and Madagascar, there is a high risk of impact from all six threats to amphibians, birds, and mammals. For amphibians, Europe stood out as a region of high threat impact due to a combination of agriculture, invasive species and pollution. Polar regions, the east coast of Australia and South Africa are mostly likely to be impacted by climate change, affecting birds in particular.

The scientists behind the mapping study say their work demonstrates the scale of the challenge that an updated international plan to protect biodiversity must address. The 15th Conference of the Parties (COP-15) to the UN Convention on Biological Diversity is due to agree a global plan for nature, to run up to 2030, at a meeting in Kunming, China, next year.

Dr Mike Harfoot of the UN Environment Programme World Conservation Monitoring Centre (UNEP-WCMC), co-lead author of the paper, says: “We are facing a global nature crisis, and the next ten years is a crucial window for taking decisive action to tackle biodiversity loss.”

The researchers plan to improve the information on threats to nature in terms of accuracy and the breadth of species considered. 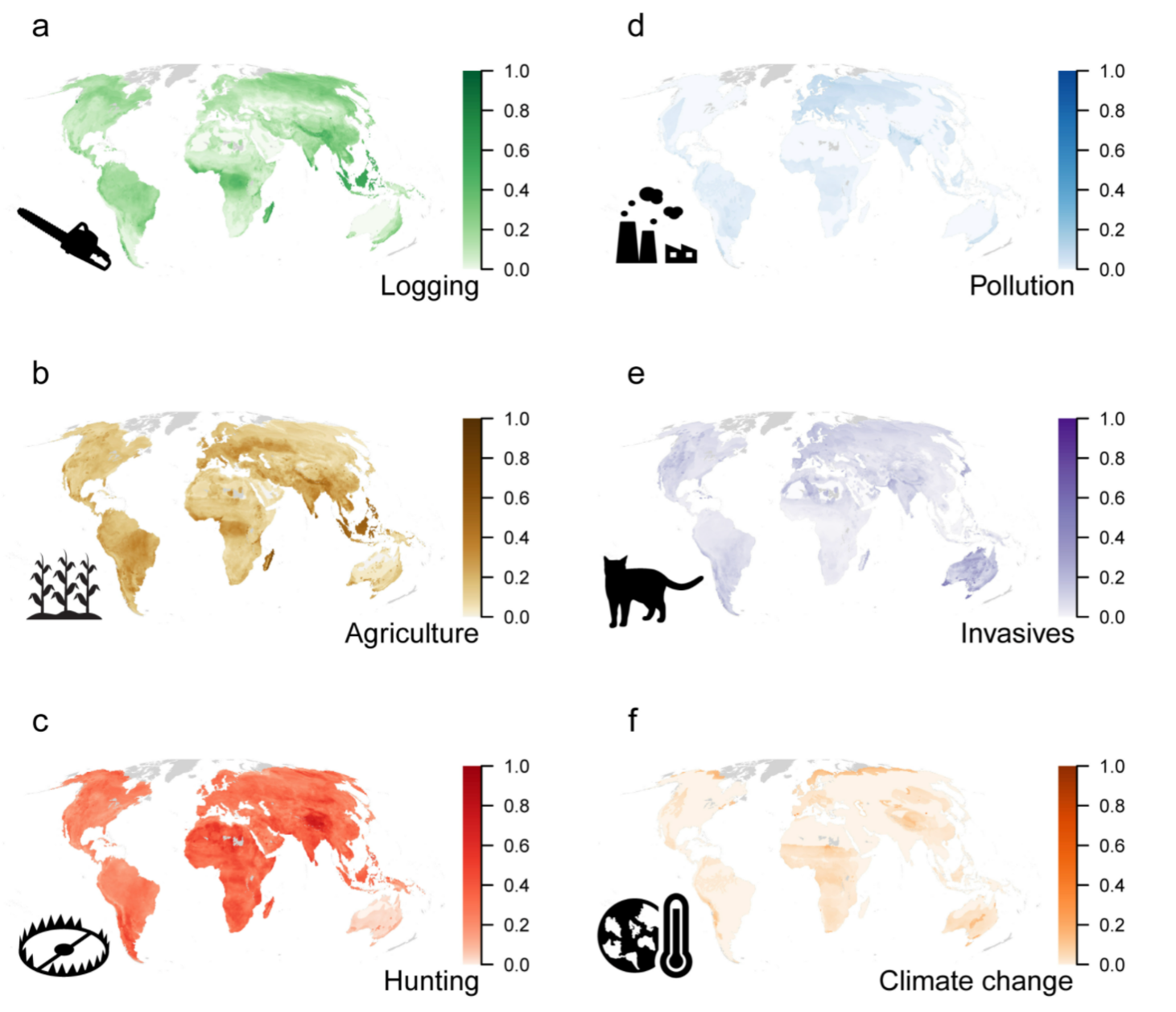 The researchers produced global maps of six main threats to terrestrial vertebrates. A value of 0.0 (lighter colour) on the figure, indicates no species is affected by that threat, rising to 1.0 (a darker colour), where all species are affected.