A new study identifies the most damaging invasive non-native species likely to arrive in the Antarctic Peninsula region over the next decade.

The work by an international research team, led by the UK Centre for Ecology & Hydrology (UKCEH) and the British Antarctic Survey (BAS), will inform measures to prevent and mitigate future invasions. Of the 103 species considered in detail, 13 were identified as most likely to arrive in the Antarctic Peninsula region from other parts of the world and potentially have a devastating impact on the fragile polar biological communities in marine and terrestrial Antarctic habitats.

Marine invertebrates such as mussels and crabs are top of the list of invasive species expected to arrive over the next decade, though button weed and mites were also identified as imminent threats. Mussels, for example, can survive in polar waters and spread easily, threatening marine life on the seabed; their water filtering alters the marine food chain and also the chemistry of the water around them

The research was overseen by Professor Helen Roy, a UKCEH ecologist who is also co-chair of a major global assessment into invasive non-native species by IPBES (the Intergovernmental Science-Policy Platform on Biodiversity and Ecosystem Services).

The study was part of a wider UK government-funded research programme predicting the threat from invasive non-native species that includes all the UK Overseas Territories. The researchers analysed hundreds of academic papers, reports and databases to find the species most likely to invade the Antarctic Peninsula.

Dr Kevin Hughes of BAS, lead author of the study, which has been published in Global Change Biology, says: “The Antarctic Peninsula region is by far the busiest and most visited part of Antarctica due to growing tourism and scientific research activities.

“Non-native species can be transported to Antarctica by many different means. Visitors can carry seeds and non-sterile soil attached to their clothing and footwear. Imported cargo, vehicles and fresh food supplies can hide species, including insects, plants and even rats and mice. Marine species present a particular problem as they can be transported to Antarctica attached to ship hulls. They can be very difficult to remove once established.” 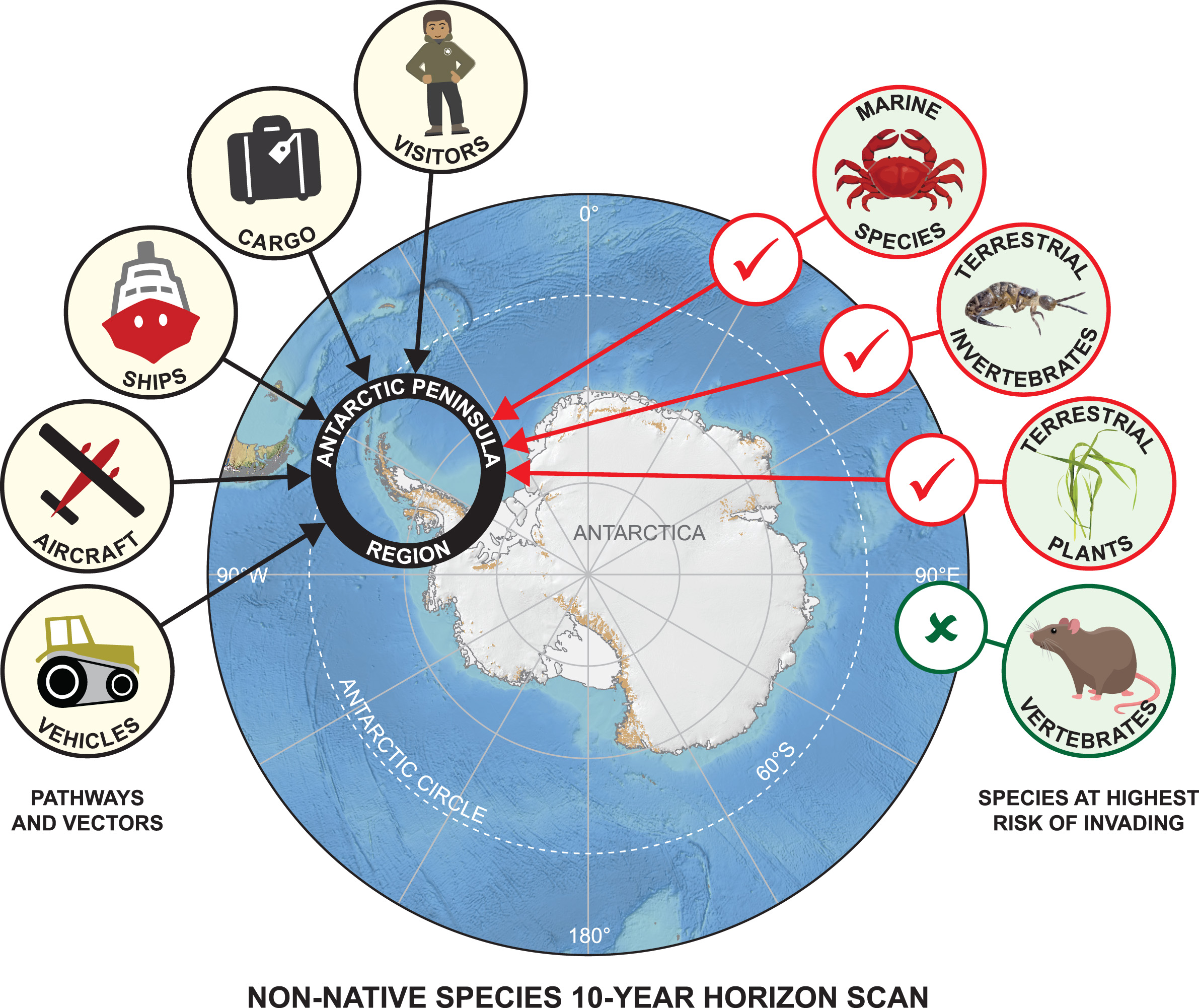 Some non-native species have already established themselves near research stations and visitor sites. Eradication of them is possible but has proven difficult and costly.

While some of the sub-Antarctic islands such as Marion Island and South Georgia have already been invaded by rats, mice or other vertebrates, this is less likely to happen in the Antarctic Peninsula soon.

Professor Roy says: “We think the conditions in the Antarctic Peninsula region will remain too extreme to allow rodents to colonise outside. However, rats and mice could survive by hiding within research station buildings, so everyone needs to remain vigilant for droppings and gnaw marks.

Professor Roy was one of five scientists affiliated to UKCEH who were involved in the study, along with Oliver Pescott, Jodey Peyton, Katharine Turvey and Ian Winfield. In all, there were 33 researchers from Argentina, Austria, Belgium, Cyprus, Ireland, Italy, Spain, the UK (including its Overseas Territories of the British Antarctic Territory, Falkland Islands, South Georgia, the South Sandwich Islands and Tristan da Cunha) and the USA.

The research into predicting invasive non-native species in UK Overseas Territories was funded by the Foreign and Commonwealth Office Conflict, Security and Stabilisation Fund through the GB Non-Native Species Secretariat.

Invasive alien (non-native) species were identified in the landmark IPBES Global Assessment Report 2019 as one of the top five causes of negative change in nature around the world. IPBES (the Intergovernmental Science-Policy Platform on Biodiversity and Ecosystem Services) is an independent body that provides policymakers with objective scientific assessments about the planet’s biodiversity.