New research led by the UK Centre for Ecology & Hydrology (UKCEH) will investigate the impacts of wind farms on seabirds, and produce solutions to protect and increase populations.

The project will receive total funding worth around £2 million over four years from the Natural Environment Research Council (NERC) and The Crown Estate, with support from Defra.

It will support the UK Government’s goal of increasing offshore wind power capacity almost five-fold by 2030, to 50 Gigawatts, as part of the country’s transition towards net zero greenhouse gas emissions and greater energy security.

Concern over the negative impacts of wind farms on seabirds is a key factor determining planning consent for such developments and delaying progress towards the target.

Wind farms affect seabirds due to collisions, displacement from feeding grounds and barriers to migratory routes or regular flight paths. The new UKCEH-led project, called ECOWINGS (Ecosystem Change, Offshore Wind, Net Gain and Seabirds), will provide evidence about the predicted cumulative impacts of all planned offshore wind developments on key seabird species in the North Sea, such as kittiwakes, guillemots, razorbills and puffins.

Researchers will investigate what causes seabirds to change their behaviour when offshore windfarms are built; for example, if they avoid windfarms due to aversion of the turbines themselves, because their prey species have moved elsewhere, or both.

They will also establish how to compensate for any negative impacts and ensure there are net increases in seabird populations despite the effect of wind farms and climate change. Possible measures could include fisheries management and nest creation. The project findings will inform marine and wind power policies.

Dr Francis Daunt of UKCEH, Principal Investigator of ECOWINGS, says: “Seabirds are the top issue affecting planning consent for UK offshore wind developments in the North Sea because of the potential negative effects on their populations. They are also experiencing the consequences of rapid climate change such as rising sea temperatures affecting the availability and quality of prey.

“Accordingly, our project will deliver new evidence and tools for accurately estimating these impacts, and will develop effective compensatory measures that deliver net gain to seabirds and the North Sea ecosystem that incorporate future projections of climate change.”

Mandy King, of The Crown Estate’s Offshore Wind Energy and Change Programme, adds: “We want to help develop an industry that supports the UK’s net zero ambitions and ensures we are positively impacting communities around our coastline and further offshore, including humans and marine life. This cutting-edge research is incredibly important in enabling the responsible development of future wind capacity that respects the needs of all those that depend on a healthy, sustainable marine environment.”

It is one of three new projects within the Ecological Consequences of Offshore Wind research programme (ECOWind), which is funded by NERC, part of UK Research and Innovation, as well as The Crown Estate, and supported by Defra. The programme brings together experts from science and policy to explore how offshore wind affects ecosystems and species, in order to address knowledge gaps and inform policies to minimise negative impacts on marine life while tackling climate change. Visit ecowind.uk 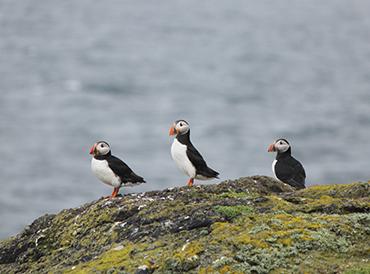 There is concern about the impacts of developments on key seabird species in the North Sea including puffins. Photo: Gwyn Rees.